Mobile phones and PromptPay promise huge convenience and instant payments online, but the Bank of Thailand is already warning that if you lose money or your bank account gets hacked, it will be your fault. (Photo by Pattarapong Chatpattarasill)

Promptpay, the government's new e-payment system may soon revolutionise the way people pay for things they buy in Thailand.

Under PromptPay a person or business will be able to make easy money transfers and payments to buy things online with their mobile phone rather than transferring money at an ATM like many do now, or by paying with a credit card.

The new service is part of a wide-ranging new national e-payment scheme and digital economy drive by the government.

It remains to be seen, however, whether security issues such as malware or viruses as well as privacy and government trust issues will impede widespread adoption of the new system. 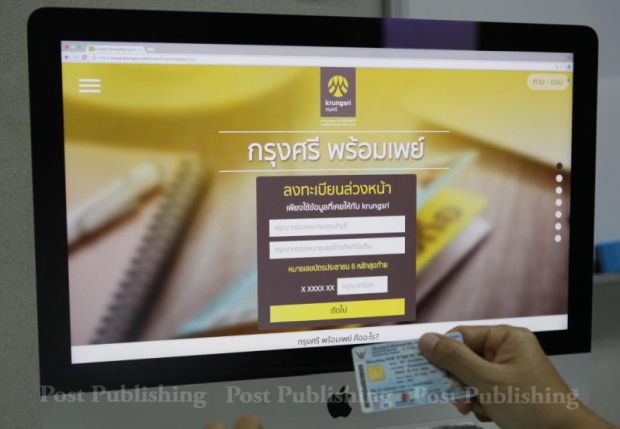 Online bank screen and ID card is a combination that will be used frequently to make payments or cash transfers.

Under PromptPay, people can transfer money online to recipients who hold accounts at different banks, or even the same banks in so-called "cross-clearing zones" free of charge.

Users are required to sign up to link their ID card or mobile phone number to accounts at participating banks.

The new national e-payment system is expected to heat up competition among banks and financial institutions.

The new system will lead to an overall higher number of bank accounts being linked with mobile phones or ID cards and increased use of e-payment instead of cash or credit card (a "network effect" see here). 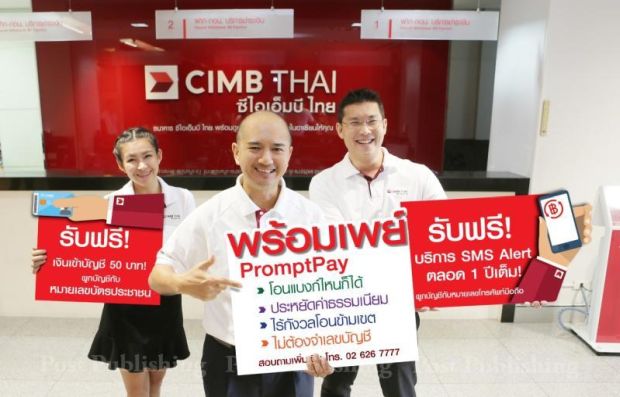 Banks are promoting the use of Promptpay in a big way.

To date 9.7 million people have signed up for PromptPay pre- registration, which runs until tomorrow (14/07/2016).

Around 8.1 million persons registered with ID cards, while the rest registered through mobile phone numbers.

Most of the 15 commercial banks and four state-owned banks have opened pre- registration for PromptPay. Official registration begins on July 15.

USED TO GIVE MONEY TO THE POOR

Low-income earners whose daily income is no more than 300 baht could be eligible to receive government welfare and subsidies to be paid through the national e-payment's electronic purse, according to Finance Minister Apisak Tantivorawong.

About 20 million people who earn less than 100,000 baht a year are estimated to qualify for the welfare scheme.

Recipients must be Thai nationals and be aged at least 18. Sign ups are being held at state-owned banks from July 15. 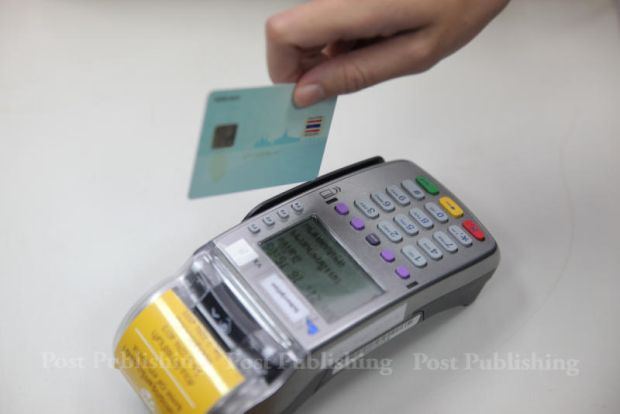 ID cards being run through scanners to make payments, not just credit cards will soon be a common sight.

The electronic purse will allow the poor who do not have bank accounts to receive government subsidies.

Senior citizens will also be able to receive the government's living allowance via the cards.

With the electronic purse, holders can touch the cards on readers to get free rides or pay fares at a half price for public buses and trains.

Some people may have mixed feelings about doing all their banking through a government controlled e-payment system.

The new computer crimes bill does not seem to have adequate privacy safeguards according to critics (see telecoms expert Don Sambandaraksa on these issues here). Several recent news stories indicate that government websites also seem to have little security and be easy to hack with personal information stolen or made public.

E-payment customers could be liable if their mobile phones are infected with malware, viruses or if the phone has been jailbreaked, a senior Bank of Thailand (BOT) official has declared.

"If carelessness is proved, then liability will fall on customers"

"Banks have a method to prove whether customers [are responsible for losses of e-money]," said Budsakorn Teerapunyachai, director of the risk management and information system examination department.

"Banks have a condition stating that customers should not jailbreak their mobile phones due to the risk of viruses, but if customers refuse to comply and [hackers] are able to steal their information and engage in [illicit] transactions, then banks are not responsible."

YOU MAY NOT KNOW YOUR PHONE HAS BEEN HACKED

You may not know whether your phone has been infected by malware or a virus, but there are precautions that you can take.

Browsing an online link sent from a friend via a chat app is a common way for computer viruses and malware to infect a mobile phone.

IF SOMETHING GOES WRONG, THERE MAY BE A LENGTHY INVESTIGATION

In cases where money is hacked via a digital channel such as mobile phones or internet banking, banks are not likely to take responsibility for the fraud.

Banks, however, conduct investigations on a case-by-case basis.

If it is proven that such fraud was the result of the banking system, that particular bank will have to shoulder responsibility.

If a consumer transfers e-money to a wrong bank account, then that person should notify the bank or the FCC right away.