Water hyacinths to be cleared from Chao Phraya (Updated)

An drone-taken image from today shows the huge job officials have ahead of them to clear more than 50,000 tons of water hyacinths from above the Chao Phraya dam in Chainat province. CHUDET SIHAWONG

Officials have been told to clear water hyacinths clogging rivers and waterways from the central plains to Bangkok to improve flows and prevent floods.

Our reporters now say that 50,000 tons of water hyacinths have collected above the Chao Phyra dam in Chainat within the past two weeks. 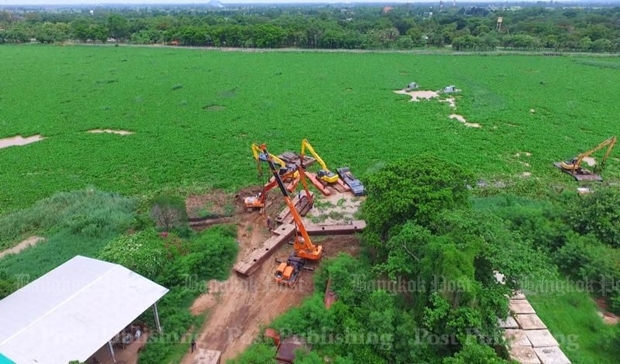 Some of the backhoes at work above the dam. CHUDET SIHAWONG

Provincial governor Kanit Iamrahong reports they now have 11 backhoes to collect the plants, up from three the day before. Five are working on floating pontoons. The target to complete the job has been reduced from one month to three weeks.

Officials have been told to clear water hyacinths clogging rivers and waterways from the central plains to Bangkok to improve flows and prevent floods.

He said the density of the plants would impact draining, particularly after heavy rain. It also blocks water transportation and fishing by villagers.

"Past experiences have shown that water hyacinths and garbage were the major obstacles to draining and caused floods in the central region and Bangkok," said Maj Gen Sansern. 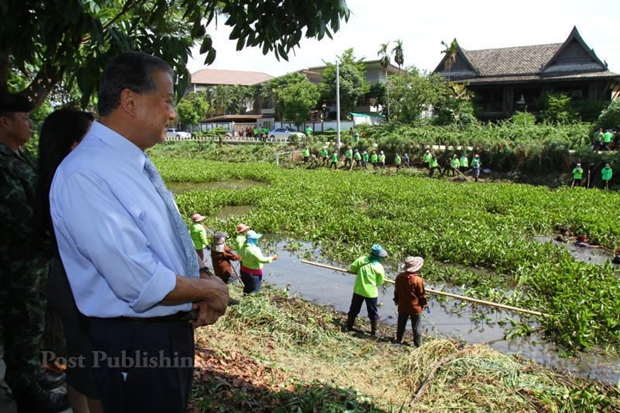 He said the Marine Department had coordinated with the Interior Ministry to deploy officials to clear the plants. It also outlined an action plan to send boats and officials from the department into the Chao Phraya River and branching rivers such as Noi River, Bang Ban and Bang Phra Kru canals in Ayutthaya and the Tha Chin River in Suphan Buri from now to Sept 28.

The premier also instructed related government agencies such as ministries of science and technology, interior and natural resources and environment to find sustainable solutions by applying technologies and innovation to eradicate the plants or to make more products such as animal feed.