"My job [at an undisclosed state enterprise] is nothing serious," a taxi driver once told his passenger, a Bangkok Post reporter.

"I punch in for work in the morning, then leave to drive my cab all day making extra money, and at four I rush back to the office to clock out."

"Everybody does it so no one tells on each other."

"The office may want us [to be at work] only when there is an emergency, like when something breaks down and needs an urgent repair," he explained.

This man's relaxed attitude to work exemplifies the cushy and comfortable life of many state enterprise workers that has existed for decades under the protection of their labour unions. 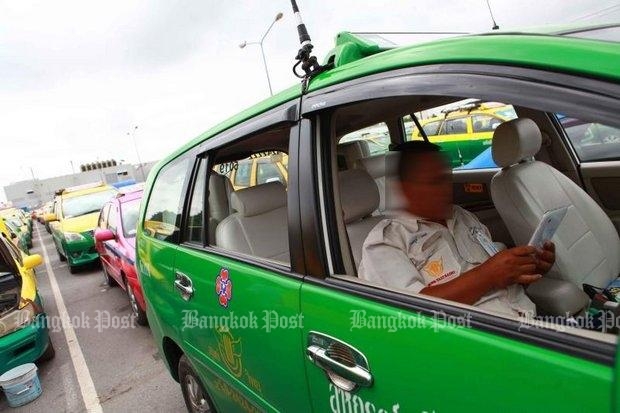 A taxi driver boasted to a rider he only shows up at his state enterprise job twice a day - to clock in, and clock out, and says "everyone does it". (File photo by Somchai Poomlard)

Such activity is set to end after the bill on state enterprise reforms sailed through the cabinet earlier this month before going to the National Legislative Assembly (NLA) later this year.

The the new law has been carefully drafted by the State Enterprises Policy Commission also known as the Superboard, formed by the National Council for Peace and Order (NCPO) to overhaul the structure of state enterprises.

The superboard comprises veterans in various fields invited by the NCPO.

The new law will put 12 corporatised (made into corporations) state enterprises under the ownership and supervision of a  holding company soon to be set up while allowing the State Enterprise Policy Office (Sepo) to continue supervising the other 45 state enterprises.

Chanvit Nakburee, director of State Enterprise Policy and Planning Bureau and spokesman of Sepo said the law is a crucial element to tackle key problems in the entire system of Thailand's state enterprises.

STATE ENTERPRISE REFORM IN THAILAND FOR THE FIRST TIME

"The bill is the first time ever that a [state enterprise] reform has been undertaken," said Mr Chanvit.

The bill was initiated by the superboard, which is chaired by Prime Minister Prayut Chan-o-cha, and aims primarily to prevent political interference, a key issue that needs to be tackled in order to ensure management transparency and enhance efficiency in state enterprises.

According to the superboard's internal research, the combined investment assets of all state enterprises have tripled to 75% of Thailand's GDP from a decade ago but the revenue generated from the assets have risen to only 44% of GDP from 26%.

He said the state enterprise has a total of 22,000 employees but has been operating at a loss of tens of billions of baht for several consecutive years while revenue at its business rival Advance Info Services (AIS), which has 10,000 employees, is more than five times that of TOT.

TOT labour union had repeatedly accused the superboard that its reform plan had sought to privatise the state telecom enterprise.

The union claimed this would lead to staff being laid off, despite government assurances the reform plan had nothing to do with a privatisation.

However, the union has just agreed, eventually and with conditions attached, to the government's idea to merge some parts of the huge state telecom enterprises TOT and CAT Telecom.

State enterprises have long been influenced by politicians who have appointed aides and other proxies to boards or top executive positions.

Politician influence is the key reason for the corruption and poor performance of these enterprises, according to experts.

The new law will prevent politicians from exploiting state enterprises for pork-barrel projects as in the past, and raise efficiency to boost revenue and scale down burdensome budgets.

Among the 12 corporatised state enterprises, wholly owned by the Finance Ministry, to be transferred to the holding company are PTT, Krungthai Bank, TOT, CAT Telecom, MCOT, Thai Airways International, Airports of Thailand and the State Railway of Thailand (SRT).

One of the most crucial points to prevent political interference is the selection process of the board of directors in each state enterprise as well as the senior management.

The bill will allow all stakeholders as well as the public to participate in the selection process.

This is to secure good corporate governance of the state enterprises in the long run.

Mr Chanvit said the single law would help the state enterprises to manage and supervise their different missions and management structures under a common blueprint.

The bill has given the key management power to the superboard, allowing it to be a master plan drafter and thus able to see the whole picture to create a policy to address state enterprises' problems without resorting to redundancy.

"The plan will set the direction for each state enterprise to go towards and that will give them a key performance index," said Mr Chanvit.

"It has set a five-year performance target for each enterprise and goes into detail how much investment budget they require and what they can do to achieve their target."

If necessary, there are tools for them to adjust their plans, he added.

Each enterprise will have a crucial preliminary audit programme before implementing their operational plans. This can help limit the risk of mission failure and damages.

The reform plan may still have some way to go but many are hopeful that it will not be too long before the country sees transparency in its state enterprises' operations.