People leave buildings in the Asoke area after shakes from the Myanmar earthquake. (@Suriya476 @JS100 photo)

Earthquake shook buildings in Yangon & across Myanmar and the region as far as Chiang Mai & Bangkok in Thailand.

At least one man was killed in Magway region when a building collapsed during the earthquake. A woman was also injured.

A local official reported heavy damage to several temples in Bagan -- Myanmar's most famous archaeological site and a major tourist destination some 30 kilometres north of the quake's epicentre.

"About 60 pagodas in Bagan were damaged. Some were seriously damaged," said Aung Kyaw, the director of Bagan's culture department.

A tourist police officer from Bagan confirmed the damage and said a Spanish tourist was slightly hurt when the quake knocked her from the temple where she was watching the sunset.

Scaling Bagan's ancient Buddhist monuments to watch the sun set over the city's 2,500 temples is a daily ritual among tourists and local pilgrims who flock to the site.

The temples, built between the 10th and 14th centuries, are revered in the Buddhist-majority country.

Soe Win, a local MP from Chauk -- a riverside town close to the epicentre -- said it was the worst earthquake he had experienced in years.

"More than eight pagodas in the town collapsed," he told AFP, referring to Chauk. "Two buildings collapsed as well, while some others were cracked. People in the town are still scared."

Earthquakes are relatively common in Myanmar, although the country has not suffered a major one since 2012.

That powerful tremor -- also of 6.8 magnitude -- struck the centre of the country, killing 26 people and injuring hundreds.

On Wednesday, an earthquake of 6.8 magnitude struck central Myanmar according to the U.S. Geological Survey (USGS).

The earthquake shook buildings in Yangon and across Myanmar and in the region as far away as Chiang Mai and Bangkok in Thailand, witnesses reported.

After the earthquake shook office buildings and highrises in the Sukhumvit Road area of downtown Bangkok for a couple of seconds, residents evacuated the buildings.

"My office is shaking," an office worker on the 22nd floor of Silom Complex said at 5.42pm.

"All my work colleagues stood up," said the office worker.

The jolts were felt in highrises in other parts of the capital including Ratchadaphisek, Khlong Tan and Khlong Toey areas.

The epicenter of the quake was 143 kilometers west of the city of Meiktila in central Burma at a depth of 84 kilometers.

No immediate reports of casualties or damage were made.

The quake shook buildings in Myanmar's biggest city of Yangon and in other towns and cities, witnesses said.

The earthquake was also felt to the west of Myanmar in Bangladesh.

There was a 5.3 earthquake in the Burma-India border area on August 22, two days ago (see here).

A major earthquake fault line, the Sagaing Fault, runs through  central Myanmar passing through the central Myanmar cities of Mandalay, Yamethin, Pyinmana, the capital Naypyidaw, Toungoo and Pegu before dropping off into the Gulf of Martaban, over 1200 kilometers away. 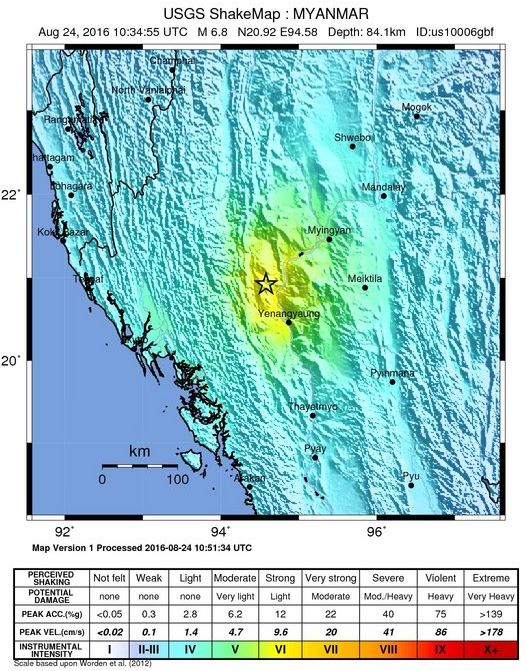 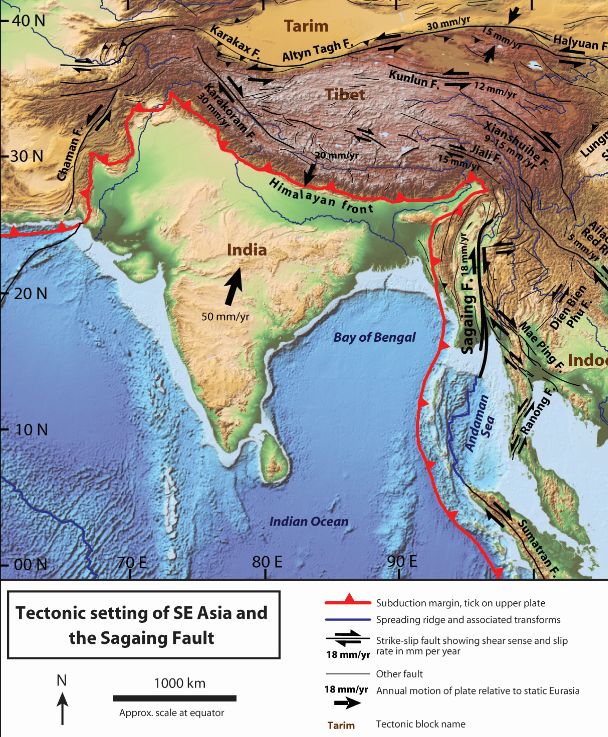