Squishy soft robots can wiggle or squeeze into difficult places, do surgery, biopsies or just take a look around & see what is happening.

More recently, in movies like Ex Machina (2015) or Automata (2014) robots are starting to look and behave more like humans, with soft skin and voices tinged with emotion.

Now, in the latest robot development, some robots are getting extremely soft, squishy even.

WHAT IS A SOFT ROBOT?

Soft robots are built from soft and flexible parts or components so that they can move in restricted spaces.

WHY WOULD YOU NEED A SOFT ROBOT? 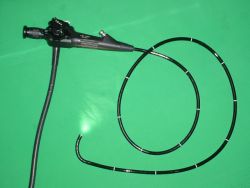 A flexible endoscope used to view what is happening inside the body & doing surgery without cutting body open (non-invasive surgery) (Source: Wikipedia)

We've all seen endoscopes, the long fiber optic probes that surgeons insert into narrow spaces in the body such as the esophagus to see what is happening in our bodies.

Soft endoscopes with octopus-like tentacles might well be the next frontier in endoscopes.

Most robots are rigid and have trouble going anywhere but the factory floor where they assemble things.

HOW DOES IT WORK?

The first-ever octopus robot has no rigid parts and is made completely from silicone gels with different degrees of softness or stiffness.

The octopus legs are powered by chemicals, not mechanically powered, set in motion by pushing gas through chambers in the legs.

To be more exact, hydrogen peroxide washes over tiny pieces of platinum which results in a chemical reaction that produces a gas.

The gas flows through the chambers in the octopus tentacles or arms, inflating and moving them.

The moving tentacles propel or move the octopus through the water (for more details read here & here).


NO WIRES OR BATTERIES

The octopus robot is completely self-contained and autonomous without external controller or power source, without the wires, cables or batteries that one would normally expect in a device.

At Harvard University's Wyss Institute for Bioinspired Engineering, the body of the tiny 10 centimeter "octobot" is first made in a mould (read the technical paper here).

The fuel store is 3D-printed onto the body with the network of tiny pipes and valves and inflatable bladders which set the tentacles in motion, all of which is used to control the octobot.

The octobot does not have an electrical circuit board but rather a board made of tiny pipes that   sequences of tentacle movements are pre- programmed into.

As the BBC describes it, "at its heart is a 'fluidic logic circuit' where valves act as logic gates, allowing gas to flow and inflate compartments inside the eight separate limbs. The gas is pumped into that circuit by a little fuel cell filled with hydrogen peroxide, which reacts with particles of platinum left in the system by the printing process" (see here).

OCTOBOT IS NOT REALLY AN OCTOPUS

The strange thing is that the octopus itself really does not move or get power in this way.

Engineers have only used the octopus to create something that is entirely new, a new kind of robot that has no hard skeleton and is capable of a huge variety of different movements.

Probably most importantly, soft robots interact better with humans, with their soft skin and fragile bodies, and thus have great potential for future applications.