From fried insects to raw buffalo meat salad to pigs brain baked in banana leaves, down home country cooking in Thailand can be fascinating and delicious too, but also, apparently, deadly sometimes.

Two children also became ill after eating a chicken that was cooked with it.

Public health officials of Thung Chang district, where the strange deaths occured, went to a house in Pradu village on Monday morning to collect the remainder of the toad meat for examination after hearing of the deaths.

GRILLED A TOAD FOUND IN THE RAIN

Yod Siangkong, an assistant village headman, said a 70-year-old man had grilled a big toad he caught in the rain last night.

After the toad was done, he invited another man of the same age and a 45-year-old neighbour to join him in enjoying the snack and drinking liquor together.

About an hour later, the man who found and cooked the toad developed breathing problems, vomited, fell unconscious and died shortly afterward.

The other elderly man developed the same symptoms.

He was rushed to Thung Chang Hospital where he was pronounced dead.

The 45-year-old, who said he ate only a small piece of the toad meat and some of its eggs with the liquor, vomited and suffered from a stomach ache throughout the night.

Two children, aged 4 and 5, also fell sick after eating chicken which was cooked on the same grill as the toad.

It was believed the chicken was contaminated with poison from the toad's glands. They were all admitted to Thung Chang Hospital.

The moral of the story is, perhaps, do not mistake a toad for a frog when you go out hunting for food in the rain or you might not live very long.

The same goes for poisonous mushrooms which it is easy to mistake for the edible variety. 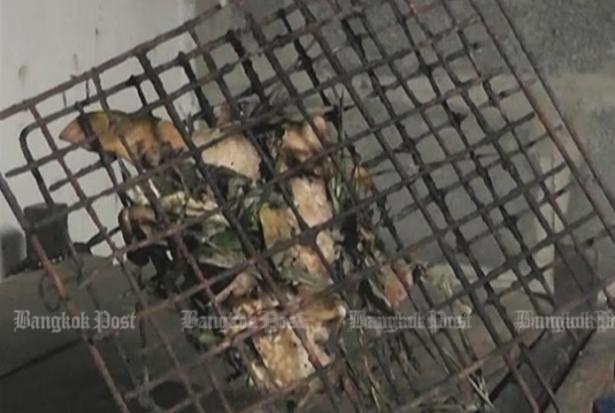 Grilled toad like this one from Kalasin in November 2013 is inedible. The animals have poisonous glands which normally protect them from predators, and the toxin is not destroyed by cooking. (Bangkok Post file photo)

Dr Nipon Pattanakijruang, chief of the Nan public health office, said two poisons - bufotenine and bufotoxin - are usually found in glands under the skin of a toad, and in its eggs, intestines and blood.

These poisons cannot be neutralised by heat.

People who eat toad meat or their eggs and become sick should be made to vomit and rushed to the hospital as soon as possible, he said.

The poisons normally protect the toads from predators, which learn to leave them alone.

Grilled frog, a different animal but often of similar appearance, is a common snack in parts of Thailand.