Bangkok's Sathon and adjacent districts are under close watch for possible Zika virus transmission after 21 people were diagnosed with the disease in Sathon. (Photo by Pattanapong Hirunard)

Note: According to the World Health Organization, for most Zika victims, the symptoms are mild and require no special treatment. The symptoms include mild fever, skin rash, conjunctivitis, muscle and joint pain, malaise or headache. These symptoms normally last for 2-7 days.

The big danger, of course, is for pregnant women, because the virus can cause birth defects in their offspring, particularly microcephaly, a where a baby is born with a small head or the head stops growing after birth

The woman had a high temperature, rashes, joint pain and red eyes. She contracted the virus in the 37th week of her pregnancy but has since given birth and both the mother and her newborn are safe.

A survey found many mosquito-breeding areas within a 100-metre radius of the family's residence. Health surveillance of infected people will remain active in the area for the next 30 days and in districts adjacent to Sathon. 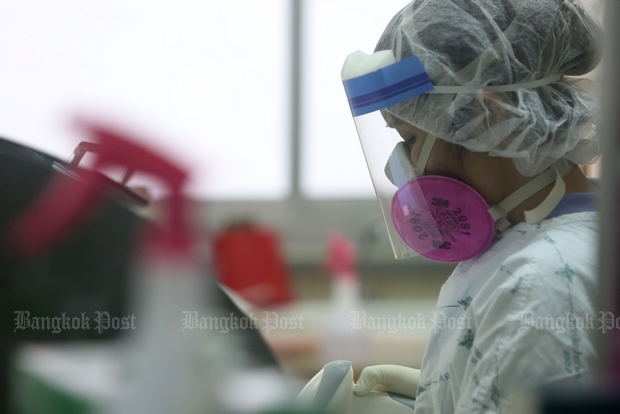 Lab equipment has been developed for fast and accurate detection of Zika — a mosquito-borne virus suspected of causing birth defects — at the Bamrasnaradura Infectious Diseases Institute. (Post File Photo)

The Public Health Ministry reported earlier that there had been five Zika patients a year on average in the country from 2012 to 2015. Zika is of particular concern because it has been linked to birth defects, with cases of microcephaly widespread in Central and South America.

About 20 other cases of the mosquito-borne virus have been reported recently in Bung Kan, Chanthaburi, Chiang Mai and Phetchabun provinces but control operations have proved effective, authorities said.