Family and mosque members plant the headstone and smooth the dirt over a grave of one of the victims from Sunday's tragedy. CHANAT KATANYU

20 dead, 12 still missing. Authorities say they have stressed safety to boat drivers, but many boat drivers ignore these safety regulations and most passengers do not pay sufficient attention either.

If you follow the news, you know that tragedies like the boat sinking in Ayuthaya have a pattern. At first, there is a rush to find out what happened, where, why, and of course, how many were killed and injured.

When things calm down a bit, it is often found that safety regulations were not closely followed and often the regulations themselves are lacking. Then, of course, there is the sad task of burying the dead. That is where we are today.

The death toll as of this morning is 20, with about 50 injured and 12 still missing, many of whom are likely dead.

With today's update, you have a complete picture of what happened from start to finish. Save it. There will be similar stories in the future.

Marine Department authorities have stressed to boat drivers in the past the importance of strictly following safety precautions, and paying attention to maximum loads and speed, he said.

However, many boat drivers simply ignore these safety regulations, and most passengers do not pay sufficient attention to the practice of boat-travel safety, Mr Nat said.

The department does not have a enough of staff to be deployed to ensure boat transport safety in all areas, he said.

Department director-general Sorasak Saensombat said the department is considering issuing a new regulation to require passenger boats with 25 seats or more to instal the Automatic Identification System so that boat drivers' behaviour can be fully monitored. 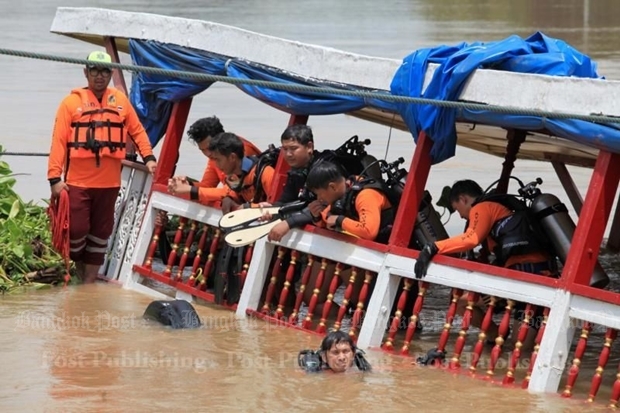 Divers are still at the accident site, but there is also a big search downstream as the bodies of many of the victims have likely floated with the current. CHANAT KATANYU

This new regulation will apply to passenger boats operating on the Chao Phraya River and Gulf of Thailand routes, he said.

The compulsory insurance policy of the boat's owner had expired on March 10 and had not been renewed, said Suthiphon Thaveechaiyagarn, secretary-general of the Office of Insurance Commission.

Prime Minister Prayut Chan-o-cha has instructed the Interior Ministry to consider providing financial assistance to the families of the victims as permitted under the ministry's regulations, said government spokesman Sansern Kaewkamnerd.

Gen Prayut also told authorities to suspend the operations of the company that owns the boat until it can prove whether Sunday's incident was an accident or caused by negligence, said Maj Gen Sansern.

The prime minister expressed his condolences to the families who lost loved ones.

The National Council for Peace and Order, meanwhile, ordered all agencies concerned to step up measures to prevent boat transport accidents. 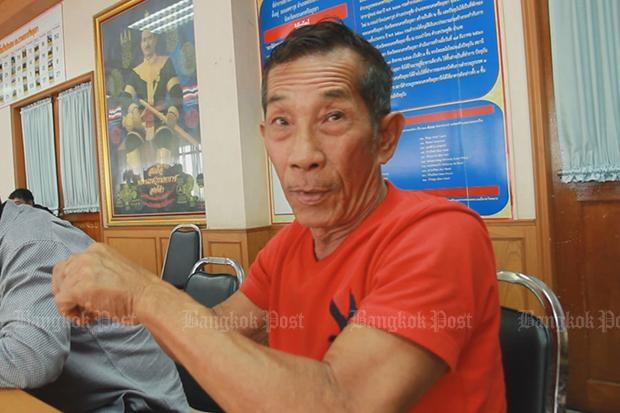 20:25  Thai PBS reported on its evening news programme that the death toll is now 20. One interesting note about the helmsman is that he was operating on an expired license. Experts interviewed on the program agreed that currents in that area of the Chao Phraya are very strong at this time of year and trying to overtake a very long sand barge is risky. Video has emerged of the boat before the accident and it appeared to be travelling at high speed.

Here is an early evening update from our online reporters

AYUTTHAYA – The confirmed death toll from the river ferry boat that crashed and sank on Sunday now stands at 17, the provincial governor said on Monday afternoon, after earlier reports had put it at 18.

Pol Col Napol Kladkhemphet, deputy commander of Ayutthaya police, also said the 67-year-old boat helmsman, Virat Chaisirikul, had been detained for questioning and then charged with recklessly driving the boat and causing deaths.

He  was  also charged with carrying more passengers than the boat was permitted to carry. It was licensed for 50 passengers, but there were around 150 on board. His boat driving licence had also expired.

He was being held pending further questioning and denied police bail at this point.

Mr Virat denied he had been careless. He was overtaking a sand barge on his right at a curve in the river and a wave hit his boat's tail, knocking it off course and causing it to hit the embankment at Wat Sanam Chai.

He also said he had been unable to prevent the passengers boarding the boat.

"The number of passengers was just overwhelming, I was unable to stop them," he said.

Pol Col Napol said the vessel's owner, Sunthorn Phansuethong, had contacted the police and he would be questioned later.

He would also be charged with carelessness causing death.

Twelve of the victims were women and girls, three men and two boys, aged four and eight years.

Ayutthaya governor Prayoon Rattanasenee said about 10 people were still missing. Of the 46 people treated for injuries, four of them were still in hospital.

A burial ceremony is planned for 15 of the deceased at the Muslim in Ayutthaya, where they were members of the mosque. It is about two kilometres from the place where the ferry hit a concrete pillar on the embankment and sank in the Chao Phraya River in front of Wat Sanam Chai.

JS 100 Traffic radio reports officials have just found the body of a 9-year-old boy, bringing the total number killed so far to 16.

AYUTTHAYA – At least 15 people are dead and 10 are missing after a boat on a Muslim religious trip collided with a concrete flood barrier in Phra Nakhon Si Ayutthaya district on Sunday afternoon.

Deputy Ayutthaya governor Rewat Prasong said Chao Phraya River currents in front of Wat Sanam Chai, the scene of the accident, are usually strong. The tourist boat tried to avoid another boat on the river, causing it to veer away and hit an embankment at the temple.

Alarmed, more than 100 passengers suddenly stood up, causing the boat to list, take on water and sink, Mr Rewat said.

The search for survivors and bodies resumed at first light Monday.

Ayutthaya governor Prayoon Rattanasenee said that as of early Monday, the official death toll was 15. Another 46 people were injured, of whom 10 were in critical condition.

The search for 10 people still missing from the crash was under way. 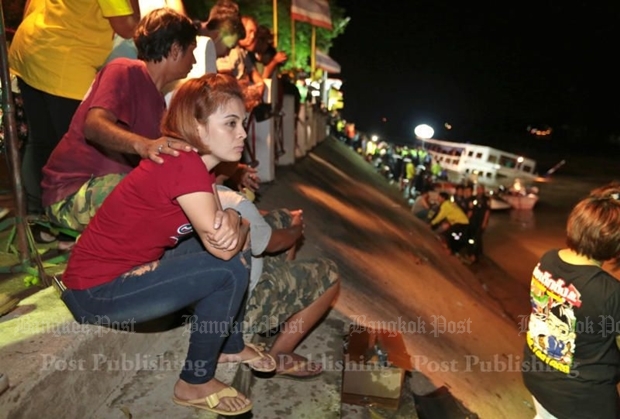 The known victims included six women, six men, and a boy, he said. Details of the other two victims were not known.

Mr Rewat said it was believed more than 150 passengers were on board when the collision occurred at 3.15pm.

Sombat Mongkolchai Tabtim, the two-level tourist boat, was 27 metres long and, according to Marine Department authorities, was registered in 1967 to carry a maximum passenger load of 50.

After more than 12 hours of search operations, 15 people were confirmed drowned.

Marine Department director-general Sorasak Saensombat said authorities believed some passengers were trapped, stuck in the lower level of the boat. 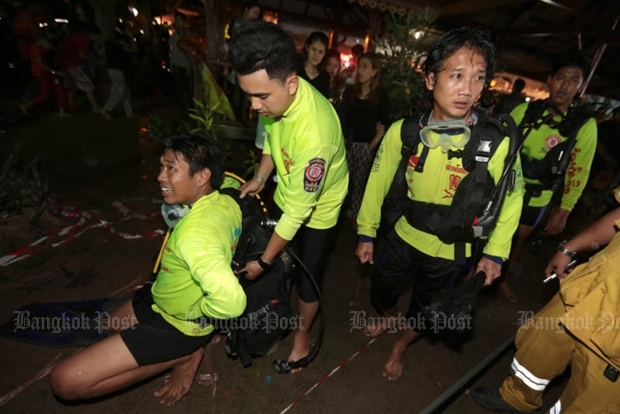 A group of Thai Muslims from Talat Kwan community in Nonthaburi was on board the boat on the Chao Phraya River to attend an annual religious ceremony at a local mosque in Ayutthaya before the ferry hit the barrier during their journey back.

At 4.10pm, Kris Thianmitraphap, secretary to the Ayutthaya mayor, ordered rescue boats and fire boats to rescue passengers who were on board the stricken boat.

The Marine Department brought a large ship to bring the sunken tourist boat back to the surface.

The lower level of the boat was about two metres below the river surface; the upper level was partially protruding, Mr Rewat said.

Mr Sorasak also said the strong river currents were partially to blame for the incident. The steerman was unable to control the boat, causing it to hit the embankment.

He said safety equipment on the boat may not have been sufficient for the passengers.

The steerman, identified as Wirat Chaisirikul, 68, is still missing, he added. 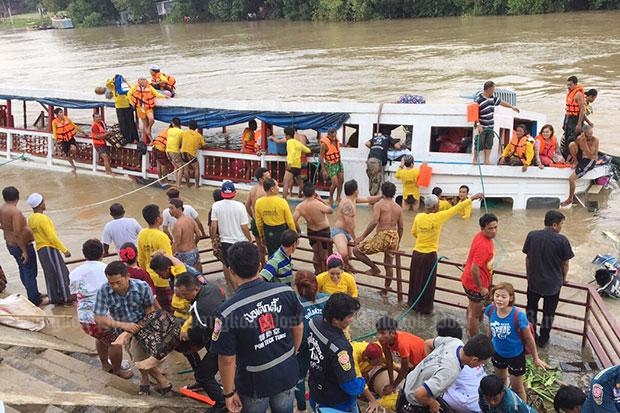 19:25: The traffic radio website JS 100 says the death toll has reached 13 and the boat steerman has fled the scene.

19:00: Thai PBS just reported that the death toll is now eight with many injured. The boat apparently had a capacity of 50 and it is likely that the number of passengers exceeded that. Some reports say as many as 150 were on board..

AYUTTHAYA – At least seven people including a child are dead and almost a dozen are missing after a boat on a Muslim religious trip collided with the foundation pillar of a bridge in Phra Nakhon Si Ayutthaya district on Sunday.

The accident occurred at 4pm as a large two-deck boat carrying more than 100 passengers was travelling along the Chao Phraya River. It hit a bridge pillar near Wat Sanam Chai in tambon Ban Pom, causing the boat to capsize, Ayutthaya disaster responders said.

The casualties and the number of missing people may rise as rescue workers are still trying to identify the number on board and those rescued.

The boat was taking passengers from Nonthaburi to an annual Islamic religious rite in Phra Nakhon Si Ayutthaya district. The crash took place as they were returning to Nonthaburi.