The large media presence was blamed for the BMA's failure to catch any monitor lizards yesterday morning, but in quieter circumstances in the afternoon, officials managed to catch and remove 40 of the animals. (Video included)

Around 40 Asian water monitor lizards were captured yesterday in Lumpini Park in an attempt by City Hall to reduce the lizard population in the park.

The lizards are set to be removed from the park this morning and will be released in the Khaoson Wildlife Breeding Centre in nearby Ratchaburi's Chom Bung district. 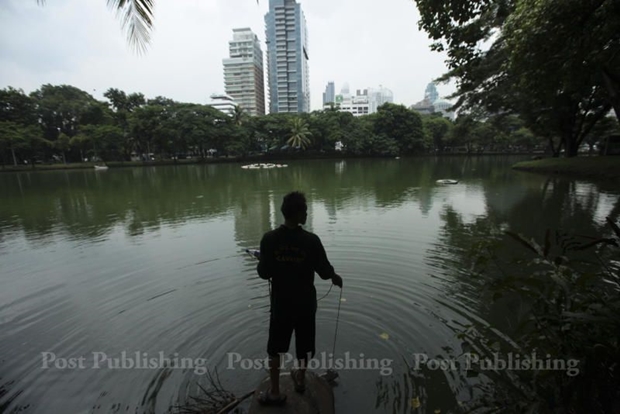 BMA officials came up empty (they caught no lizards) in the morning, blaming the rain and large media contingent. They did meet their target of 40 in the afternoon, however. Another operation is planned for October.

The Bangkok Metropolitan Administration's (BMA) Department of Environment Director Suwanna Jungrungrueng said yesterday her department has received complaints about the increasing lizard population in the park.

According to the director, some people became frightened by the reptiles when they came face to face with them in the park. Bicycle riders complained that the lizards would sometimes pop up from swampy ground and walk along lanes, causing accidents. 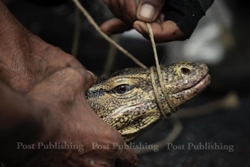 Mouth tied shut, this monitor lizard is ready for removal.

Although the presence of the lizards indicates the park's fertility, she said, they sometimes damage flower beds and their increasing population could affect the ecology of the park.

There are an estimated 400 Asian water monitor lizards, between one and three metres long, living in the Lumpini Park.

She said the BMA had sought help from wildlife officials at the Department of National Parks, Wildlife and Plant Conservation to observe the removal of the reptiles.

Asian water monitor lizards are a protected species, she said, adding it is illegal to catch or remove endangered animals without permission from the authorities.

Ms Suwanna insisted the removal is being carried out in a manner that meets proper standards.

You can see how to catch a monitor lizard here. It's not that difficult, actually.

Nipon Boonyapattharo, vice president of We Love Lumpini Park Foundation and a former Nakhon Si Thammarat governor, said he did not agree with the move to catch and relocate the lizards.

He said he has been cycling in the park for over 10 years and has never seen anyone being harmed by the lizards.

The BMA should use its time more efficiently on other missions instead of wasting time on this, he added. 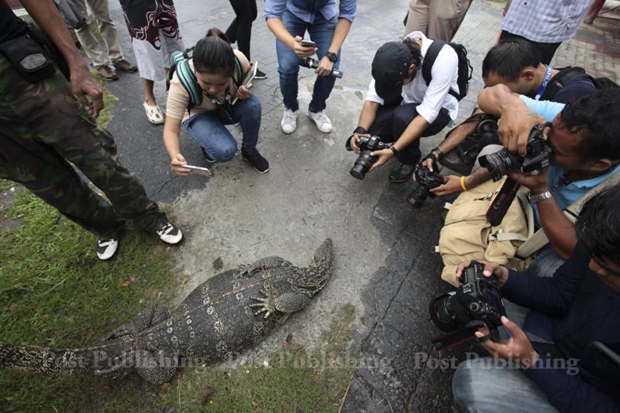 BMA officials failed to catch any lizards yesterday morning as they said too many local and international media members were gathered. They managed to meet their target of 40 lizards later in the afternoon after moving on to quieter areas.