Health officials on Wednesday inspect the production process for eclairs at the Makro outlet in Nan’s Muang district, to find the cause of the food poisoning. (Photos by Rarinthorn Petcharoen).

The number of people hospitalised after after eating eclairs at branches of a big retail store in Nan township rose to 38 on Wednesday as health inspectors began a full inquiry.

NAN – The number of people hospitalised after after eating eclairs at branches of a big retail store in Nan township rose to 38 on Wednesday as health inspectors began a full inquiry.

Dr Pongthep Wongwatcharapaiboon, deputy director of Nan Hospital, and a team of health officials inspected the production process for the eclairs at the Makro outlet in Muang district to find the cause of the food poisoning.

Most patients bought the dessert from the same retail store in this northern province, Dr Pongthep said. Many suffered acute diarrhea, dizziness and vomiting, said the doctor. 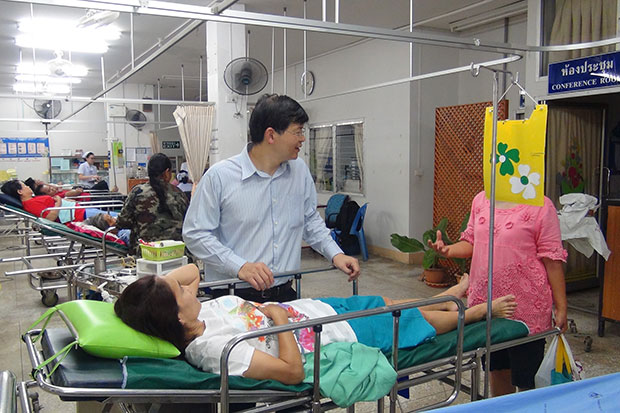 A doctor talks to a relative of one of the 38 people being treated at Nan hospitals after eating contaminated eclairs from the Makro outlet in downtown Nan.

The hospital believed there might be some irregularities in the ingredients and production process, he said. If the dessert was contaminated with bacteria, consumers would develop symptoms in six hours to two days.

But most patients quickly fell ill after eating, suggesting that there might be some chemicals in the ingredients, said the hospital’s deputy director.

Sakolkrit Sukhawattanakul, manager of the store’s outlets in the North, said a thorough examination would be made of the production process to find out the exact cause of the food poisoning.

Production and sale of the eclairs would cease until the matter is  cleared up .

He would visit the patients and take responsibility for the incident.