New wave of Chinese coming to live in Thailand

New Chinatowns in Bangkok surprise the passerby with a sea of signs in Chinese and many Chinese restaurants, some serving local cuisine from Yunnan.

New wave of Chinese migrants moving to Thailand to retire, study, make money or as waypoint for further adventures are making their mark on Bangkok.

New wave of Chinese coming to live in Thailand

A fourth wave of migrants is coming into Thailand to retire, study, make money or as a waypoint for further adventures
18/09/2016
Paritta Wangkiat, Spectrum

Many new Chinatowns have been forming across Bangkok in recent years, including Huai Khwang where the Chinese Embassy is located.

New Chinatowns have become a favourite point of gossip and discussion among Bangkok people.

Some critics say they are taking business opportunities away from Thais and living in isolated clusters, while others argue that the new wave of Chinese migrants is bringing both business initiative and opportunity to Thailand. 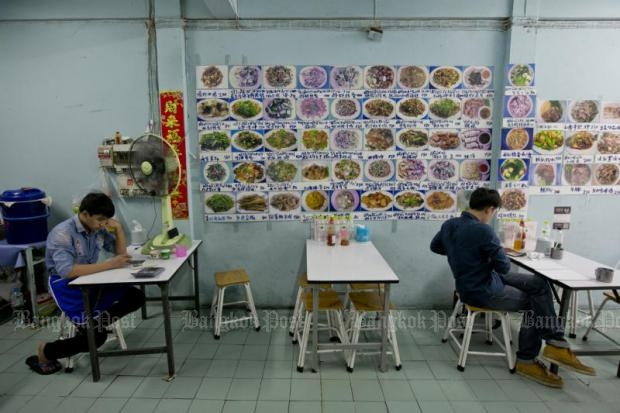 Chinese restaurants with exotic Chinese dishes with only Chinese language descriptions are common sight in the new Chinatowns of Bangkok.

It's estimated that Southeast Asia as a whole now has over two million "new" Chinese migrants.

The new Chinese migrants are different from previous generations. Their place of origin is more diverse, they have higher education levels and women make up a greater percentage of the migrant population. They migrate for various reasons including job opportunities, study and investment.

This wave of Chinese moving to Thailand left China seeking "economic opportunity" rather than mere "economic survival" as previous generations had, according to Sakkarin Niyomsilpa, a researcher at Mahidol University's Institute for Population and Social Research, he wrote in his study "The Fourth Wave: Southeast Asia and New Chinese Migrants."

The Department of Employment reported that 18,812 Chinese obtained work permits last year, almost double the figure of 9,618 Chinese in 2011. The Immigration Department puts the total number of Chinese nationals residing in Thailand last year at 91,272, however, academic studies have put the figure as high as 350,000-400,000 in the past decade.

As the expatriate Chinese community grows, real estate investment is also on the rise as Chinese look for second homes in Thailand. The Suttangrak Group is developing housing projects worth five billion baht to sell as time-shares to Chinese buyers. Thailand as a base for business in Southeast Asia is becoming more common. Also, Thailand as a place to stay and work as a second home is also more common. 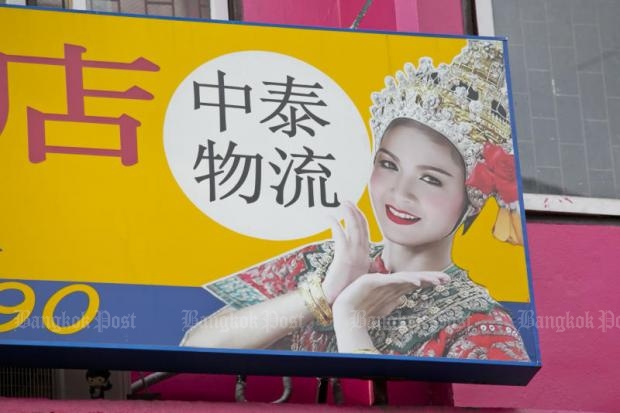 Chinese signs are a common sight in Bangkok's new Chinatowns.

HOW TO DEAL WITH THE NEW MIGRANT INFLUX?

Thai policymakers have to adjust their thinking, says Yos Santasombat from Chiang Mai University's department of sociology and anthropology.

"No one can stop the influx of new Chinese migrants," he said at the Thailand Research Expo last month.

"We will have to create an atmosphere that makes Chinese migrants feel like they are a part of, but not assimilated into the countries where they reside."

"It's important for Thailand to better understand the process, outcome and impact of the flow of migrants so we can adapt skilfully and peacefully to the influx." 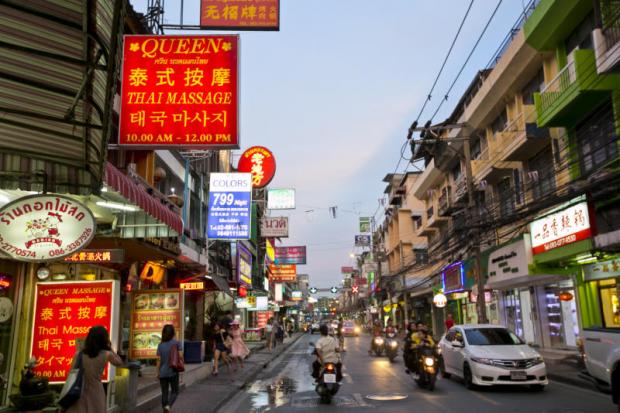 AND WHAT ABOUT THE NON-CHINESE WAVE OF WESTERN MIGRANTS?

And of course, what about all the migrants from western countries such as the EU, US and Australia who have chosen to invest and work in Thailand just as Chinese have done?

Should they be given equal treatment despite their non-Asian race?

Westerners who are skilled computer and engineering professionals might even be important for Thailand's future economic advancement as a previous article argues (see here).

But now back to main subject of this article, Chinese migrants. 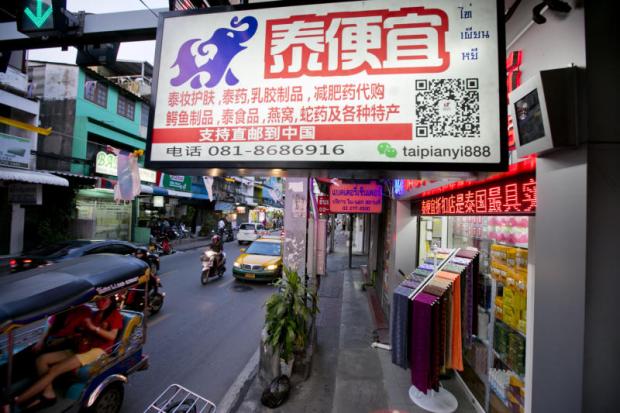 A survey by the Institute of Asian Studies' Asian Research Centre for Migration at Chulalongkorn University found many new Chinese migrants bring significant funds to invest in start-ups in Bangkok.

The survey of 119 Chinese migrants living in Huai Khwang for over a year found that 68.9% had a bachelor's degree. For 97.5% it was the first time they had migrated outside China.

About 74.8% came for employment such as white collar jobs, Chinese-language teachers and tour guides, while 21% came for study and 4.2% to accompany their family. Some intend to return to China once they have made their fortune or succeeded in their endeavours.

Lack of job opportunities may have something to do with the recent wave of immigrants. The unemployment rate in China has hovered around 4% for the last five years. But other reports say the jobless rate has tripled to 12.9% from 2012.

Many choose Thailand for its affordable cost of living, friendly people and low competition, according to the Asian Research Centre for Migration study.

As far as the growth of Chinese business in Huai Khwang is concerned, in shipping and logistics, there were 30 Chinese operators, while there were 14 restaurants and 18-20 beauty product shops. Some pass themselves off as a Chinese-Thai joint venture but local officials suspected some businesses are 100% Chinese owned and operated. 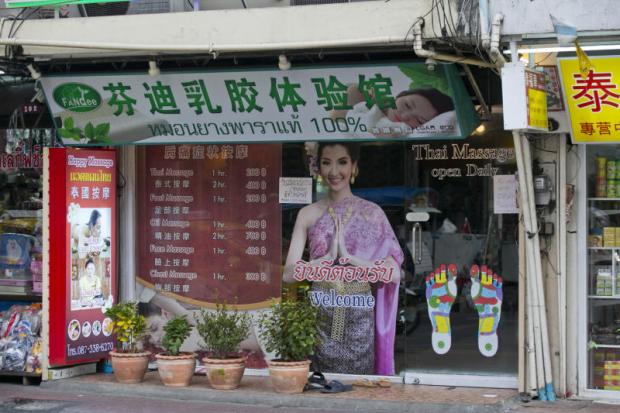 BIOGRAPHY: WILL NEVER GO BACK TO CHINA

Despite China's booming economy, many younger Chinese have found they can't reap the benefits and head overseas.

Aaron Li, 28, is one of those. His father is a wealthy businessman in southwestern Yunnan province which borders Myanmar, Laos and Vietnam. Mr Li was sent to study in Bangkok 10 years ago against his will. Earning very low scores in China's national examination shut him out of Chinese universities and the opportunity to study business.

But at Bangkok's Assumption University, he has become a good student. He learned three languages -- Thai, Japanese and English -- and expanded his business connections.

He's managed to set up a company with a Thai partner to export rubber, silk and other commodities back to China. He's also invested in condominium units, which he says he wouldn't have been able to afford back home.

Mr Li says Thailand has given him an opportunity to be outstanding. "I won't go back to China. I don't like the system of doing business there. But I won't live in Thailand for the rest of my life. If I find opportunity somewhere else, I will  move on."

According to Mr Li, there is too much red tape doing business in China, which involves getting state permission. Launching businesses in Thailand is easier because of the "looser system" and the openness to foreign investors. 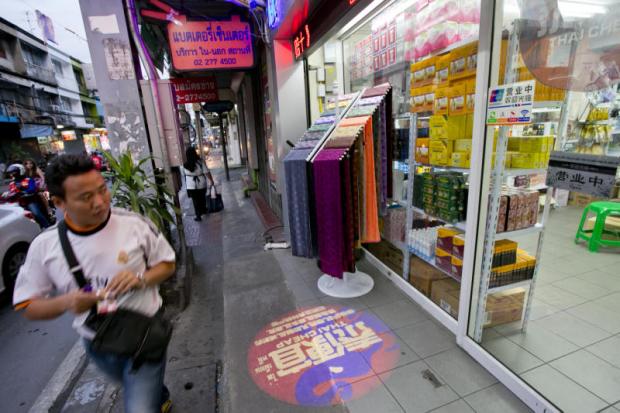 BIOGRAPHY: COMING FOR SCHOOL IN THAILAND

Many younger new Chinese migrants move to Thailand to gain an education and then continue their explorations and wanderings in other countries.

There will likely be more young Chinese migrants pouring in soon, including those who were born in the 2000s.

Shanghai-born Dhu Xiu, 22, a fourth-year communications student majoring in advertising, is one of the younger generation hoping to transit through Thailand to a better life in another country.

She plans to apply for a scholarship to study for a master's degree in Australia, and perhaps get a job there. "I was not a top student in China," she said. "Scholarships there are only for the really top students. Here it is much easier and it's cheap."

Office of the Higher Education Commission statistics show the number of Chinese students in Thai tertiary institutions has grown from 4,618 in 2011 to 6,157 in 2015.

Over the same period, the number of Thai students has dropped as a result of the low birth rate. Thai private universities have also begun to sign agreements with Chinese institutions to bring in students. Rajabhat universities, which are easier to gain admission to than public universities, are among the targets for Chinese students. 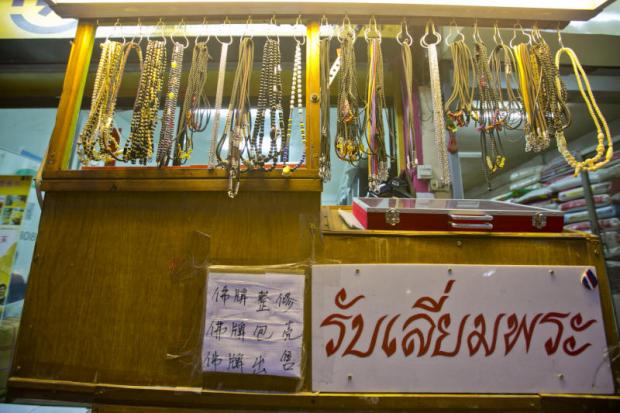