Kim Kardashian, tied up and robbed at gunpoint in Paris, flees to New York

Reality star Kim Kardashian jetted home to the United States on Monday to be comforted by husband Kanye West, after being tied up at gunpoint in Paris and robbed of jewelry worth $10 million.

In the reality TV world, no one is bigger than Kim Kardashian. Her comings and goings are reported in the tabloids every day. After the unsettling event in Paris, she is certain to get even more coverage. Notice that even a news agency like AFP couldn't resist describing how she and others in the story were dressed.

New York, Oct 3, 2016, AFP – Reality star Kim Kardashian jetted home to the United States on Monday to be comforted by husband Kanye West, after being tied up at gunpoint in Paris and robbed of jewellery worth $10 million.

The multimillionaire mother of two and wife of the American rap superstar, was holed up at a luxury apartment in New York's swish Tribeca neighbourhood "badly shaken but physically unharmed" after the assault.

Kardashian and her husband stepped out of the back seat of a car after a convoy bristling with bodyguards pulled up to the apartment block, as seen in a video posted on celebrity news website TMZ.


Kardashian kept her head down and ignored questions from reporters about how she was doing, her long hair hiding her face. She wore baggy eggplant-colored pants, towering black stilettos and a plunging black top.

West kept to his usual street cool of jogging bottoms, green anorak and a grey hoodie as he walked behind his wife into the building, where a five-bedroom penthouse was recently on the market for $24.5 million.

Kardashian matriarch Kris Jenner also went to the apartment building, an AFP photographer said, dressed in black and also ignoring questions from reporters about her and her daughter's state of mind. 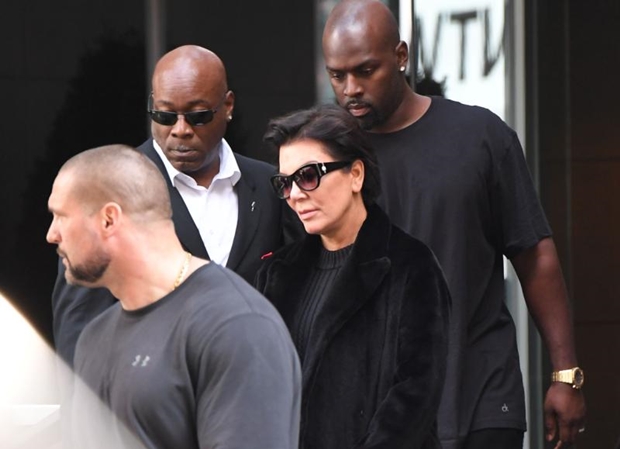 Her daughter – a California-based TV and social media star who earned $51 million last year according to Forbes – has yet to speak out publicly about the assault.

French police said the 35-year-old was "tied up and locked in the bathroom" of a residence in the chic Madeleine district of Paris, near the city's main department stores. The crime occurred at 2:30 am (0030 GMT) on Monday. 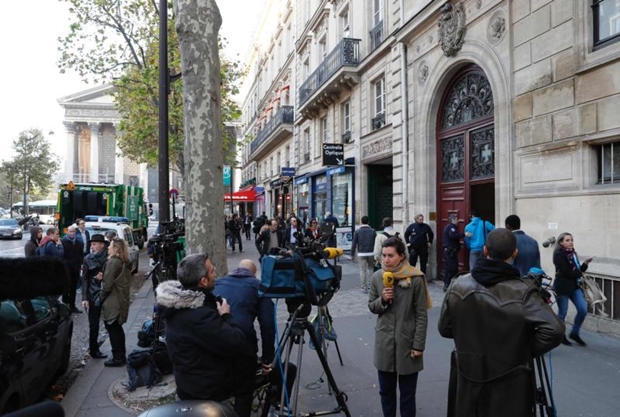 Journalists work as police officers stand guard at the entrance to a hotel residence at the Rue Tronchet, near Madeleine, central Paris, on October 3, 2016, where US reality television star Kim Kardashian was robbed at gunpoint by assailants disguised as police who made off with millions, mainly in jewellery./ AFP PHOTO / Thomas SAMSON

A police source said the robbers made off with a ring worth around four million euros ($4.5 million) and a case of jewellery with a value of five million euros ($5.6 million). Two mobile phones were also taken.

Police said five men were involved and two of them entered Kardashian's bedroom in the luxury residence where she has stayed before.

The robbers zip-tied Kardashian's hands with plastic handcuffs, duct-taped her mouth and ankles, dumping her in the bathtub, TMZ reported. The star later told police that she feared she was about to be raped, the website said.

The robbers allegedly kept saying "ring, ring" and Kardashian told them where to find a new ring she got from her husband – a photograph of which she posted to social media last Friday – TMZ added.

Another member of the gang restrained the building's security guard during the robbery, but he was unhurt, police said.

Investigators say the assailants may have fled on bicycles.

Kardashian flew out of France on a private jet after being questioned by police about the robbery. She had been in the French capital attending Paris Fashion Week.