Thailand's beloved King has passed away

All royal family members were in attendance

There were tears in the crowd of well-wisers even before the official announcement of His Majesty the King's passing. WISIT THAMNGERN

Thailand's beloved King has passed away

His Majesty passed away peacefully at Chalermphrakiet Building at Siriraj Hospital in Bangkok it was announced in a national broadcast.

All royal family members were in attendance at the time.

The ninth King of the Chakri Dynasty ascended to the throne on June 9, 1946 and was the world's longest-reigning monarch. People across the country celebrated the 70th year of his accession to the throne this year. 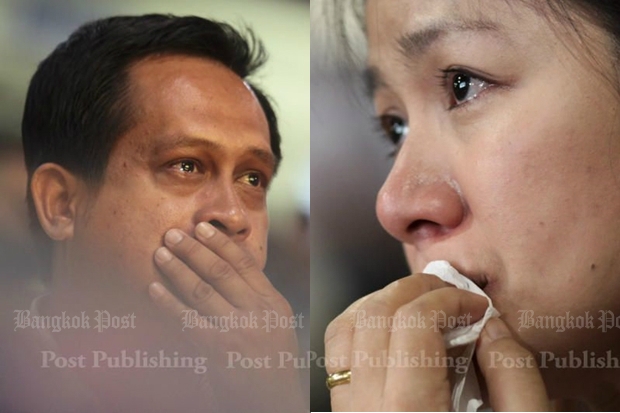 No matter how hard they try, people can not hold back their tears.WISIT THAMNGERN

Well-wishers in pink and yellow had been flocking to the hospital to pray for him since the RHB announced on Sunday night that the King's condition was "unstable".

The bureau said in another statement on Monday that His Majesty's general condition was still not stabilised and royal doctors were giving him medication.

An even larger crowd began gathering at Siriraj Hospital on Tuesday, and rapidly grew over the next two days.

The crowd gave alms to monks and prayed continuously for the King's good health. Government offices throughout the nation opened their doors for similar activities on Thursday, and people in all provinces began streaming in to pray and sign their names and best wishes for His Majesty's recovery.

The government has set a mourning period of one year for the passing of His Majesty King Bhumibol Adulyadej.

People are urged to join the mourning as appropriate.

In a Prime Minister's Office announcement released shortly after the Royal Household statement on Thursday evening, all public offices and educational institutes will fly flags at for 30 days from Oct 14, 2016. 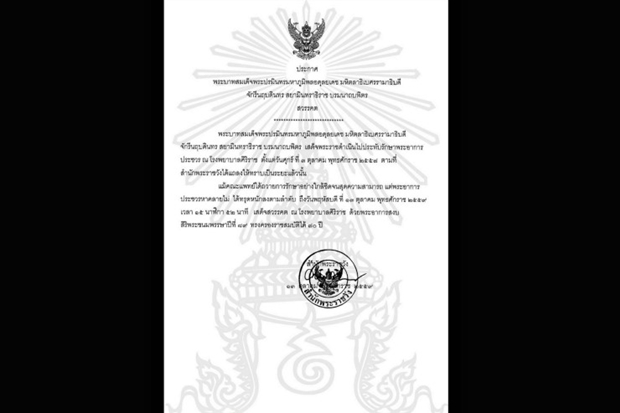 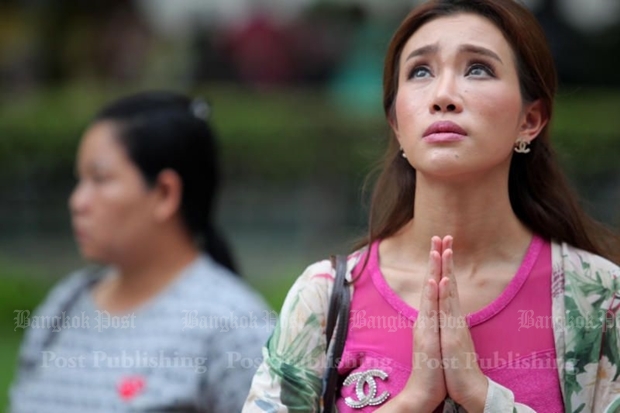 A woman prays for His Majesty the King's recovery outside Siriraj Hospital where he is receiving treatment. WICHIAN CHAROENKIATPAKUL 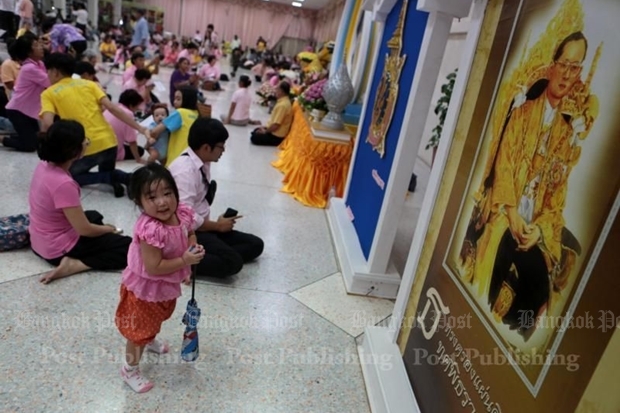 Well-wishers are crowding into the 100-Year Siriraj Pavilion at Siriraj Hospital. CHANAT KATANYU

The crowd of well-wishers praying for His Majesty the King continued to swell outside Siriraj Hospital as his loving subjects also gathered at government offices nationwide for prayers on Thursday.

Concerned about reports on His Majesty the King's health, a steady stream of people was arriving at Siriraj Hospital, many from outlying provinces. Well-wishers gave alms to Buddhist monks at the hospital in the morning, making merit for the King.

Their prayers for the good health of His Majesty continued to be the main activity throughout the day.

In Bangkok people wrote their names and best wishes for the King's recovery in books at the Sahathai Samakom Pavilion in the Grand Palace.

Government organisations were holding gatherings for their officials to pray for His Majesty's health.

With most people clearly unable to travel to Bangkok, interior permanent secretary Grisada Boonrach  ordered the proper arrangement of places at provincial halls, district offices and local administrative organisation offices nationwide for people to sign books sending their  best wishes to His Majesty the King and praying for his good health. 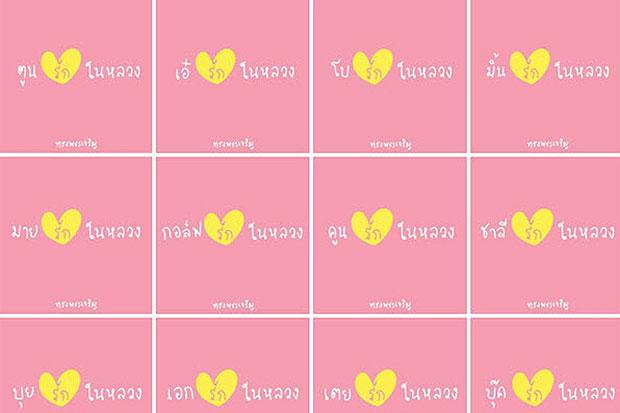 The most popular avatar is everywhere on Thai social media, expressing love for His Majesty the King. (Photo from Kultida Kul Facebook account)

Large numbers of Thai social media users have changed their account profile image and banner to pink with the same message of love for His Majesty the King.

The pink avatar with the main message reading "Love the King"  and a small message saying "Long Live the King" now dominate Thai accounts on Twitter and Instagram.

The highest profile figure to make the change is Princess Ubolratana. Her avatar now says "Nicha Love the King", on her @nichax IG account.

A Facebook user named Kulthida Kul reportedly designed this popular avatar and put it in her Facebook album, allowing people to use it for free. Its use has gone viral on social media.

She put up the same avatar with hundreds of nicknames already attached. People can also copy it and change the name for free.

"Feel free to use it," she wrote on her Facebook account. "No permission is needed for sharing this album."

On Facebook, former prime ministers Abhisit Vejjajiva, Yingluck Shinawatra and her brother Thaksin have also changed the banner of their Facebook accounts to pink with the "Long Live the King" message.

Yellow is the colour for His Majesty because he was born on a Monday. Pink has been associated with the King for many years, ever since royal astrologers said it was a good colour for him and helped keep him well.

King 'not stabilised' as Royal Family gathers at Siriraj

The general condition of His Majesty the King has not been stablised and royal doctors are prescribing medication to treat his symptoms, the Royal Household Bureau said on Wednesday night, as members of the Royal Family and well-wishers gathered at Siriraj Hospital.

In the 38th statement, the bureau said that on Tuesday, His Majesty's blood pressure dropped while his pulse and the levels of acid in the blood increased.

The results of a blood test showed inflammation and abnormal functioning of the liver, so royal doctors prescribed antibiotics to treat the inflammation and took steps to reduce acidity in the blood.

According to the statement, His Majesty's general condition is not stable and royal doctors continue to closely monitor his condition.

Later Princess Ubolratana arrived at the hospital, followed by HRH the Crown Prince who had just returned from abroad, and HRH Princess Maha Chakri Sirindhorn. 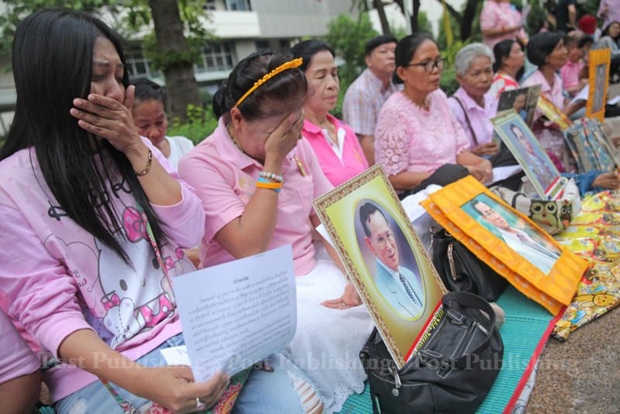 There were large crowds of worried well-wishers outside the hospital Wednesday afternoon. WICHIAN CHAROENKIATPAKUL 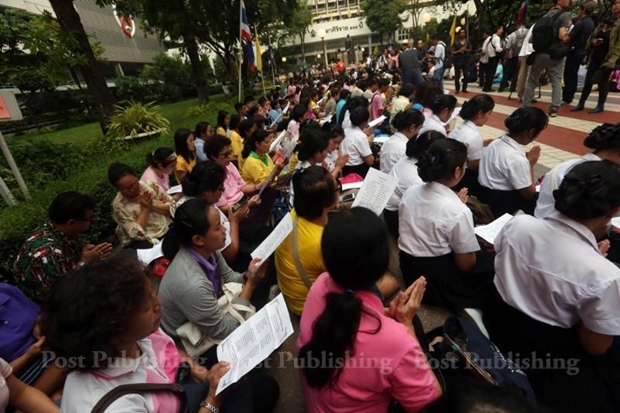 The crowds chanting prayers were even larger in the evening, with many saying they would stay all night. WEERAWONG WONGPREEDEE

The compound of the nation's first hospital was full with well-wishers who were praying for the good health of His Majesty the King who will turn 89 this December.

"His Majesty the King is the heart of Thailand," said 42-year-old teacher Donnapha Kladbupha. "I know everyone will wish him a speedy recovery, but I want to see his smile after his recovery too."

Suwanna Kenamthiangwan, 62, was trying to get as close as possible to His Majesty the King's building together with some 20 friends. All wore pink, the colour believed to help promote His Majesty's health.

"I will stop praying for him only when he gets better," she said, holding His Majesty the King's portrait to her chest.