HRH Crown Prince Maha Vajiralongkorn, seen last night at the prayer ceremony for his late father, King Bhumibol Adulyadej. The prince has asked for time before ascending to the throne. (POST TODAY photo)

HRH Crown Prince Maha Vajiralongkorn has said he would like to take some time to grieve before accepting the invitation to become the new king. Privy Council president Prem Tinsulanonda has therefore been named Regent pro tempore. 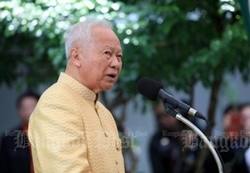 Gen Prem's appointment is in line with the constitution, which states that the council president is acting regent when the throne is vacant, according to Section 24.

"Pending the proclamation of the name of the Heir or the Successor to the Throne under Article 23, the President of the Privy Council shall be Regent pro tempore," the constitution says.

The duty of the Regent pro tempore ends when a meeting of the National Legislative Assembly (NLA) invites the heir to ascend the throne, according to Section 23.

The NLA vice-president said the NLA meeting on Thursday evening was held under Section 2 of the interim constitution which the cabinet should have submitted the heir name for acknowledgment. Then the NLA chairman would invite the heir to step on the throne.

However, Prime Minister Prayut Chan-o-cha informed the NLA on Thursday that the heir, HRH Crown Prince Maha Vajiralongkorn, would like to take some time to grieve with the nation before accepting the invitation to become the new king.

Therefore, a regent pro tempore is needed during this transition period. Mr Peerasak said the Privy Council president would automatically take that position.

Deputy Prime Minister Wissanu Krea-ngam also confirmed on Friday night that the Privy Council president has been named the regent.

Gen Prem was prime minister for eight years from 1980.

Prime Minister Prayut Chan-o-cha said he had been granted an audience with the Crown Prince, who told him he would like to take some time to grieve with the nation before accepting the invitation to become the new king.

"His Royal Highness would like to wait for an appropriate time," Gen Prayut said.

At 9pm on Thursday, the National Legislative Assembly acknowledged the passing of His Majesty King Bhumibol Adulyadej and its president will invite His Royal Highness Crown Prince Maha Vajiralongkorn to ascend the throne by law and tradition shortly.

The Royal Household Bureau statement on the king's passing was read out at the NLA and its members held a moment of silence for nine minutes. Constitutionally, the next step is for NLA president to invite HRH Crown Prince Maha Vajiralongkorn to become the new king. 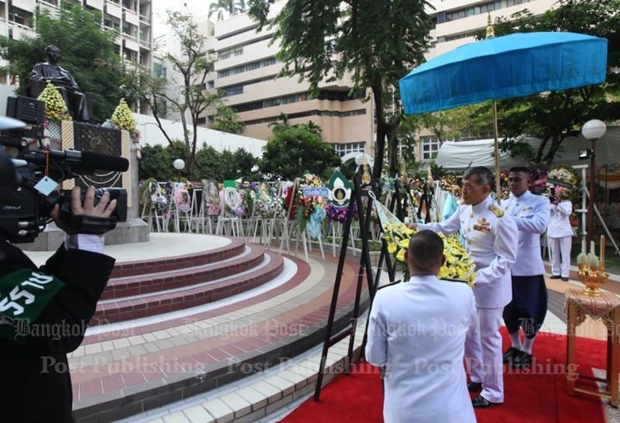 His Royal Highness Crown Prince Maha Vajiralongkorn presided over a ceremony on September 23 at the statue of Prince Mahidol of Songkla, the father of His Majesty the King, at Siriraj Hospital to mark Mahidol Day. THITI WANNAMONTHA

According to Section 23 of the 2007 constitution, when the throne becomes vacant and the king has already appointed his Heir under the 1924 Palace Law on Succession, the cabinet shall notify the Parliament president, who will convene members for acknowledgement.

The parliament president will then invite the Heir to ascend the throne and proclaim him King, according to the provision.

Since there is no Senate or House of Representatives at the moment, the 250-member National Legislative Assembly will act as parliament. 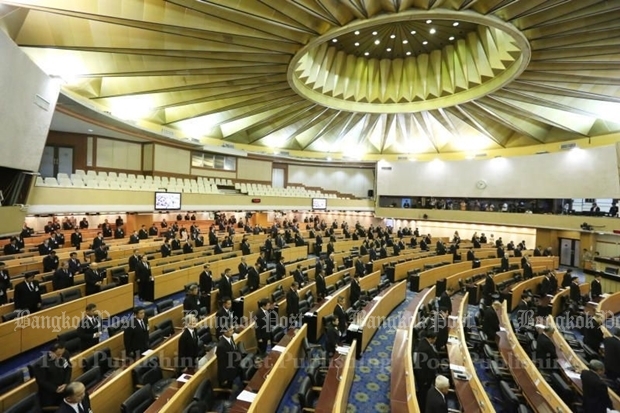 All National Legislative Assembly members remained silent for nine minutes during a meeting on Thursday night which acknowledged the passing of His Majesty King Bhumibol Adulyadej. KITJA APICHONROJAREK

Although the 2007 charter was scrapped by the 2014 coup, the 2014 interim charter uses its chapter on the King as a reference.

As tension mounted throughout Thursday, Prime Minister Prayut Chan-o-cha cancelled a weekend trip to Goa in India for a regional summit.

The prime minister also withdrew from a dinner marking Police Day in the evening. The event was subsequently cancelled.