His Majesty's music: 'Music is in all of us' | Bangkok Post: learning 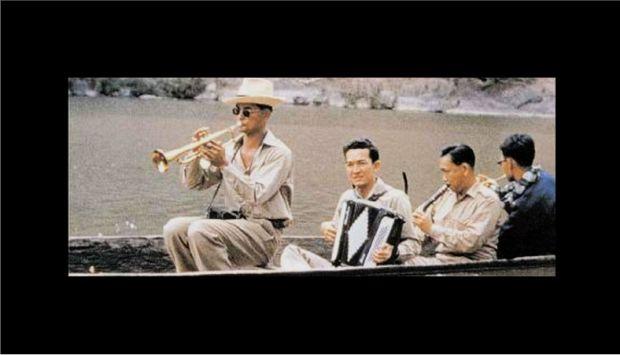 His Majesty created much joy with musical compositions, performances & broadcasts throughout his long reign.

MUSIC & HIS MAJESTY THE KING

His Majesty's music: 'Music is in all of us'

His Majesty King Bhumibol Adulyadej created much joy among Thais of all ages with his musical performances, broadcasts and compositions, which lasted throughout his long reign.

His Majesty's lifelong love of music began at an early age. He showed a natural aptitude for music from early childhood and in his early teens he took up music with his elder brother King Rama VIII, while both were studying in Lausanne, Switzerland. The brothers enjoyed playing music together, forming a trio with their music teacher. His Majesty's first musical instrument was a second-hand saxophone, and although he studied classical music on piano for several years, he showed an affinity for wind instruments, especially saxophones, trumpet and clarinet.

After studying music and learning musical notation, His Majesty turned his attention to the records he liked to listen to, mainly traditional Dixieland jazz and swing band music played by jazz masters like clarinettist Sydney Bechet and saxophonist Johnny Hodges, as well as swing from Benny Goodman.

To further develop and hone his musical skills, he practised by playing along to the records. But he was more ambitious than just jamming to records, and by 18 he was ready to start composing songs himself; his first effort would be a 12-bar blues.

Candlelight Blues (Saeng Tien in Thai), which was composed in April 1946, was the first song His Majesty composed but was not the first released to the public; Love At Sundown (Yam Yen) written during the same period and still popular today, came out first, performed on the Public Relations Department's radio station by the Suntharaporn Band.

His Majesty reportedly delayed the release of Candlelight Blues because he felt it needed further polishing. Both were well received by the public but it was the next song,

Falling Rain (Saifon), a delicate, sweet waltz, that caught people's imagination. It remains one of the most popular royal tunes to this day.

Classical guitarist Hucky Eichelmann recorded two albums of His Majesty's music -- Candlelight Blues (1999) and Sweet Words (2007) -- both of which were hugely popular across the Kingdom.

"I found that His Majesty's songs were sweet and charming in character," he said. "And they fitted perfectly with the sound of the classical guitar," Eichelmann said.

Eichelmann offered some insight into why Falling Rain (Saifon) has become one of the most popular songs composed by His Majesty.

He noted that the use of tremolo in the song created the feeling of listening to rainfall and was a challenge for the guitarist to get it right.

"The tremolo technique is perhaps one of the best ways to create that feeling of rain falling, especially when played at that medium tempo, which is very difficult to play compared to fast tremolo."

Upon his return from his studies in Europe in 1951, His Majesty invited relatives and friends to play at his then residence, Ambara Villa.

He formed a band, which was named Wong Lai Kram (The Vintage Band). A year later, the Public Relations Department gave His Majesty a radio transmitter and the band began regular live performances every Friday night; when His Majesty moved to Chitralada, the radio station, known as Aw Saw, moved there, too, where it remains to this day. 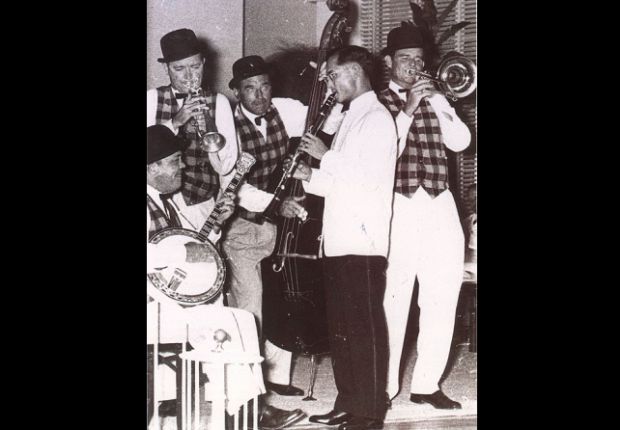 In white dinner jacket at a 1960 party given in his honour by the governor of Hawaii, the King joins a derby-hatted Dixieland jazz band in Honolulu. BKP

The King of Thailand's musical prowess and his willingness to play with visiting musicians was noted and word spread overseas that Thailand had a monarch who enjoyed playing music.

On a state tour to the US in 1960, His Majesty entertained guests at a dinner in Hawaii by playing clarinet along with local band, Kenny Alford And His Dixie Cats, to great applause.

In New York he played with some of the early "mentors" he heard on records like Benny Goodman, Jack Teagarden (trombone), Lionel Hampton (vibraphone) and Stan Getz (saxophone). 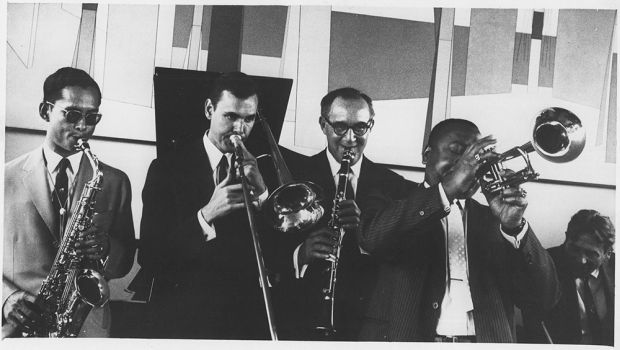 The King of Thailand joins in a jam session with Urbie Green, the famous clarinetist Benny Goodman, Jonah-Jones and Gene Krupa during his visit to the US 1960.

Many great musicians have played for His Majesty in Bangkok.

As a keen traditional jazz fan, His Majesty often invited the Preservation Hall Jazz Band, a legendary jazz ensemble from the birthplace of jazz, New Orleans, to perform in Bangkok.

Veteran clarinettist Charlie Gabriel said on a trip a few years ago that he was always delighted to perform for His Majesty because he said the King really appreciated the music the band played. 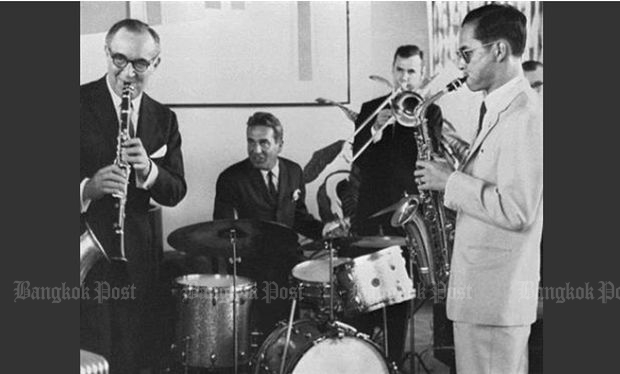 MUSIC IS IN ALL OF US

Over the years, many of His Majesty's songs and tunes have been performed by orchestras and musical ensembles on Broadway, in Europe and Japan.

But perhaps his greatest legacy is the musical dialogue he kept with his subjects over his long reign. Music was one of His Majesty's great passions and he viewed it as an important part of life.

As he wisely noted, "Music is an integral part of me, be it jazz or other kinds. Indeed, music is in all of us and forms a vital part of every man's life."

Click "play" to listen to His Majesty's music: 'Music is in all of us' and "Download" to keep this file for educational purpose.

adj (noun): connected with soldiers or the armed forces - ในทางทหาร,เกี่ยวกับทหาร

affinity (noun): a close relationship between two people or things that have similar qualities, structures or features - ความใกล้ชิด

album : a music recording of many songs sold as CD, DVD or MP3 - ชุดแผ่นเสียง, แผ่นเสียง, จานเสียง

ambitious : difficult and needing a lot of effort to succeed - ความทะเยอทยาน

applause : showing enjoyment or approval of something such as a performance or speech by clapping the hands repeatedly to make a noise - การปรบมือแสดงความชื่นชม

appreciate : to be grateful for something, i.e., feeling you want to thank someone for something they have done for you - สำนึกในบุญคุณ

aptitude : natural ability that makes it easy for you to do something well - ความฉลาดในการเรียนรู้, ความสามารถในการเรียนรู้ได้เร็ว

attention : interest, especially interest that the public has in a person, event, situation etc - ความสนใจ

birthplace (noun): the house or area where a person was born - สถานที่เกิด, บ้านเกิด

broadcast : a programme that can be seen or heard on television or radio - แพร่ภาพกระจายเสียง

celebration : a party or special event at which you celebrate something such as a birthday, a festival or a religious holiday - การฉลอง

challenge : something that needs a lot of skill, energy, and determination to deal with or achieve - สิ่งที่ท้าทาย, การท้าทาย

composition : a piece of music or art, or a poem - การแต่งเพลง, การประพันธ์

delighted : very happy or satisfied about something - ยินดีมาก,สุขใจ

dialogue : formal discussion between two groups or countries, especially when they are trying to solve a problem, end a disagreement, etc - การสนทนา

dream (noun): a series of images, events and feelings that happen in your mind while you are asleep - ความฝัน

ensemble (noun): a group of musicians who perform together - กลุ่มของนักดนตรี

entertain : to interest and amuse somebody in order to please them - ทำให้เพลิดเพลิน, ทำให้สนุกสนาน

hone : to improve a skill or talent that is already well developed -

imagination : the ability to form pictures in the mind - จินตนาการ

invite : to ask somebody formally to go somewhere or do something - เชิญ

jazz (noun): a style of music that developed in the US among African Americans with a strong beat and lots of free playing or "improvisation" - แจ๊ส, ดนตรีแจ็ส

last : to continue to exist - สืบต่อไป

legacy : something that someone has achieved that continues to exists after they stop working or die - สิ่งที่สืบทอด

lifelong (adj): lasting or existing all through your life ตลอดชีวิต - ตลอดชีวิต

master : a man who is very good at something - ปรมาจารย์

mentor : an experienced person who helps someone who has less experience, especially in their job - ผู้ให้คำปรึกษา

musician (noun): a person who plays a musical instrument or writes music, especially as a job - นักดนตรี

natural : existing in nature; not made or caused by humans - เป็นธรรมชาติ, ตามธรรมชาติ

note : to notice or pay careful attention to something - สังเกต

overseas : in another country - ต่างประเทศ

patriotic (adj): having or expressing a great love of your country - ด้วยความรักชาติ

perfectly : done in a way that is complete and without faults or weaknesses - สมบูรณ์แบบ

perform : to put on a show for people, e.g., singing, playing a sport, etc - แสดง

performance : the act of carrying out some type of entertainment or sport - การแสดง

polish (verb): to make changes to something in order to clean it up or improve it - ขัดเกลา, ฟื้นฟู, ปรับปรุง

practise : to do something regularly, often according to a custom, religion or set of rules, or as a habit - ทำตามหลักทางศาสนา

public relations (PR) : the activity of creating a good opinion among people about a person, product, company, or institution - งานประชาสัมพันธ์

record : make a copy of something such as music or writing - บันทึก

regular (adj): normal; following a pattern, especially with the same time and space in between each thing and the next - ปกติ, เป็นประจำ, เสมอๆ

reign (noun): a period of time during when a king or queen rules a country - ช่วงเวลาครองราชย์

relative : a member of your family - ญาติพี่น้อง

saxophone : a metal musical instrument that you blow into, used especially in jazz - แซ็กโซโฟน, เครื่องดนตรีประเภทเป่า

second-hand (adjective): not new; owned by somebody else before - ใช้แล้ว, มือสอง

skill : the ability to do something well, usually as a result of experience and training - ฝีมือ, ทักษะ

technique : a method of doing something using a special skill that you have developed - เทคนิค, กลวิธี (เฉพาะด้าน)

tempo : the speed at which something happens - จังหวะ

traditional (adj): of a custom, a way of life or a way of doing things that has not changed for a long time - เป็นประเพณี, ตามธรรมเนียม, ตามที่ปฏิบัติกันมา

tune : a series of musical notes that are sung or played in a particular order to form a piece of music - ทำนองเพลง

vital : extremely important; necessary for the success or continued existence of something - จำเป็นสำหรับชีวิต; สำคัญมาก