After serving Bangkok as governor for eight years, MR Sukhumband pledges to continue working for the people as he has done in the past.

MR Sukhumbhand Paribatra on Wednesday bade farewell to the people of Bangkok after being removed from the office of city governor and replaced by Pol Gen Aswin Kwanmuang.

Prime Minister Prayut Chan-o-cha, chairman of the National Council for Peace and Order (NCPO), invoked Section 44 of the interim charter to remove MR Sukhumbhand. The order was published in the Royal Gazette on Tuesday.

MR Sukhumbhand posted his farewell message on his Facebook page on Wednesday.

He congratulated Pol Gen Aswin and offered his moral support.

The former Bangkok governor, who was elected twice to run the Bangkok Metropolitan Administration (BMA), thanked all BMA administrators and employees for their support during his nearly eight years in office.

"Most important of all, I would like to thank the people of Bangkok for electing me to work as Bangkok governor for two terms.  At times of flood and political crises, all of you  cooperated fully with the BMA.  I will remember your kindness throughout my life.

WILL CONTINUE TO WORK FOR THE PEOPLE

"I would like to bid farewell to you all who gave me the mandate to run the city administration for the past eight years, but I will not abandon my intentions to do good things for the Thai people, including Bangkokians," he wrote.

MR Sukhumbhand said he had worked in the interests of the majority, both in the public sector and private sector.

His works included about 16 years teaching at Chulalongkorn University, 12 years as a member of the House of Representatives and nearly eight years as Bangkok governor.

During the past 30 years he had awarded nearly 2,000 scholarships to students at university level.

"I will remain committed to working for the public, without change," MR Sukhumbhand wrote. 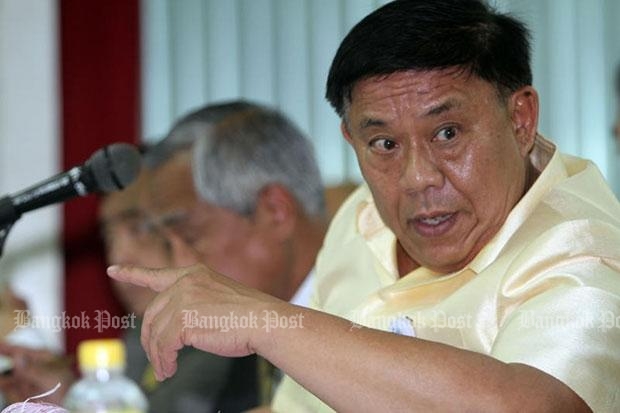 Deputy Prime Minister Prawit Wongsuwon told reporters the appointment of Pol Gen Aswin as Bangkok governor was based on his capabilities and suitability.

Pol Gen Aswin had also coordinated with the NCPO in maintaining law and order.

Gen Prawit said the prime minister decided to remove MR Sukhumbhand because he was involved in many legal cases.

The decision had nothing to do with the current situation in the nation.