Entertainment ban to be lifted on Nov 14 (Updated)

Prime Minister Prayut Chan-o-cha said the government expected cooperation from TV hosts and operators of entertainment venues to avoid activities that could be interpreted as "uproarious or wild". THANARAK KHUNTON

Tourists were once again allowed into Wat Phra Kaeo yesterday and the government announced that entertainment activities and normal TV programming can resume from Nov 14 with some restrictions.

Entertainment activities and normal TV programming can resume from Nov 14, following a month of national mourning for His Majesty the late King, the government declared Tuesday.

However, speaking after the weekly cabinet meeting, Prime Minister Prayut Chan-o-cha said the government expected cooperation from TV hosts and operators of entertainment venues to avoid activities that could be interpreted as "uproarious or wild".

More polite language should be used on TV entertainment shows that will resume on Nov 14, Gen Prayut said, stressing that this was a request for cooperation, not an order.

For documenting how Thais people – at home and abroad – mourn the death of His Majesty, Gen Prayut said he had ordered a government team to compile photos capturing daily mourning scenes into a photo book.

Assistant Bangkok governor spokeswoman Thaksada Sangkhachan said flags will no longer be flown at half mast from Nov 14. 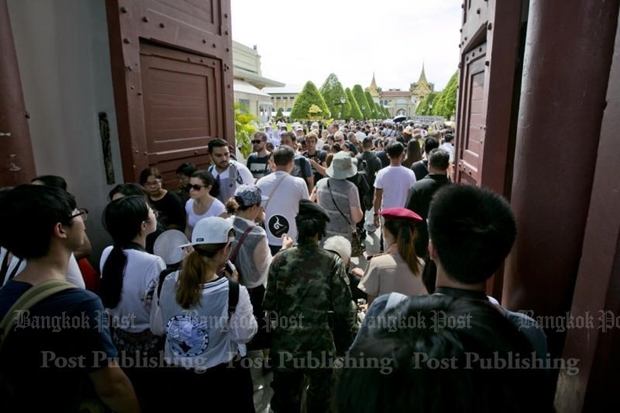 Foreign tourists stream through the Wiset Chaisi Gate to visit Wat Phra Kaeo which had been closed to tourists since His Majesty's passing on October 13. KRIT PROMSAKHA NA SAKON NAKHON

One of Bangkok's best-known tourist attractions, Wat Phra Kaeo was closed to tourists following the passing of His Majesty.

A large number of tourists, although not as many as usual, visited the temple Tuesday. Many dressed in dark-coloured clothing.

Visitors are now allowed to go sightseeing at the temple from 8.30am until 3pm through the Wiset Chai Si gate of the Grand Palace.

The cabinet will consider on Tuesday whether to allow entertainment activities and TV soap operas to resume on Nov 14, when the 30 day suspension of such activities ends.

Meanwhile, the centre approved in principle to allow online queue bookings for mourners who want to enter the Grand Palace to pay respects before the body of His Majesty.

The Ministry of Digital Economy and Society and the Ministry of Science and Technology have been assigned to design the online booking system, said Pongsawat Phanjit, 1st Army deputy commander.

Work is needed to establish quotas for walk-in visitors and those with online bookings, said Maj Gen Pongsawat, who is also the deputy director of the joint Peace and Order Administration Centre (POAC).

The Interior Ministry's Damrong Tham Centre in each province will assist mourners who want to make online bookings.

However, Lt Gen Sansern said the proposal needs careful consideration, adding if it proves impractical it will be discarded.