Sued four times for human rights report, lost one case & won another case dismissed once & for all by Supreme Court today.

The Supreme Court's ruling upheld those of the Court of First Instance in 2014 and the Appeals Court in 2015, due to an unlawful investigation and the fact that the alleged offence was committed in Myanmar.

Mr Hall, a human rights activist and researcher, was sued in four criminal and civil cases by Natural Fruit.

The barrage of lawsuits were in response to a report detailing workers' rights abuse at the company's pineapple processing plant in Prachuap Khiri Khan province that he had submitted to Finnish non-governmental organisation (NGO) Finnwatch.

The report was published in early 2013. Natural Fruit is one of the world's top 10 exporters of canned pineapple and juice.

FOUND GUILTY IN ONE CASE IN SEPTEMBER

In September, the Bangkok Criminal Court found Mr. Hall guilty of criminal defamation and computer crimes in writing and publishing the report.

Mr. Hall was sentenced to three years in prison but the court suspended the sentence (given a suspended sentence).

The activist said he would appeal against the ruling.

The suit regarding the Al Jazeera interview is an additional case to the initial defamation case, filed against Mr Hall after the initial case was taken to court.

Mr Hall said he would file a counter-suit against the police, the government and Natural Fruit company for unlawful prosecution and perjury. 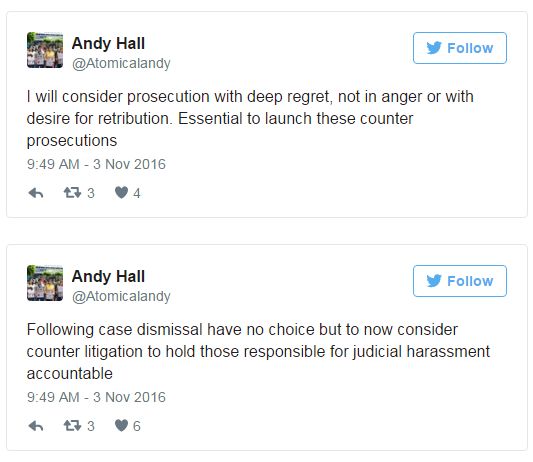