US Elections in English: Trump wins!

Republican president-elect Donald Trump acknowledges the crowd along with his son Barron Trump and his wife Melania Trump during his election night event at the New York Hilton Midtown in the early morning hours of November 9, 2016 in New York City. Donald Trump defeated Democratic presidential nominee Hillary Clinton to become the 45th president of the United States. Chip Somodevilla/AFP

Donald Trump has stunned America and the world, becoming the 45th president of the United States and proving the experts, the polls and even his own party leaders wrong.

I'll be updating this much of the day, at least until the winner is known. You can see yesterday's introductory lesson on the US elections here: http://www.bangkokpost.com/learning/advanced/1129960/follow-the-us-election-in-english-updated-

New York, Nov 9, 2016 AFP – Donald Trump has stunned America and the world, riding a wave of populist resentment to defeat Hillary Clinton in the race to become the 45th president of the United States.

The Republican mogul defeated his Democratic rival, plunging global markets into turmoil and casting the long-standing global political order, which hinges on Washington's leadership, into doubt.

"Now it is time for America to bind the wounds of division," Trump told a crowd of jubilant supporters in the early hours of Wednesday in New York.

"I pledge to every citizen of our land that I will be president for all Americans."

During a bitter two-year campaign that tugged at America's democratic fabric, the bombastic tycoon pledged to deport illegal immigrants, ban Muslims from the country and tear up free trade deals.

His message appears to have been embraced by much of America's white majority, disgruntled by the breadth and scope of social change and economic change in the last eight years under their first black president, Barack Obama.

Trump openly courted Russian leader Vladimir Putin, called US support for NATO allies in Europe into question and suggested that South Korea and Japan should develop their own nuclear weapons.

The businessman turned TV star turned-politico – who has never before held elected office – will become commander-in-chief of the world's sole true superpower on January 20.

The results prompted a global market sell-off, with stocks plunging across Asia and Europe and billions being wiped off the value of investments.

Although he has no government experience and in recent years has spent as much time running beauty pageants and starring in reality television as he had building his property empire, Trump at 70 will be the oldest man to ever become president. 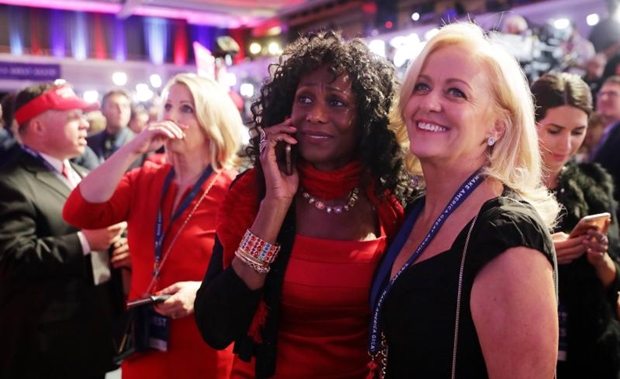 Donald Trump has added Pennslyvania to his victory list and now has 265 electoral votes, just five short of the 270 he needs. Another victory could come any minute now.

Technically, the race for the president is "too close to call," but Donald Trump leads Hillary Clinton in the electoral vote, 244 to 215 and he is comfortably ahead in most of the remaining states. His likely victory comes a big shock to many Americans and many people around the world. Here is the opening of an AFP story on Asia's reaction

Shock and angst in Asia as Trump rises

AFP – Donald Trump's stunning performance in the US presidential election triggered shock and angst in Asia, where observers fretted over the implications for everything from trade to human rights and climate change.

Although the race remained too close to call, Trump has won key states in the nail-biter against Hillary Clinton, building momentum as large numbers of American voters shrugged off concerns over the billionaire's temperament and lack of experience.

Trump's rise has been keenly watched abroad as he campaigned on a platform of trashing trade agreements, restricting immigration, dismissing climate change, and otherwise disengaging from the rest of the world.

In often hushed scenes, viewers at election-watching events around Asia stared at giant screens tallying the returns as they digested the impact of Trump possibly heading the world's most powerful nation.

The polls are now closed in almost the full country and Democrats are getting very nervous. The latest electoral count according to the Washingtop Post is Trump 201 and Clinton 190. To be president you need 270. Trump has just won Florida and he is leading in the key states of Wisconsin and Michigan, both supposed to be Clinton states. So will it be President Trump? It's still to early to say, but it is definitely possible.

Surprisingly, Donald Trump is still in the lead in the electoral vote count, 137 - 104. Most importantly, he leads in the key states of Florida, North Carolina, Virginia and Ohio. Political analysts are beginning to say that maybe the polls showing Clinton ahead were wrong.

Polls just closed in another big batch of states, including the electoral-vote-rich New York which has been projected to be an easy win for Hilliary Clinton. At the moment, according to CNN, she leads in the electoral vote count 97 to 84. Donald Trump is ahead in the popular vote, however.

Overall, the election is closer than many people expected and Donald Trump is very competitive in the States he needs to win, leading slightly in Florida and slightly behind in North Carolina and Ohiol

Polls have closed in about half of the United States. Based on projections in states where the voting patterns are clear, Clinton holds a lead in electoral votes of 60 to 44. That was not unexpected. The focus now is on Florida where the race is extremely close, North Carolina where Clinton has a moderate lead and Ohio where early voting has favoured Clinton. If she wins all three, analysts say, it's "game over". There would be no way Trump could win.

Polls closed in the first six states in Tuesday's US election at 7am our time. They were Georgia, Kentucky, Vermont, Indiana, South Carolina and Virginia.

As expected, the early returns indicate a clear win for Donald Trump in Kentucky and Indiana, while Clinton will win Vermont. Georgia and South Carolina should be friendly areas for Trump, but the big prize is Virginia which is expected to be close. 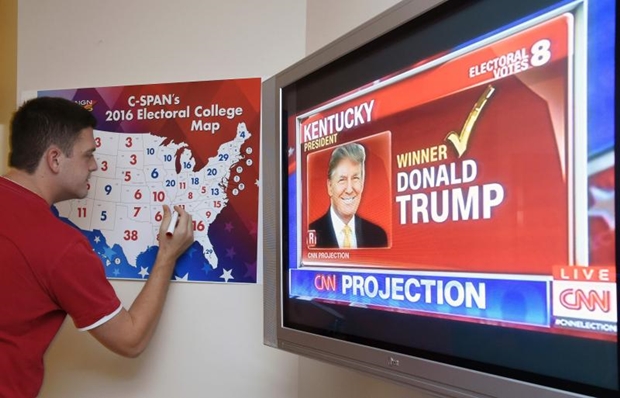 The big television networks are also saying that West Virginia, where polls closed at 7:30am, has  voted from Trump.

Polls will close in about 15 more states at 8am. 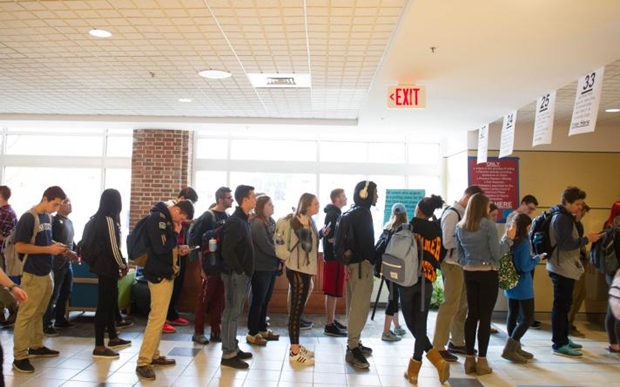 Penn State students stand in line inside the Student Union, called The Hub, waiting to cast their ballots in the presidential election on November 8, 2016 in State College, Pennsylvania. Students were experiencing waits of up to 45 minutes to an hour during peak times. Jeff Swensen/AFP