Old trawlers take on a new role as artificial reefs

he Command Centre for Combating Illegal Fishing sank trawlers in the Gulf of Thailand off Phetchaburi to create new habitats for marine life. PATTANAPONG HIRUNARD

Eight more old fishing vessels were sunk in the Gulf of Thailand Tuesday to create new habitats for marine life.

Eight old fishing vessels were sunk in the Gulf of Thailand Tuesday to create new habitats for marine life.

The boats were sunk around 12 nautical miles off the coast of Phetchaburi province.

The vessels will provide new habitats for many kinds of marine life, Capt Sahapon said.

A first batch of 32 vessels were sunk between Oct 15-31. The eight sunk Tuesday were part of a second batch of 16 vessels scheduled to be sent to the sea bed.

The government bought 48 old vessels from fishing operators who wanted to leave fishing to pursue other careers, he said.

Capt Sahapon said the government wants to buy up fishing vessels equipped with push nets to help end this method of fishing.

As part of this policy the government bought the 48 vessels to turn them into ecologically friendly artificial coral reefs, he said. 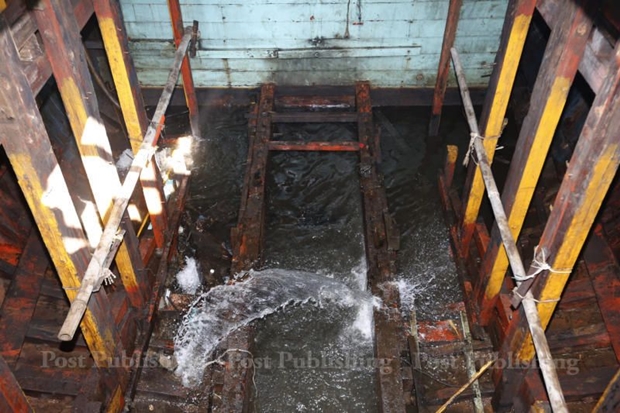 Water enters to the hull of one of the trawlers destined for the sea bottom. PATTANAPONG HIRUNARD

Push net fishing is seen as being a highly destructive form of fishing, as is otter trawl fishing that involves dragging a net along the sea bed.

Equipment for this type of fishing cannot be used without a licence.

The Department of Fisheries stopped granting licences for otter trawl and push nets in 1981.

Wicharn Ingsrisawang, a Department of Fisheries inspector, who helped oversee the sinking of the trawlers, said the sunken vessels would help increase the marine life population in Thai waters.

The government plans to promote spots where the sunken vessels are located as tourist attractions to allow visitors to observe what is hoped will be a thriving marine life population inhabiting the artificial reef, he added.