Motorcyclist members of Motorcyclist's Liberation facebook page gather to protest traffic police running over foot of fellow motorcyclist who only wanted an explanation of the ticket he received (Source: Post Today & Facebook video)

Over 100 disgruntled motorcyclists on Sunday blocked all four lanes of a road beneath Rama IV Expressway in a protest over a dispute involving a traffic police officer and a motorcyclist..

Motorcyclists blocked the road at around 11am on Sunday, causing heavy traffic congestion on Rama IV Road.

Most of the protesters were members of Pod-aek Chao Songlor [ Motorcyclists’ Liberation ] Facebook page.

The protest came after a traffic policeman ran over a man's foot after refusing to listen to the man's explanation.

The incident took place on Nov 21 and a video clip was posted to social media by the angry man named Owat Kwaithai.

A police officer issued him a traffic ticket for violating traffic regulations at a road checkpoint in front of Queen Sirikit National Convention Center on Nov 21.

The man wanted the traffic police to explain why he had to use the right lane but the officer shunned this explanation and scolded him. 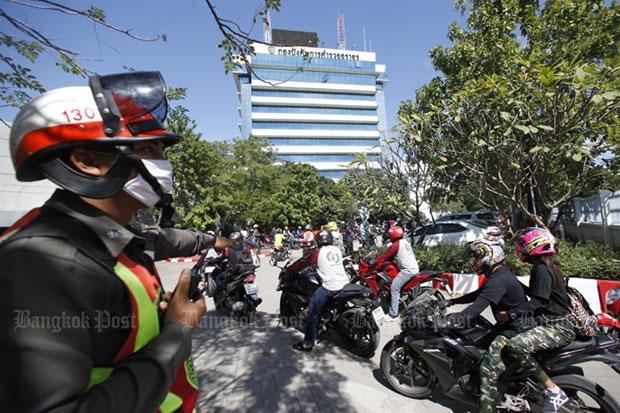 Motorcyclists, upset over a clip involving a traffic police and one rider, move to the Traffic Police Division to lodge a complaint after ending a road blockage on Rama IV Road on Sunday. (Photo by Pattarapong Chatpattarasill)

MOTORCYCLISTS ANGRY AFTER BEING BARRED FROM RIGHT LANE, BRIDGES & TUNNELS

The video clip sparked an outcry from members of the facebook group who were earlier upset with traffic rules barring motorcycles from using bridges, tunnels and the right lane.

After negotiations lasting about 20 minutes, the angry motorcyclists agreed to end the road blockage before moving to the Traffic Police Division on Vibhavadi Rangsit Road.

At 1pm, representatives of the protest group lodged a complaint with the Traffic Police Division against Pol Sub Lt Supachai Kritsanaseranee, who was in the clip, for his inappropriate conduct (misconduct).

Peerasit Jirawongpaisarn, administrator of the Pod-aek Chao Songlor Facebook page, said the accused officer had looked down on the motorcyclist in the clip.

His group also cast doubts on the setting up of road checkpoints as they wanted to know whether the stops help facilitate traffic flow or just allow officers to impose fines to lift the number of traffic violations.