His Majesty presides over a ceremony to unveil a new provincial hall in his first visit since assuming the throne. PATTARAPONG CHATPATTARASILL

His Majesty the King on Friday arrived in the southern province of Krabi to preside over a ceremony to unveil a new provincial hall in his first visit since assuming the throne December 1.

Krabi – His Majesty the King on Friday arrived in the southern province to preside over a ceremony to unveil a new provincial hall in his first visit since assuming the throne, to the delight of people who spilled onto the streets to greet him.

Krabi has gone down in history as the first province that His Majesty the King has visited since his accession to the throne on Dec 1.

Local residents in Krabi and nearby provinces including Phuket, Phangnga and Surat Thani flocked to catch a glimpse of the King.

Welcome signs reading "Long Live the King" were put up across this popular tourist destination, which lies along the coast of the Andaman sea in southern Thailand as houses and buildings were adorned with national flags, as well as flags bearing the royal insignia of His Majesty the King. 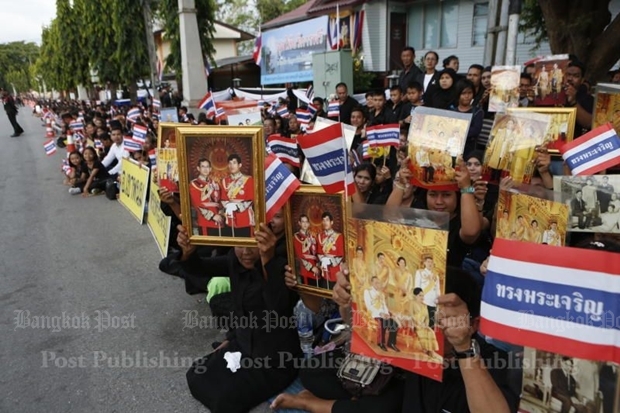 Some people had camped out near the provincial hall on Thursday night for a better chance of seeing the King as hundreds of police, soldiers and officers from the provincial explosive ordnance disposal unit were deployed to maintain security around the area.

Local Thai Muslims wearing traditional dress turned up for the royal visit as well-wishers lined the streets holding photos of His Majesty along the route of the royal motorcade.

Krabi governor Phinit Boonlert said that officials from the Department of Public Works, Town and Country Planning had built and decorated a royal pavilion where the King presided over the ceremony to open the new provincial hall. 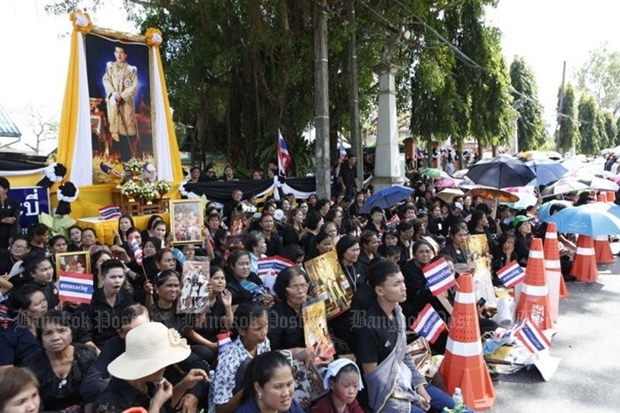 Large crowds were already lining the streets of Krabi this morning, hours before His Majesty the King was due to arrive. POST TODAY photo

Tens of thousands of people in Krabi and neighbouring provinces are waiting in eager anticipation for a royal visit by His Majesty the King.

It will be His Majesty the King's first upcountry visit since his accession to the throne on Dec 1.

Krabi governor Phinit Boonlert said His Majesty will preside Friday over a ceremony to open a new provincial hall in the province, scheduled for 3pm.

Local people are delighted that the southern province of Krabi will be the first province to be visited by His Majesty the King.

Mr Phinit said that residents from Krabi's eight districts and nearby provinces are expected to turn up and welcome His Majesty the King along the roads from the Krabi airport to the provincial hall.

Preparations and security arrangements are now ready for the royal visit, Mr Phinit said, adding that officials had rehearsed the ceremony to welcome the King.

The provincial governor asked that local residents, and state agencies adorn their houses and buildings with national flags and portraits of His Majesty during the royal visit.

Mr Phinit expected a turnout of at least 36,000 people, and added that local fruits, Otop products, as well as a total of 10 lobsters will be presented to the King.

Krabi mayor Kiratisak Phukaoluan said Krabi residents are grateful that His Majesty's first official visit as king will be to their province. The late King visited Krabi in 1959, 1970 and 1973.

"People in Krabi and surrounding provinces are waiting eagerly for His Majesty the King to arrive," Mr Kiratisak said, adding that local people were helping to tidy up buildings in the city to prepare for the royal visit.

"His Majesty is the unifying force of all Thais. Thailand has the three major institutions – nation, religion, and the monarch – and the country cannot be without any of the three institutions, particularly the monarchy which has existed for a long time.

"We, the people of Krabi, would like to make a pledge of allegiance to His Majesty King Rama X," Mr Kiratisak said.

Under the guidance of the King, the province will develop and prosper, the Krabi mayor said. 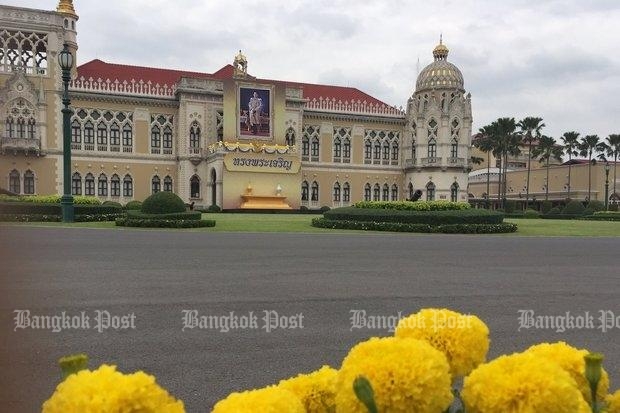 Government House has received a new look with the portrait of His Majesty King Maha Vajiralongkorn Bodindradebayavarangkun. WASSANA NANUAM

Meanwhile, His Majesty the King on Wednesday granted the 10 newly appointed members of the Privy Council an audience to make an oath of allegiance at the Ambara Villa at the Dusit Palace.

Privy Council President Prem Tinsulanonda led the 10 Privy Council members in swearing a pledge of allegiance before His Majesty the King.

After the oath-taking ceremony, the King extended his thanks to the privy councillors for their intention to help with his work.

The King said the privy councillors will be given assignments, as well as an opportunity to provide him with advice. They will also help to maintain the security of the country in line with policies regarding the royal institution.