Hundreds of monks 'join a prayer' at one of the entrances to Wat Phra Dhammakaya. (Photos by Apichit Jinakul)

Tensions remained high at Wat Phra Dhammakaya as a large number of disciples of the controversial temple continued to gather at the temple grounds despite a DSI raid initially planned for Tuesday being called off.

Tensions remained high at Wat Phra Dhammakaya as a large number of disciples of the controversial temple continued to gather at the temple grounds despite a raid by the Department of Special Investigation (DSI) initially planned for Tuesday being called off. 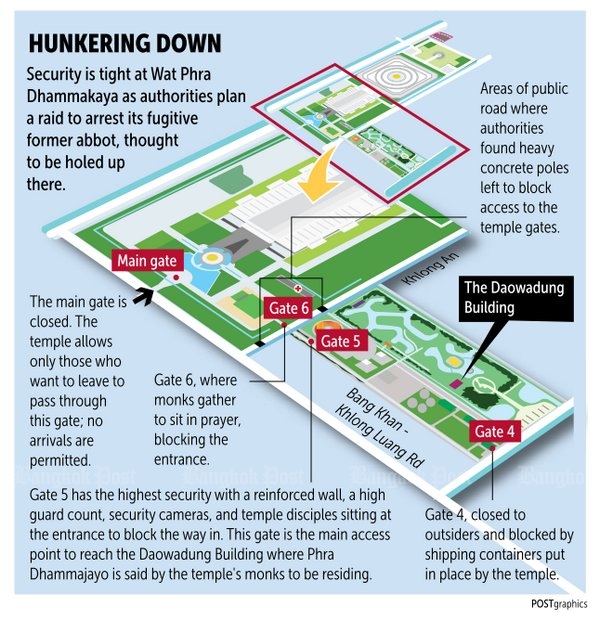 A source in a combined police team which will be responsible for raiding the temple and arresting the embattled former abbot Phra Dhammajayo, said Pol Gen Srivara Ransibrahmanakul, deputy national police chief, objected to the four separate search warrants for the operation.

According to the source, the Royal Thai Police plans to seek a new search warrant with some changes in the details of the operation and the time frame expanded to four days for a single warrant, instead of four one-day search warrants.

The source said a new operation plan would likely be designed and a new search warrant would then be requested.

The former abbot is wanted by police on money-laundering charges in connection with the multi-billion-baht Klongchan Credit Union Cooperative embezzlement scandal. The case was investigated by the DSI.

The monk is also the subject of arrest warrants issued by the Sikhiu and Loei provincial courts in connection with alleged forest encroachment in Sikhiu district of Nakhon Ratchasima province and in Loei province.

The Criminal Court on Tuesday rejected a request by the temple's legal team to revoke the search warrants granted to the combined search team, said a source.

The court reasoned that there was no reason to consider cancelling the search warrants as requested by the temple, said the source.

Meanwhile, Phra Maha Nopporn Poonyachayo, assistant director of the temple's communications office, told a large group of reporters who showed up to cover the expected raid at the temple in Pathum Thani that the media would not be allowed to enter the temple Tuesday for safety reasons.

According to the monk, the temple had to maintain stringent security measures as a large number of faithful were coming to the temple to pray. He said many people began arriving at the temple from Monday night. 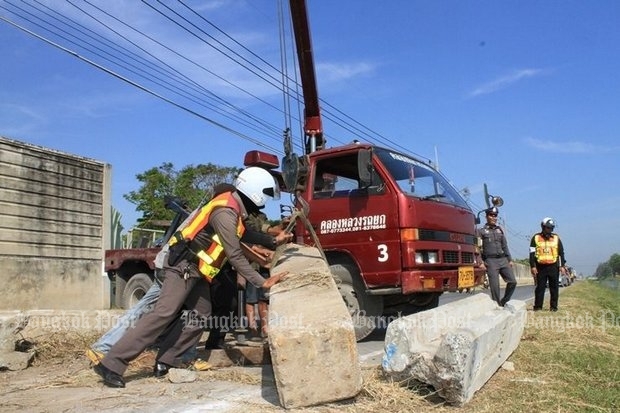 Police at Klong Luang station in Pathum Thani needed a crane to remove concrete piles placed by temple saboteurs in an effort to block a road leading to the sect's headquarters.

In another development, Pathum Thani police have removed the broken concrete piles which had been blocking a road along a canal on one side of Wat Phra Dhammakaya Tuesday morning.

On seeing the police patrol, a group of men beside the obstruction jumped into the car and quickly drove into the temple through gate No 5. He believed the broken piles were placed there by disciples of Wat Phra Dhammakaya. 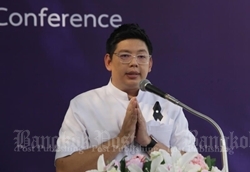 Police were looking for evidence to identify the people responsible.

In the complaint, the DSI accused Mr Ong-art of inciting rebellion by declaring on Sunday a nine-point stance claimed to be on behalf of all followers of the temple, Pol Maj Woranan said.