Goodbye to Thailand's biggest gold mine

Goodbye to Thailand's biggest gold mine

Thailand's biggest gold mine is closing from January 1st next year.

The company will lay off more than 1,000 workers.

The closing comes in response to the regime's latest Section 44 order to suspend operations of all gold mines (read previous articles here & here). 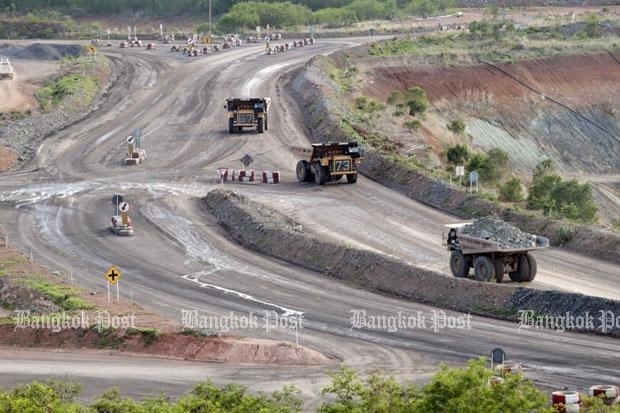 AUSTRALIAN COMPANY HAD MINING RIGHTS UNTIL 2028

The gold mine is the Chatree mining complex in Phichit operated by the Australian company Akara Resources.

The company is a subsidiary of Sydney-based Kingsgate.

The company's gold mining concession at the site would have expired in 2028.

Following the order, some 1,004 employees have received lay off letters with a compensation package of up to 300 days' pay for those who have been with the company for at least 10 years.

A company source said most of those who were laid off are locals who were hired to work at the gold mining site.

Meanwhile, some office workers such as accounting and mining rehabilitating staff remained employed. 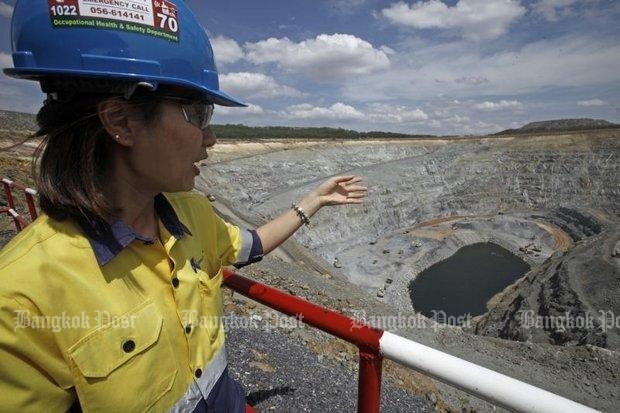 This Australian-controlled Chatree gold mine in Phichit province, owned through its Thai subsidiary Akara Resources, is shutting down, firing 1,000 Thais and moving to Chile, 'a government that understands mining.

The National Council for Peace and Order (NCPO) chief Gen Prayut Chan-o-cha on Tuesday exercised his power under Section 44 of the interim charter to issue an order to suspend gold mine operations from Jan 1.

The order also stops authorities from issuing and renewing gold mine exploration or concession licences.

According to the order, the move aimed to tackle conflicts between residents and gold mine operators, and the environmental and health problems linked to gold mine operations in various areas.

The order also requires the ministry responsible to examine the problems and propose measures to tackle them as well as a coming up with a plan for managing gold resources. It also assigns the Labour Ministry to help workers affected by the order.

The cabinet previously suspended moves to renew the company's metallurgical processing licence citing conflicts with the locals living near the mining site who said its activities have damaged their health and the environment.

However, to limit its impact, the cabinet allowed production to carry on until the end of this year. 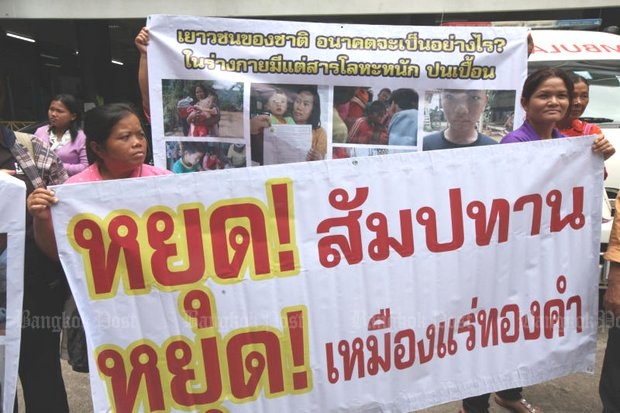 The biggest factor in closing Chatree was public pressure, such as this protest in May of last year claiming numerous villagers had become sickened by the mine operations. (Bangkok Post file photo)

The company said it had always done everything legally and insisted its operations had not damaged the environment or residents' health.

Kingsgate said it will not return to Thailand without an "ironclad guarantee" from the government that it will be allowed to operate without interruption.

The National Legislative Assembly (NLA) passed legislation last week that could allow mining with a lesser degree of regulation.

But Kingsgate executives said they are once bitten, twice shy.

"We'd need an ironclad guarantee of tenure," Ross Smyth-Kirk, chairman of Kingsgate, told The Associated Press in a telephone interview.

"It's been a disgrace. There's still a lot of gold there still to be taken out, needing expertise of people like ourselves who are prepared to spend big investments to get it out. It's not some tin-pot operation."

COMPANY PLANS TO MOVE ON TO CHILI

He said Kingsgate is planning a new mine in Chile, and hopes to launch operations there after they finish paying off their debt, which now stands at about $10 million, by the end of the year.

Jatuporn Buruspat, chief of the Pollution Control Department, said staff would consider how to rehabilitate the gold mining site.

He said the issue needs to be discussed with state agencies, including the Ministry of Industry and the Ministry of Public Health, adding the rehabilitation process must be carried out together with the company.