Thai education fails the test while Singapore and Vietnam excel. Why?

The Programme for International Student Assessment (PISA) is a worldwide study of 15-year-old school pupils' scholastic performance on mathematics, science, and reading, sponsored by the Organisation for Economic Co-operation and Development (OECD). (Main photo Creative Commons)

Thai students' poor performance in the recent international student assessment report is sparking curiosity over the education systems of Singapore and Vietnam which appear to be producing some of the best students in the world.

Much of the basic information in the original version of this story was covered by the same writer in a story earlier this month (pisa test rankings). Thus, we will focus here especially on the comparison of the Thai educational system and those of Vietnam and Singapore

The Organisation for Economic Cooperation and Development's (OECD) recent international student assessment report has triggered concerns over the quality and capabilities of Thai students, while sparking curiosity over the education systems of Singapore and Vietnam.

The results of 2015 Programme for International Student Assessment, or PISA 2015, released recently show a fall in scores among students in Thailand while Singapore beat China to rank top out the 70 countries analysed.

One big surprise was the scores of Vietnamese students, who improved considerably on their last ranking, moving up to 8th place from 17th in the previous assessment in 2012, and beating the scores of several developed countries. 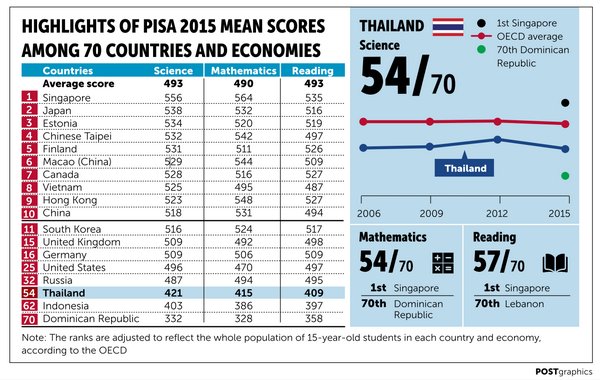 Thailand came 54th, with scores dropping in all subjects since the 2012 assessment. Classified by subject, Thailand ranked 54th for maths, 57th for reading, and 54th for sciences.

Thailand first participated in the PISA test in 2000. The test is a triennial survey conducted by the OECD to assess the ability of 15-year-old students in reading, mathematics and science.

So what are the reasons for Singapore and Vietnam's success?

In a piece written for the BBC, OECD education director Andreas Schleicher said that a key factor had been the standard of teaching. Singapore managed to achieve excellence without wide differences between children from wealthy and disadvantaged families.

"Singapore invested heavily in a quality teaching force – to raise the prestige and status of teaching and to attract the best graduates," wrote Mr Schleicher, adding that the country recruits its teachers from the top 5% of university graduates.

In the case of Vietnam, Mr Schleicher attributed the country's success to forward-thinking government officials, a focused curriculum and higher social standing and investment in teachers.

He also drew attention to Vietnam's curriculum, which has been designed to allow students to gain a deep understanding of core concepts and master core skills as opposed to the "mile-wide but inch-deep curriculums" of Europe and North America.

"Almost 17% of Vietnam's poorest 15-year-old students are among the 25% top-performing students across all countries and economies that participate in the PISA tests. In comparison, the average across OECD countries is that only 6% of disadvantaged students are considered resilient by this measure," the BBC article states.

Thailand's Institute for the Promotion of Teaching Science and Technology said the PISA results reflect a breaking of the trend: that performance in education is linked to a country's level of GDP and state expenditure on education.

The institute said the work ethic of the Vietnamese has ensured that teachers work hard, are responsible and are disciplined – and they rarely take time off.

So what's going on in Thailand?

"It indicates that Thailand is failing to improve equity in educational resource allocation," he said.

Mr Athapol said the Education Ministry, in the past two to three years, has invested money trying to get better results in the PISA test, training teachers and students for the PISA assessment, but the performance is still poor.

"I think the ministry has made a wrong turn. Instead of spending money on training teachers and students in some schools for the PISA test, it should focus on narrowing the gap between students in elite schools and those studying in underprivileged schools," he said.

Education Minister Teerakiat Jareonsettasin admitted he was also disappointed with the performance of Thai students. The results, he said, reflected a huge gap in ability between students in elite schools and those in underprivileged schools.

Mr Teerakiat noted that the performances in science, reading and mathematics of students at certain schools such as Mahidol Wittthayanusorn and Chulabhorn Wittayalai is at the same level as schools in countries which were placed at higher rankings in the PISA results.

But, the PISA results show the collective performance of students of all schools and, hence, the results are a letdown, said the minister.