Sand beds replace deckchairs on Patong beach. Authorities will discuss the legality of sand beds at a meeting of local and provincial officials. (Photos by Achadtaya Chuenniran)

Local authorities on Friday ordered vendors on Patong beach to level the sand beds they have created in defiance of government policies to keep beaches clear for the public.

PHUKET: Local authorities on Friday ordered vendors on Patong beach to level the sand beds they have created in defiance of government policies to keep beaches clear for the public.

Local administrators and officers from the Third Fleet of the Royal Thai Navy met on Friday to discuss how to deal with vendors who have been piling up sand and spreading soft mats to woo tourists. The move violates a ban on beach chairs and umbrellas imposed with varying degrees of success at popular tourist spots throughout the country.

Most tourists and local residents have applauded the ban, as it addresses a common complaint about unsightly clutter on the beaches. Some beaches had come under the control of "deckchair mafia" groups bent on squeezing as much money as possible out of every square centimetre of sand.

Under the ban that took effect two years ago in Phuket, vendors were limited to using 10% of the space on Patong beach for their services including umbrellas, mats, food and beverage sales. Beach chairs were prohibited.

They must not place any object on the beach until a tourist approaches to seek their service. Only mats and umbrellas are allowed to be served when there are requests.

The sand beds emerged recently after a few big vendors on Patong created about 100 of the structures to rest the response.

PHUKET – Sand beds built on Patong beach by wily entrepreneurs trying to get around the ban on deckchairs and which they claim serve the needs of elderly tourists have local officials scratching their heads.

They are not sure if they are legal or not, but are still determined to oppose them.

Patong mayor Chalermluck Kepsap said on Thursday the appropriateness of the sand beds would be raised with the committee that regulates beaches in Patong, and with the new Phuket governor. 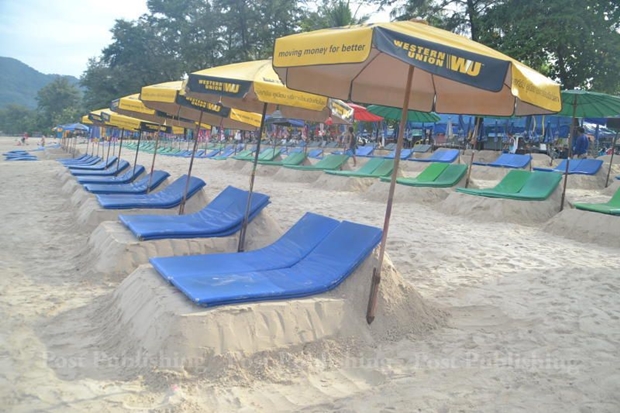 Operators had explained to the Patong municipality that they had erected the sand beds in the zoned area to serve tourists, particularly the elderly and those with disabilities. They would be far more comfortable sitting on a sand bed with a cushion on top and an umbrella to offer shade than they would be sitting on the bare sand.

But after reviewing the beds, the municipality felt they were an eyesore and would ruin the natural beauty of Patong beach.

“In my view, beach chairs would be better on the beach as sand beds will erode the beauty of Patong beach. I have asked the district-level committee tasked with regulating beaches to discuss the matter with the provincial-level panel," Ms Chalermluck said.

Thewan Promyang, 44, disagreed. He said the sand beds he had built on Patong beach were there to serve certain groups of tourists – people with illnesses or disabilities, and the elderly. These people had problems when sitting on the beach.

There are about 100 sand beds on Patong beach. Each took 20 to 30 minutes to build. The charge for a sand bed with a cushion and an umbrella was 300 baht, and 200 baht for one without a cushion. Tourists could use them for the whole day, from 8am to 6pm, he said.