64-year-old made five round trips in 31 hours

The driver of the van involved in a horrific crash in Chon Buri which left 25 dead on Monday was likely to have dozed off behind the wheel as he had made five round trips within 31 hours, according to officials. An autopsy found no drugs or alcohol in his body.

Tests found no alcohol or drugs in the body of the 64-year-old driver of the passenger van that collided head-on with a pickup and exploded in Chon Buri on Monday, killing 25 people, police said on Wednesday.

The criminal investigation of the accident was now closed, it was announced.

Pol Maj Gen Pornchai Suteerakune, commander of the Institute of Forensic Medicine, said the autopsy found no trace of alcohol or drugs in Sumon Eiamsombat's blood or tissue.

Pol Maj Gen Piyaphan Pingmuang, deputy police spokesman, said the criminal case arising from the collision was now closed because the driver who allegedly caused it was killed in the incident. However, relatives of the victims could file a civil lawsuit for compensation.

Crash driver 'likely to have dozed off'

The driver of the van involved in a horrific crash in Chon Buri which left 25 dead on Monday was likely to have dozed off behind the wheel as he had made five round trips within 31 hours, according to officials.

The van was heading from Chanthaburi to Bangkok, a distance of 250km, when it swerved out of its lane and crashed into a pickup truck travelling in the opposite direction on a highway in Chon Buri's Ban Bung district. 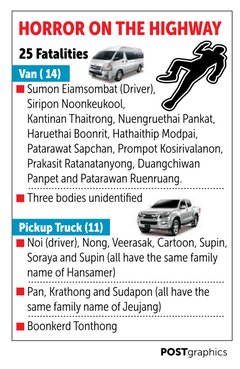 A fire broke out in the van following the crash, which subsequently killed 14 out of 15 people on board, including the driver. The collision also killed 11 of the 12 people in the pickup.

Ponsak Thaijeam-aree, chief of the Chanthaburi Land Transport Office, said the van driver, Sumon Eiamsombat, 64, started work at 4am on Jan 1, when he left Chanthaburi for Bangkok. He began his second trip at 11.30am when he left the capital for the province. He later departed from Chanthaburi to Bangkok at 6pm.

On Jan 2, he started working at 5am, when he left Bangkok for Chanthaburi, and set off to return from the province at 11.30am.

"The driver should have had more rest and this was likely to be the cause of the crash," Mr Ponsak said.

Chon Buri governor Pakarathon Tienchai said officials who inspected the scene reported there were traces of the brakes being used at the spot where the van was seen losing control and crossing a ditch dividing the road before colliding with the pickup.

"The van driver was believed to have fallen asleep behind the wheel as he was 64 years old," the governor said.

When he regained consciousness, he tried to brake while the vehicle was moving at a high speed, causing the vehicle to veer off the lane and hit the pickup in the opposite lane, he said.

However, Mr Pakarathon said this was only the most likely cause, based on initial investigation at the accident site and conversations with some witnesses. A more thorough investigation is still needed to determine and prove the cause of the accident, he said.

Mr Arkhom said the labour law stipulates drivers for transport vehicles must not work more than eight consecutive hours and in this case, the investigation must look into how long the van driver had been working.

The incident may have been caused by driver fatigue and the speed at which he was driving, he said. The van passed a check in September last year and no problem was found with its gas cylinder.

It is probable that the fire was triggered by the fuel system, but further investigation is needed, the minister said.

Siwakon Buapong, chief of the Disaster Prevention and Mitigation Provincial Office in Chon Buri, said the driver should have had more rest after the five-hour drive from Bangkok to Chanthaburi.

"Most van drivers' earnings are based on round trips as well as a percentage from passenger fares. This gives drivers an incentive to drive fast in order to make more round trips, particularly during the New Year period," Mr Siwakon said

However, a conductor at the queue for the vans insisted the driver was well-rested before driving.