The main streets of Nakhon Si Thammarat town were knee-to-waist deep at the peak of the flood. (Reuters photo)

Outbreaks of heavy to very heavy rain are forecast for 13 provinces central and southern from now until tomorrow. Almost one million people have been affected, with 19 dead and one missing.

A policeman who saved a boy's life and was then swept away by a flash flood in Krabi on Sunday night was found alive, battered and exhausted, clinging to a tree early on Monday.

Pol Sgt Major Kritthanapol Samranjit, of Krabi police station, rescued a boy unable to stand up in the surging flood at a bridge in Muang district about 9.15pm on Sunday while he was on traffic duty.

The boy was helped to safety but the traffic officer was swept away by the strong, rapidly rising current.

Rescuers and  colleagues searched desperately and finally found Pol Sr Sgt Maj Kritthanapol about 1am on Monday and took him to Krabi Hospital, according to the  #RTPspokesmen Facebook account.

He was found clinging to a tree  he had managed to reach, exhausted and battered but otherwise well.  It was unclear how far the strong current took him from the bridge where he rescued the boy.

His heroic act drew praise on social media, with people wishing him a quick recovery.

The Krabi municipality was one of the areas in Krabi hard hit by sudden floods from storm run-off on Sunday night as heavy rain continued to pound the southern region.

Muang district chief Suriyan Narongkul told INN on Monday that the water had drained off and the situation had return turned normal in the municipality.

Thirteen provinces in the lower Central region and the South have been warned to brace for more possible flash floods as heavy rain is forecast over the next day or so, according to the Meteorological Department yesterday. 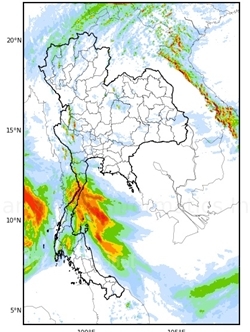 A forecast model for tonight and tomorrow via Thaiwater.net The heaviest rain should be in the upper South with some improvement elsewhere.

Outbreaks of heavy to very heavy rain are forecast for the 13 provinces from now until tomorrow as an active low pressure cell over the Andaman Sea and the west coast of the South moves north slowly into the Gulf of Martaban and Myanmar, according to the weather bureau.

A strong northeast monsoon still prevails over the Gulf of Thailand and the South, causing waves of up to 2-3 metres high in the Gulf and Andaman Sea.

All vessels should proceed with caution, and small boats should remain ashore for the next few days.

According to the Disaster Prevention and Mitigation Department, the floods have ravaged 10 provinces in the region since the new year, with the situation starting to ease in Yala and Ranong.

More than 958,000 people have been affected, with 19 people killed and one missing.

In Songkhla, fourteen of the 16 districts of the southern provinces have been declared flood disaster areas. Only Na Thawi and Thepha districts were spared the designation.

The air force deployed a C-130 military transport aircraft to carry relief items, essentials, food, drinking water and flat-bottomed boats to Wing 56 based in Songkhla where they were distributed to flood victims, particularly in Nakhon Si Thammarat's Cha-uat district which is among the areas hardest hit by floods. 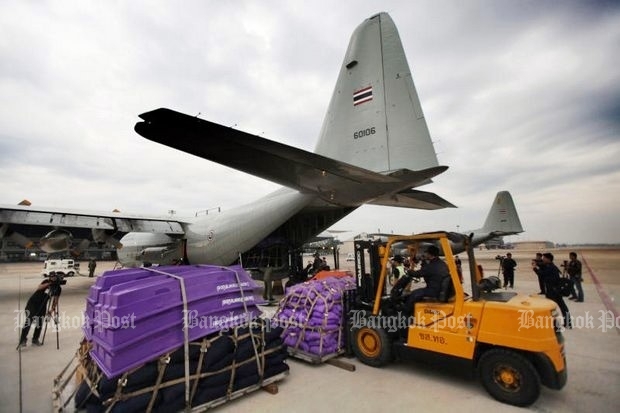 Air Force personnel load relief supplies and essentials, including those from the Friends in Need (of 'Pa') Volunteers Foundation, onto a military transport aircraft at Wing 6 of Don Mueang on Sunday. THITI WANNAMONTHA

The main roads in central Nakhon Si Thammarat – Ratchadamnoen and Pattanakarn Khukwang roads – were opened to all types of vehicles, though some communities were still submerged in 50cm-high water.

From Songkhla, a total of 50 water-propelling boats were unloaded from the ship and carried on trucks to Nakhon Si Thammarat's Hua Sai and Pak Panang districts to support the draining of floodwater to the sea.

Each boat has the capacity of propelling 24 cubic metres of water per minute, Capt Apichart added.

In Trang, provincial governor Siripat Pattakul alerted flood-prone areas along the Banthat mountain range and those living on islands and near high hills, of possible forest run-off and mudslides as heavy rain had continued unabated in the province. 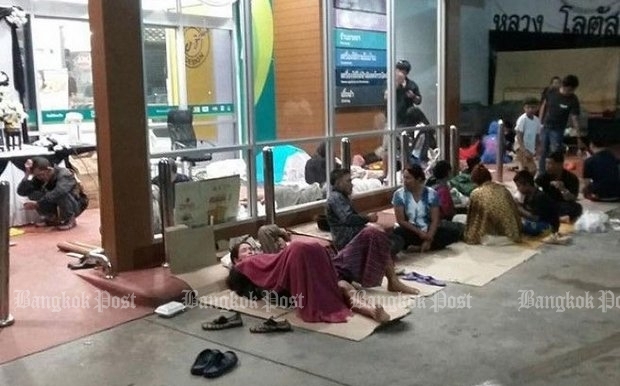 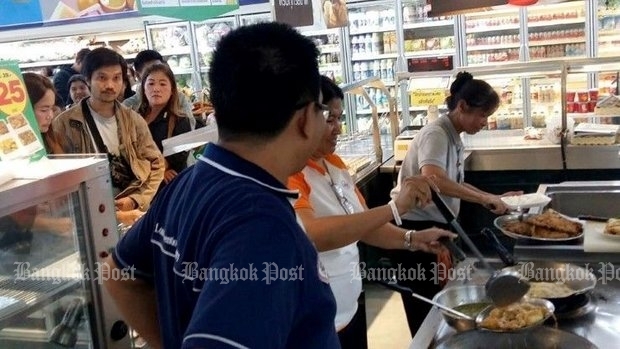 Above: Surat Thani residents forced from their homes sleep outside a Lotus mini-mart, which provided flood victims with free food. (Post Today photos)

While flooding in most areas in Trang began to recede, floods remained high in areas along the banks of the Trang River as they took in water from upstream locations.

In Chumphon, Watjana Watjanakupt, head of the provincial disaster prevention and mitigation office, said the flood situation in Lang Suan district was still critical, with flood levels as high as one metre in low-lying areas, which was affecting local morale. At this stage, cooked food is the most essential for flood victims, she said, adding that more than 47,000 people in Chumphon have been affected.