Many houses in Surat Thani were almost completely submerged during the last round of flooding and water levels remain high in some areas. SUPAPONG CHAOLAN

People in southern provinces and local authorities are bracing for a new round of floods after more heavy rain was forecast in the region this week.

People in southern provinces and local authorities are bracing for a new round of floods after more heavy rain was forecast in the region this week. 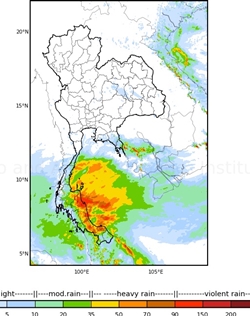 Actually, this weather projection for tonight and tomorrow looks a bit better than the ones of a few days ago. There is not as much extreme heavy rain in this forecast. Meanwhile, rain as already started to fall in many southern provinces. As of this morning, Surat Thani had received 30mm and Nakhon Si Thammarat 20mm. Source: Thaiwater.net

Government spokesman Sansern Kaewkamnerd said Sunday that Prime Minister Prayut Chan-o-cha has ordered provincial governors and local administrative agencies to beef up precautionary measures against flooding as heavy rainfall is expected in the South, according to the Thai Meteorological Department.

The rain is expected to start from Monday and last until Wednesday.

"The prime minister ordered all southern provincial governors to warn people of possible flooding and devise measures to tackle floods this week," he said.

Small craft should stay ashore due to gusty winds and strong waves.

Villagers were also advised to closely follow weather forecast updates and announcements from the government.

Those who need assistance can contact both local and central state agencies or call the government's hotline at 1111 and the Department of Disaster Prevention and Mitigation (DDPM) call centre on 1784, around the clock.

More than 70 water pumps and 50 water jet propulsion machines have been installed in both provinces and other flood-hit areas to discharge water to the sea as quickly as possible.

Besides the measures to tackle flooding this week, Lt Gen Sansern said Gen Prayut also directed the Interior Ministry to gather information on city planning papers in the southern provinces to draft a drainage plan as a long-term solution to flooding.

Meanwhile, DDPM director-general Chatchai Promlert  wrote Sunday to chiefs of the DDPM offices in the South, warning them of possible flooding, flash floods and landslides caused by heavy rain in five provinces.

Mr Chatchai also ordered both offices to put equipment, machines and vehicles necessary for rescue missions on standby around the clock, adding the preparations must be reported to the department.

According to the DDPM, floods in the South this month have claimed 41 lives. 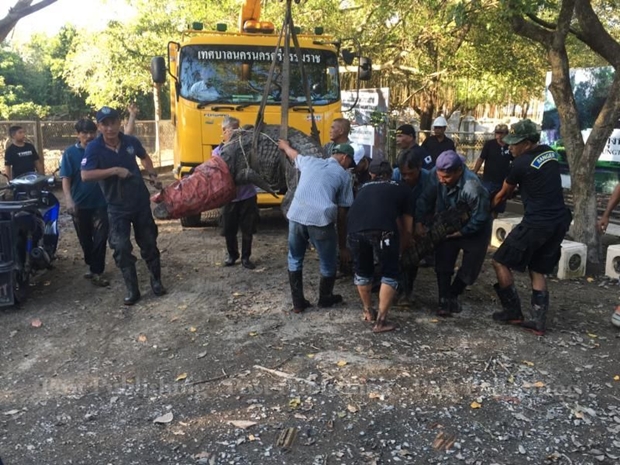 Officials have recaptured the giant crocodile Nadia who had earlier escaped from the local zoo in Nakhon Si Thammarat during the first round of flooding. Now there are worries that some of the 4000 crododiles on private farms may escape if the new round of flooding is serious.

The inspection aimed to prevent more than 4,000 crocodiles from escaping from farms if they are flooded.

The government held a televised charity programme last night to mobilise donations from people nationwide to help flood-affected victims in the South.

At least 329 million baht had been donated at press time.