Water buffaloes taken away from the Thale Noi wetlands in Phatthalung when they were flooded recently are returning to their homes now the floods are receding. (Photos by Apinya Wipatayotin)

Hundreds of water buffaloes taken away from flooded Thale Noi wetlands in the southern province two months ago will now return to their homes due to receding water levels.

Phatthalung: Hundreds of water buffaloes taken away from flooded Thale Noi wetlands in the southern province two months ago will now return to their homes due to receding water levels.

After heavy rains triggered flood waters which hit Phatthalung two months ago, the owners of these animals moved them out of the flooded area to higher ground.

Somyot Kapuak, who feeds 12 buffaloes, said he moved his cattle from Thale Noi wetlands to stay at Thale Noi non-hunting area nearby in Khuan Khanun district due to the heavy floods.

Mr Somyot said his animals did not have dry grass to eat and dry land to live on due to the floods. Without these, his animals would not be in good health.

Now the flood waters have receded, he has moved them back to Thale Noi wetland so they can stay in a familiar place. 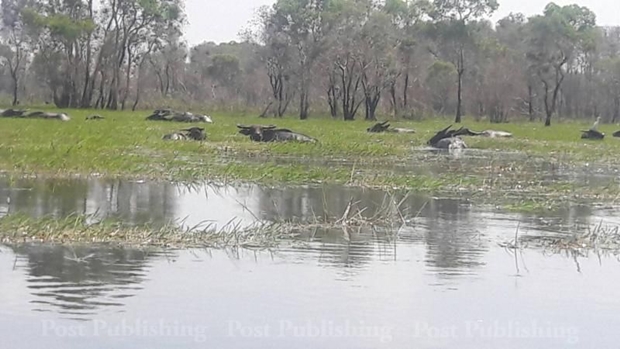 "I moved them back to eat grass at Thale Noi. I lost one buffalo to illness as it had stayed for too long in the water. Many more would have died if I had not moved them out of the water in time," he said.

Like Mr Somyot, other farmers at Thale Noi wetlands are now bringing their water buffalo back, as it is a bountiful source of food for them.

Buffaloes usually enjoy wading in water to find grass in wetlands. The owners let them roam about freely there during the dry season and move them back to land in the rainy season.

However, heavy rains and flooding this year resulted in a shortage of dry land.

The Department of Livestock was in charge of finding dry areas to place the evacuated animals.

Many agencies worked together with locals to quickly move the buffaloes out of the wetlands, racing against time as water levels quickly increased.

However, the department denied media reports that at least 30 water buffaloes drowned during the evacuation, insisting that they died from illness.

Narong Suttisung, the provincial livestock chief in Phatthalung, said 184 of 2,300 water buffaloes living in Thale Noi died of illness, of which eight died of babesiosis, a rare but fatal tick-borne disease usually found in cows. This is the first time it was found in buffaloes.

The water buffalo is important for locals living near wetlands as it generates at least 200,000 baht per year per family.