In most-watched US television event of the year, a political message of unity, reconciliation & ethnic-racial inclusion televised to American public with dance.

Lady Gaga lit up the Super Bowl halftime show in the US on Monday with a message of unity and reconciliation for America.

The US has been suffering from political tensions and polarization recently much like Thailand suffered during the eight years of street protests from 2006 to 2014.

Lady Gaga's show brought with it a message of inclusion for the multi-ethnic and multi-racial country that the US is, with everyone, whether Swedish-American or Thai-American or Iranian-American or American of any origin, having an equal claim to being American.

The video below has highlights from the show. For the full show see the bottom of page.

Lady Gaga dazzled the crowd with a high-tech, tightly choreographed halftime show celebrating American diversity and unity. A halftime show is a musical or dance performance given during the brief period between the first and second halves of a sporting event such as football.

The Superbowl is usually the most watched US television event of the year. It is the national championship game of American football and the Superbowl halftime show is the highlight of the event and millions of dollars are spent to prepare the show. 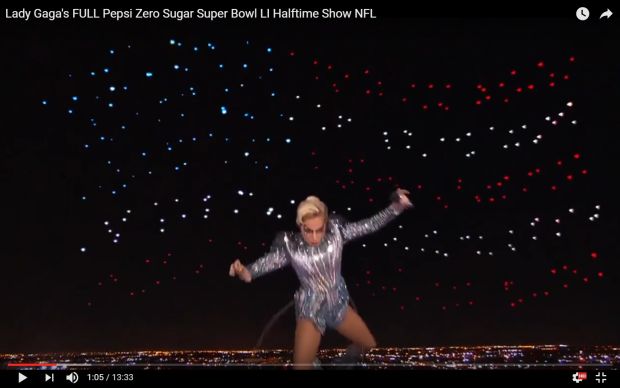 Lady Gaga jumps from the lip of the stadium as drones hover above her in the shape and colours of the American flag. (Source: YouTube screen capture)

The pop diva Lady Gaga electrified NRG Stadium in Houston with a pulsating medley of her greatest hits.

From the outset, Gaga served notice this was no ordinary halftime show.

She began her performance from high up on the edge or lip of the stadium.

An army of 300 drones formed a twinkling American flag in the sky.

Then she took flight.

The singer, clad in a sparkling silver bodysuit and knee high boots, leapt from the edge of the retractable roof onto the stage with the help of some sturdy wires.

The performance was nonstop from there. 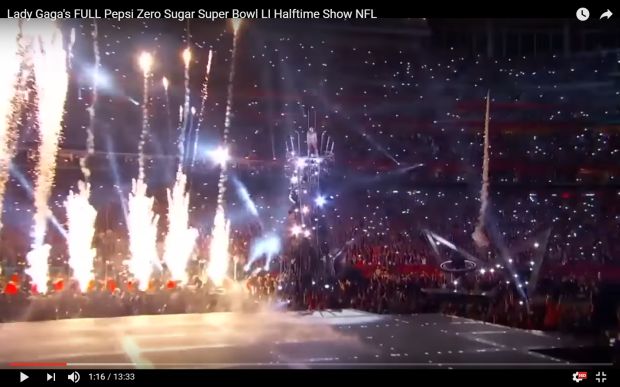 Fireworks shoot off as Lady Gaga lands on a tower in the middle of the stadium.

WOULD SHE RIP INTO PRESIDENT TRUMP, OR NOT?

Ahead of the show, all eyes were on Lady Gaga to see whether she would use the platform to rip into President Donald Trump at a tense time in US politics.

Even with Vice President Mike Pence in attendance at the Superbowl, Lady Gaga -- a sworn foe of Trump -- kept with the game's guidelines to steer clear of overt politics.

Instead the singer, known for her audacious outfits, delivered what seemed to be a more subtle message.

"We're here to make you feel good," she said. 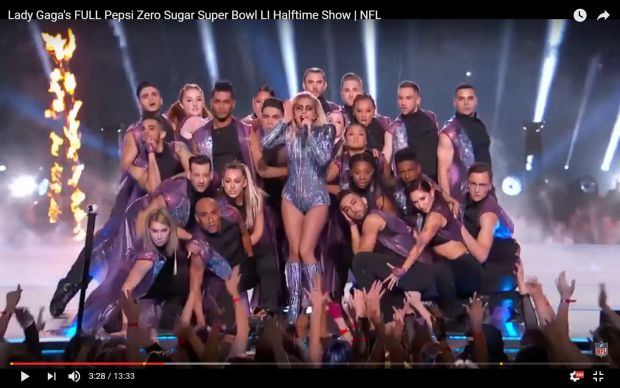 Lady Gaga with her dancers.

ALTERNATIVE US NATIONAL ANTHEM: THIS LAND IS YOUR LAND

She opened with "This Land is Your Land," the anthem by leftist legendary American folk singer Woody Guthrie.

The song has come to be seen as an alternative national anthem for the United States.

Gaga then mixed up her biggest songs -- from "Let's Dance" and "Poker Face" to "Born This Way".

"Born This Way" is an anthem of inclusion in which she speaks of acceptance of people regardless of their ethnicity or sexual orientation. 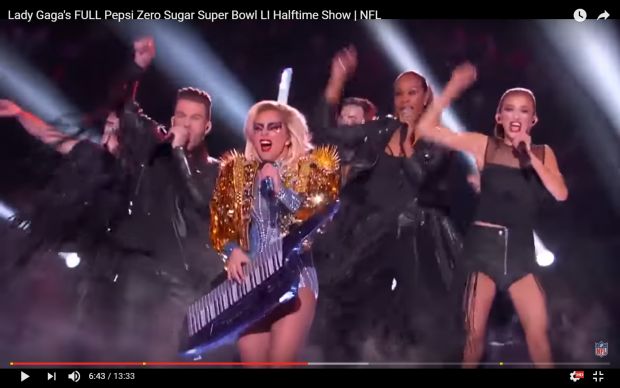 TIME FOR A GROUP HUG

She was backed up by an upbeat, ethnically diverse cast of dancers.

At one point during the performance the dancers all joined in a so-called "group hug".

A "group hug" is when a group of people all join together to hug each other and is used to create a feeling of unity and cohesion in a group.

"No matter gay, straight or bi... You're Lebanese / You're orient," she sang.

"Whether life's disabilities left you outcast, bullied or teased / Rejoice and love yourself today!" 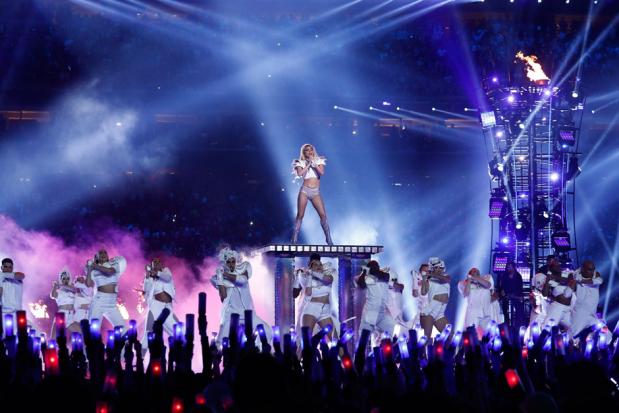 STRIPPED OFF HER DRESS TO REVEAL HOT PANTS

With just 13 minutes at her disposal, Gaga could not pull off many changes of costume.

By the end, though, she had stripped off her metallic dress to perform in hot pants, football shoulder pads -- and stiletto-heeled boots.

"Hot pants" are extremely short pants made often in expensive fabrics such as velvet or silk and worn more as a fashion statement than practical everyday clothing.

Lady Gaga even changed her makeup during the performance, using peel off crystals to alter her look to match her choice of song.

Her dancers also switched outfits during the performance from flashy club attire to placid white clothes.

Lady Gaga has long been associated with a sort of oozing sexuality.

But this time, In keeping with her recent theme of family connection, Gaga shouted out to her parents as she sang her recent ballad "Million Reasons" and played the piano.

At the end of the show, Gaga literally dropped the microphone -- and caught a football as fireworks shot into the air. 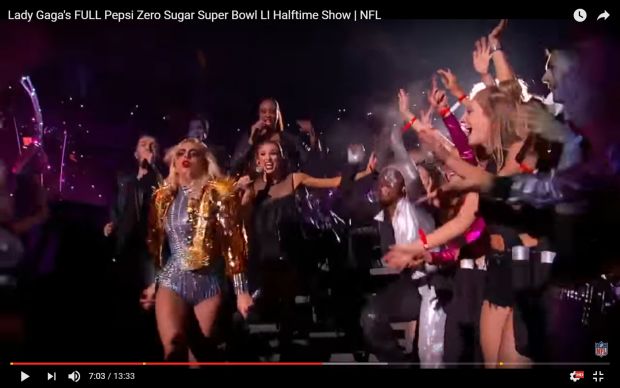 The Super Bowl is the most coveted advertising venue of the year.

The drone army used in the show, designed by chip-maker Intel, ended in another show of Americana -- commercialism forming the logo of sponsor Pepsi with drones in the sky.

Intel described the halftime show as the most elaborate televised use ever of drones.


"The potential for these light show drones is endless," Intel executive Josh Walden said in a statement, saying the company planned to explore more ways to use the technology.

Super Bowl performances are rarely directly provocative, although last year Beyonce startled many by playing her single "Formation." Its video had a message against police brutality.