Japanese Emperor Akihito and Empress Michiko arrived in Thailand yesterday on a private visit to pay their respects to the late King Bhumibol Adulyadej. Photo by KYODO NEWS Bangkok

The imperial couple's plane landed at the Royal Thai Air Force (RTAF) airport at 1.45pm yesterday for their private visit to the country, following their state visit to Vietnam.

The emperor and empress then travelled in a car to the Mandarin Oriental Hotel where they stayed overnight.

At 5.47pm, the imperial couple arrived at the Dusit Maha Prasat Throne Hall inside the Grand Palace. The emperor and empress laid flowers and paid respects to the late King in the throne hall.

They also signed messages of condolence at the Office of His Majesty's Principal Private Secretary inside the Grand Palace.

Japanese Emperor Akihito and Empress Michiko then proceeded to Ambara Villa at the Dusit Palace where they were received by His Majesty the King. The King gave presents to the imperial couple. 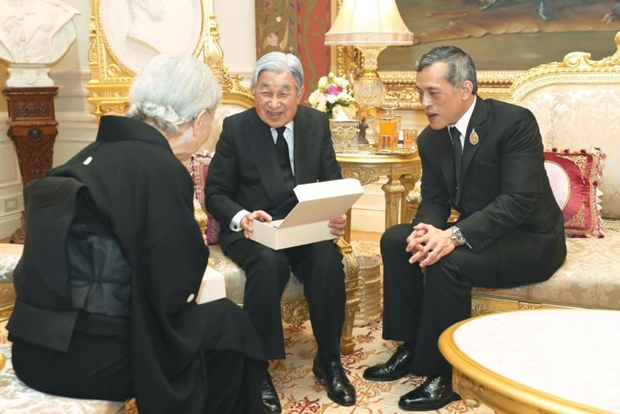 The imperial couple received gifts from His Majesty the King. Photo by KYODO NEWS Bangkok

Emperor Akihito is the first head of state who has been received by His Majesty King Rama X.

Afterwards, the emperor and empress returned to the hotel where they had a private dinner.

The Japanese imperial couple will fly home today. They are scheduled to depart from the RTAF's airport at 11.30am.

The royal families of the two countries have traditionally kept close relations.

The most recent ties date back to Emperor Hirohito's reign when he met King Bhumibol and Her Majesty Queen Sirikit on their 1963 visit to Japan. On the emperor's behalf, the then-crown prince Akihito and princess Michiko visited Thailand the following year.

When Emperor Akihito took the throne in 1989, he chose Thailand as the first destination for his 1991 Southeast Asia tour. The emperor's most recent trip to Thailand took place in 2006, marking the 60th anniversary of King Bhumibol's accession to the throne. Several royal families from around the world also attended.