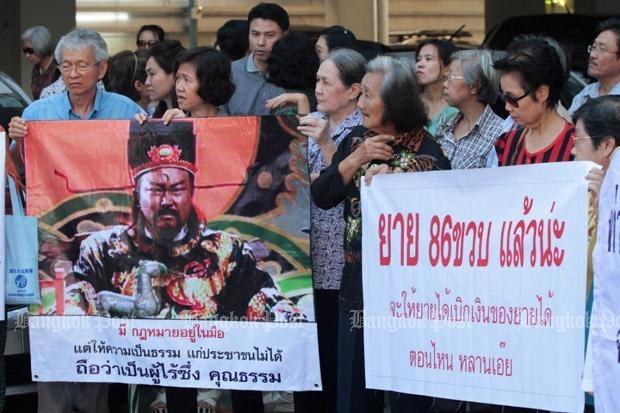 About 100 victims of the Klongchan Credit Union Cooperative embezzlement rally outside the Cooperative Auditing Department in 2015 to demand legal action and repayment. A demonstrator holds a banner reading she is already 86 years old and doubts when she will ever be repaid. (Photo by Pawat Laopaisarntaksin)

Klongchan Credit Union was bankrupted by a former chairman who was also treasurer to Dhammakaya Temple and who embezzled huge sums that he handed over to the temple as "donations".

Klongchan Credit Union is a financial institution but it is not a bank and that is the problem.

The Credit Union will need some 26 years to fully repay its embezzled members.

Unlike Thai banks whose depositors are protected by deposit insurance and strict auditing by bank examiners, credit union members are just another group of creditors waiting in line to get their money back from the failed (bankrupt, insolvent) credit union.

26 YEARS NEEDED TO REGAIN WHAT WAS LOST TO EMBEZZLEMENT

The timeframe for repayment of 26 years is based on the rehabilitation plan for the credit union.

The rehab plan involves borrowing money to set up an investment fund and eventually repay the money to the credit union members, although many older members may not even be alive by then.

This is based on information from Phichest Wiriyaphaha, director-general of the Thai government's Cooperative Promotion Department.

Hopefully, there will not be another crooked chairman embezzling funds in the credit union's future.

BAILOUT TURNED DOWN BY STATE BANKS

Earlier, Klongchan planned to borrow from the Bank for Agriculture and Agricultural Cooperatives (BAAC) and the Government Savings Bank (GSB) but both state-owned banks turned it down.

The banks claimed that if they loaned the insolvent credit union money, they would need to set aside 100% loan-loss provisions because of the insolvency.

WILL BORROW FROM OTHER COOPERATIVES THAT ARE ALSO CREDITORS

Although it may seem a little strange and convoluted, Klongchan Credit Union will borrow money from other cooperatives that are already its creditors.

If successful, it is projected that the investment fund should yield a profit of about 450 million baht a year.

It had yet to conclude how much other cooperatives would agree to lend.

Hopefully, the lending cooperatives will put in place some solid auditing mechanisms to prevent another tragedy.

In March last year, a court order was issued for its rehabilitation.

So far, 1.2 billion baht has been repaid to its creditors.

Klongchan Credit Union has about 1 billion baht left in its accounts and some assets.

The 72-year-old monk allegedly received multi-million-baht so-called "donations" from the former management of the cooperative.

The ex-chairman of the credit union who is already in jail was also a former treasurer of the temple, a clear potential conflict of interest and a disaster that was waiting to happen.

Security forces have been laying siege to the temple in Pathum Thani province for nearly a month in order to arrest the fugitive Phra Dhammajayo.

abbot (noun): the head monk at a temple - เจ้าอาวาส

audit : to officially examine the financial records of a company, organisation, or person to see that they are accurate - สอบบัญชี

bankrupt : without enough money to pay what you owe - ล้มละลาย

based on (verb): information or facts used to make a story, calculation, judgement or decision - ตั้งอยู่บน,ยึดเป็นหลัก

conflict of interest : a situation in which someone cannot make a fair decision because they will be affected by the results - ผลประโยชน์ทับซ้อน

consider : to give careful thought to something before making a decision - พิจารณา

cooperative : a business or farm owned and run by the people involved, with the profits shared by them - สมาคมสหกรณ์

credit union : an organization that is run like a bank but run by members who can obtain loans from their combined savings; a savings and loan cooperative - สหกรณ์ออมทรัพย์, สถาบันการเงินเครดิตยูเนียน

creditor : someone who money is owed to - เจ้าหนี้

deposit insurance : a system that ensures that the pay the depositors at a bank if the bank fails, this creates confidence and stability in a banking system -

embezzle : to secretly take money that is in your care or that belongs to an organisation or business you work for - ยักยอกเงิน, ฉ้อโกงเงิน

fugitive (noun): someone who has been accused of doing something illegal and is trying to avoid being caught by the police - ผู้หลบหนี

fund (noun): investment fund, money collected together to invest in companies or projects -

in order to (prep): to cause something, to make something happen - เพื่อ, เพื่อที่จะ

insolvency : not having enough money to pay what you owe - ซึ่งล้มละลาย

insolvent : not having enough money to pay what you owe - ซึ่งล้มละลาย

investment (noun): the act of investing money in something - การลงทุน

loan : to lend something to somebody, especially money - ให้กู้

management : the people who run and control a business or similar organisation - คณะผู้บริหาร

potential : possible in the future - ที่อาจเป็นไปได้

profit : money that you make from selling goods and services after all your costs have been paid - กำไร

promotion : activities done in order to increase the attendance at an event or sales of a product or service - การส่งเสริม

provision : a part of an agreement or law that deals with a particular problem - มาตรา, บทบัญญัติ,

provisions (noun): an amount of money kept to deal with problems and expenses in the future; accounting provisions -

rehab : rehabilitation; the process of returning someone or something to a good or healthy condition, state or way of living - การทำให้กลับสู่สภาพเดิม, การทำให้กลับมาดีเหมือนเดิม

repay : to pay back the money that you have borrowed from somebody - จ่ายเงินคืน, ใช้เงินคืน

repayment (noun): the act of paying back money that you have borrowed from a bank, etc - การชำระคืน, การจ่ายเงินคืน

resurrect : to bring back into use something that had disappeared, died or been forgotten - ทำให้คืนชีพ, ทำให้ฟื้นขึ้นจากความตาย

set aside : to keep or save something from a larger amount or supply in order to use it later for a particular purpose - สำรอง

set up : to create something or start it - ตั้งขึ้น

so-called : said to be something but which may not be true - ที่เป็นที่รู้กัน (ซึ่งบางครั้งอาจไม่เป็นจริงก็ได้)

tragedy : a very sad event that causes people to suffer or die - โศกนาฏกรรม