Unwanted spirit houses dumped by side of a road

A local motorcyclist keeps to the far side of the road as he passes this discarded old spirit house. (Photos by Chudate Seehawong)

Villagers in Chai Nat say more than 500 dilapidated spirit houses have been dumped near a large tree at the side of a road, horrifying people who pass the spot at night.

CHAI NAT – An unsightly pile of discarded broken and unwanted spirit houses, shrines and various kinds of spirit dolls on the side of a rural road in Sankhaburi district has local residents up in arms.

The intolerable eyesore is along the road between Sankhaburi district and Khai Bang Rachan district in neighbouring Sing Buri.

Residents of Moo 6 village in tambon Pho Ngam asked local media to help convey their complaint to the provincial office of rural roads.

They said more than 500 dilapidated spirit houses have been dumped on a growing pile of debris near a large tree at a curve between kilometre markers 24-25 on rural road No 4050. 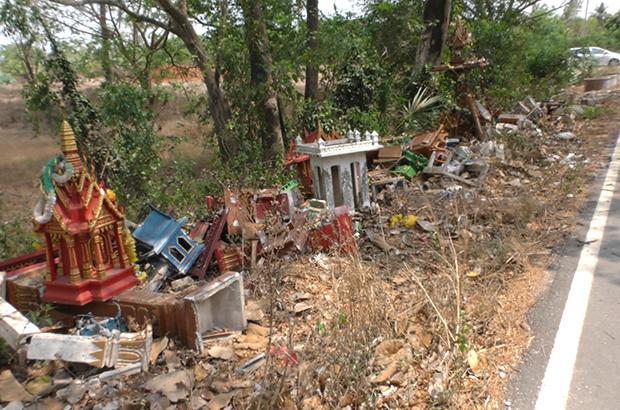 Broken and unwanted spirit houses and dolls left on the roadside in Sankhaburi district, Chai Nat.

Not only is it an ugly blight on the landscape, its mere presence horrifies many people, especially when they have to pass it at night.

Chayaboon Jaemsiri, director of the Chai Nat rural road office, admitted he had received complaints about the spot from the local community.

He would send officials to examine the site this week. A work gang would later be sent there with a dump truck to remove the debris and make the site clean and tidy.