Suthin "We believe we will have a higher chance to nab them (during Songkran)."

During Songkran, CSD policemen who travel to visit their families upcountry are required to look for criminal suspects wanted on arrest warrants in their neighbourhood.

A picture of people flocking back to their home provinces to celebrate Songkran with their families next week has given the Crime Suppression Division (CSD) a fresh idea to keep the criminals at bay.

During Songkran, CSD policemen who travel to visit their families upcountry are required to look for criminal suspects wanted on arrest warrants in their neighbourhood as part of efforts to clear a mountain of warrants, CSD chief Pol Maj Gen Suthin Subphuang told the Bangkok Post.

Like other travellers, criminal suspects also want to see their loved ones and Songkran might encourage them to leave their hideouts to meet families and friends, the officer said.

In this festival of happiness, "we believe we will have a higher chance to nab them," Pol Maj Gen Suthin said.

It is also a chance for CSD police to show their capabilities.

Police said 177,768 warrants are outstanding around the country from serious crimes to minor offences. 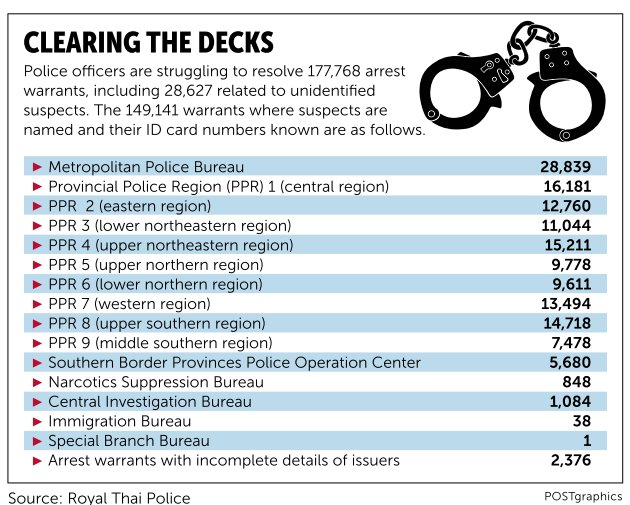 The large number of warrants has caused frustration as cases are often left unsolved.

Eventually the public will bear the brunt of the police workload.

The CSD is not the sole police agency which can carry out the mai chap klap ban mission. Other police units can keep an eye out for suspects wanted on warrants when they return home during the Songkran festival.

However, while officers of the Metropolitan Police Bureau, which oversees Bangkok, are not allowed to ask for days off during the long holidays, it is a vacation time for many CSD officers.

The CSD does not want its officers to overachieve in this mission. They are only required to exercise observations, looking out for suspects travelling to same villages as theirs.

However, this mission is another opportunity to reduce the number of arrest warrants and, as for some inexperienced police, a chance for them to sharpen their investigation skills, he said.