A perspective of the complete project supplied by the company.

One Bangkok on 104 rai of land in downtown Bangkok slated to become largest private sector property development in Thailand with 2021 & 2025 the first & second stage opening dates.

A gigantic property development project named "One Bangkok" will soon rise up on the 104-rai of land that formerly housed the Suan Lum Night Bazaar on the corner of Witthayu and Rama IV roads, across the street from Lumphini Park.

Liquor tycoon Charoen Sirivadhanabhakdi is developing a new mixed-use project on the site.

The development will be a joint venture by two companies owned by Mr Charoen, TCC Assets (Thailand) Co and Frasers Centrepoint Limited (FCL).

According to the company announcement, One Bangkok will be the largest private sector property development project in Thailand.

The project has an estimated investment value of a least 120 billion baht.

It is promoted as a "new global landmark" with the first components to open in 2021. 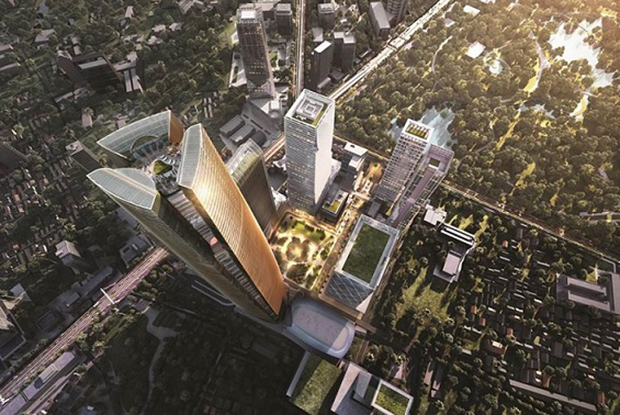 An aerial view with a model of the One Bangkok project. (Supplied photo)

WHAT WILL BE IN THE DEVELOPMENT?

One Bangkok will comprise office buildings and hotels, both luxury and lifestyle hotels.

A comprehensive array of retail and leisure offerings within differentiated precincts, ultra- luxury residential towers, a rich variety of civic areas as well as art and culture facilities will be included.

Fifty rai of greenery and open space will also be included out of the total land area of 104 rai.

TCC Group secured the lease to the land from the Crown Property Bureau in 2014.

The site was home to the old Suan Lum Night Bazaar from 2001 to 2011. The market was shut down after its lease expired.

Mr Charoen, chairman of TCC Group and FCL, said the fundamental aim in the planning and design of One Bangkok was to enhance Bangkok’s stature as a key gateway city in Asia.

Panote Sirivadhanabhakdi, group CEO of FCL, said One Bangkok aims to attract top-level local and multinational companies to set up their AEC corporate headquarters in the district as Bangkok’s most prestigious corporate address.

PROJECT TO BE COMPLETE BY 2025

Su Lin Soon, chief executive officer (CEO) of One Bangkok, said all components should be completed by 2025.

More than 60,000 people were expected to work and live at One Bangkok, she said.