Govt allows six riders in a pickup – for now

Revellers on a pickup truck are ambushed with roadside water splashes on the Bang Kruai-Sai Noi Road in Nonthaburi two years ago. Government spokesman Lt Gen Sansern Kaewkamnerd says they will have one more chance this year to celebrate in this way. CHANAT KATANYU

A pickup truck can carry up to six people in its cab and bed, the government spokesman said on Thursday in an attempt to clear the confusion over the relaxed safety rule.

Sansern: Pickup can carry up to six in bed, cab

A pickup truck can carry up to six people in its cab and bed, the government spokesman said on Thursday in an attempt to clear the confusion over the relaxed safety rule.

Wednesday was the D-day for enforcing the National Council for Peace and Order (NCPO) order banning sitting in the cab or the space behind the front seats and the beds of pickup trucks.

But after the new rule met with strong criticism and opposition from the public ahead of the water festival, the government decided to back down by temporarily relaxing the enforcement of the rule in the evening.

Lt Gen Sansern said the government aimed to ensure safety for the public, especially during the upcoming Songkran holidays, when it stepped up enforcement of the law barring people from sitting in the cabs and beds of pickup trucks and requiring all passengers in almost all types of vehicle fasten their seat belts.

He said since many people were not ready for the new rules, the government would allow some adjustment time.

The government will for now allow up to six people to sit in the space behind the front seats and the bed of a pickup truck. No one will be allowed to sit on pickup bed rails.

Meanwhile, a vehicle driver and front-seat passenger have to fasten seat belts but those in the back seats will only get a verbal warning if they fail to do so.

Lt Gen Sansern’s statement was different from what deputy police chief Detnarong Sutthichanbancha said on Wednesday. The police general said the government had not set the maximum number of passengers to sit in pickup beds. 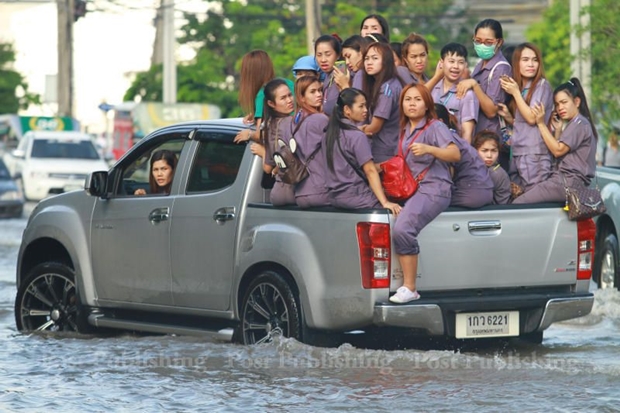 Company employees huddle together in a pickup truck as it trundles along a flooded road in Bang Poo estate in Samut Prakan. You might expect that there will be exceptions for the new rule during flood or emergency situations. SOMCHAI POOMLARD

Before the U-turn by the government, many people have vented their anger in social media.

Some say policymakers did not understand the poor and the culture of Thai people who normally travelled in pickup trucks to their hometowns in the provinces during the Songkran festival.

Some suggested the government get tough on other traffic laws such as arresting those who drove in the wrong direction as it was more likely to cause accidents.

A few small contractors complained that the new rules would severely affect their businesses as they had only a pickup truck to transport workers and construction materials to work sites.

But others support the policy, saying that it would help reduce road accident fatalities.