Garbage islands: Another discovered in Gulf of Thailand

Garbage islands: Another discovered in Gulf of Thailand

PRACHUAP KHIRI KHAN - A floating garbage island has been found in the Gulf of Thailand off Bang Saphan district in Prachuap Khiri Khan.

Snorkellers snorkeling off the island Koh Talu in the district on Sunday reported the floating trash on top of the ocean moving towards the island of Koh Talu to Siam Marine Rehabilitation Foundation.

The garbage included plastic bags, bottles and foam boxes and was about one kilometre long. Besides being unpleasant to see and swim in, the garbage could damage shallow coral reefs around the island and pollute the island if it washes up on the island's beaches.

The latest floating garbage to be found is the second trash slick to be found in the province after the previous one was detected in February.

GARBAGE FROM FLOODING IN SOUTH

Authorities said the trash two months ago could be debris flowing into the sea from the heavy floods in southern provinces.

It took about 10 days to remove the first garbage island from the sea.

SPEED BOATS SENT OUT TO FIND THE GARBAGE ISLAND 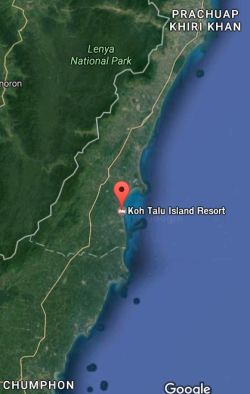 The foundation alerted the Marine and Coastal Resources Department.

The department sent speed boats to locate the trash.

The trash is currently being collected and removed from the sea.

Back in 2012, the web magazine Vice sailed to the North Pacific to investigate the so-called Great Pacific Garbage Patch.

This is "a mythical, Texas-sized island made entirely of our trash" much greater in size than the tiny garbage islands found floating in the Gulf of Thailand.

Below are the videos of their voyage to find the gigantic garbage island: