Cassini's 'grand finale' begins with a dive through Saturn's rings

Artist's concept of Cassini diving between Saturn and its innermost ring. NASA

An unmanned NASA spacecraft, Cassini, is ready to plunge into the gap between Saturn and its rings, the 'grand finale' to a pioneering journey that could offer an unprecedented view of the sixth planet from the Sun.

Miami, April 25, 2017, AFP – An unmanned NASA spacecraft, Cassini, is poised to plunge into the gap between Saturn and its rings, a pioneering journey that could offer an unprecedented view of the sixth planet from the Sun.

The first of the spaceship's 22 deep dives between Saturn and its innermost ring is scheduled for April 26 at 0900 GMT, NASA said.

Then comes a nail-biting wait.

Communications with the spacecraft will go dark during the dive and for about a day afterward, while it makes scientific observations of the planet.

If Cassini survives the trip, it could make radio contact with Earth as early as 0705 GMT on April 27.

"Images and other data are expected to begin flowing in shortly after communication is established," NASA said.

Cassini is running low on fuel, and will make a death plunge into Saturn's surface on September 15.

The decision to end the mission was made in 2010, to avoid damaging moons like Enceladus, which could be explored for signs of life in the future.

Venturing between the planet and its rings for the first time represents "a dangerous moment for the mission," Luciano Iess, Cassini team member at Italy's Sapienza University of Rome, said at a meeting of the European Geosciences Union in Vienna.

Skimming Saturn at an altitude of about 3,000 kilometers, the spacecraft will be closer than ever to the band of ice and space rocks that circle Saturn.

The debris move at a speed of about 109,000 kilometers per hour. 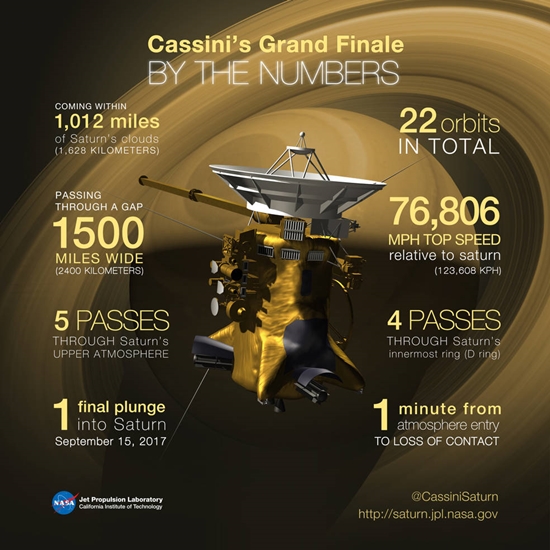 The rings around Saturn – a gas giant that is second in size in our solar system only to Jupiter – are thousands of kilometers wide, but only nine to 90 meters deep.

The spacecraft's final dives aim to offer a fresh look at the rings, potentially revealing more about their mass and whether they are old or new.

"If the rings are massive, this means that they are old. They can date back to the formation of the Saturnian system," Iess said.

"If the mass is small, then the rings are young and they have been formed by a different process."