Phetchaburi roadside stall made its name with solar-cooked chicken, saves on electricity but have to eat dinner before sun goes down.

For 20 years the owner of this small roadside restaurant, Sila Sutharat, has grilled chicken and pork using only the power of sunlight.

His solar cooker is a reflecting panel fitted with hundreds of small mirrors - an idea he says he came up with by himself.

Long ago, he grilled his chicken and pork over a charcoal fire, like most other vendors.

And then, one day in 1997, he was sitting at his stall and watching buses and other vehicles pass by his food stall.

It occurred to him how hot he felt when the glass windows on the vehicles reflected sunlight directly at him.

He began experimenting, placing mirrors on a panel, trying to reflect the sunlight onto a small area.

ONE HUNDRED MIRRORS FOCUS SUNLIGHT ON THE CHICKEN

Then he built a curved iron frame and attached about 1,000 3x5 inch mirrors to it.

The panel and mirrors are adjusted to focus the sunlight on the frame on which chicken and pork are grilled. AT 312 DEGREES CENTIGRADE, 12 MINUTES TO COOK A CHICKEN

It can cook a 1.2 kilogramme chicken in just 12 minutes.

The roasted meat sends out a savoury smell and its skin is crispy. 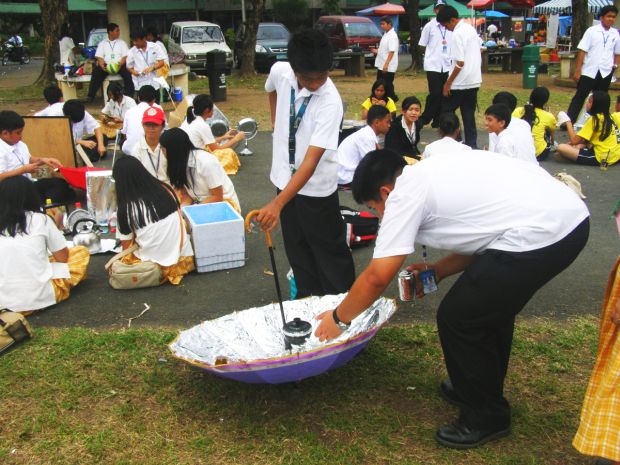 Students cooking with umbrellas at a science fair (Source: Wikipedia)

SUNLIGHT COSTS NOTHING, NON-POLLUTING, BUT CAN'T GRILL AT NIGHT

And the best part is, sunlight costs nothing.

The simple technology is completely sustainable and clean - unlike fossil fuels or natural gas or charcoal and coal, which are all costly, pollute the air and are natural resources that are being depleted and slowly becoming scarce.

Phetchaburi Rajabhat University has acknowledged his wisdom and awarded him an honorary degree in science.

And his children are very proud of him. 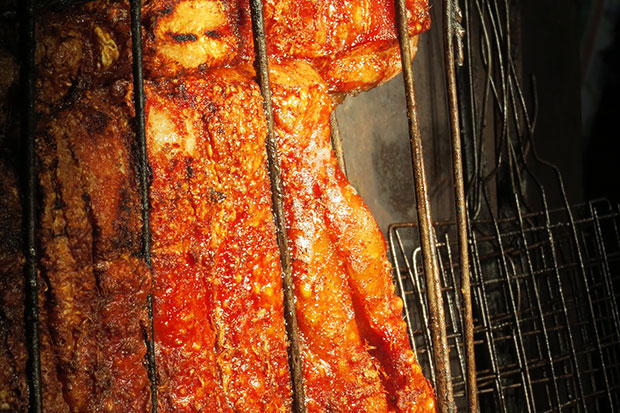 Click "play" to listen to Sun-cooked chicken: Roadside dining for 20 years and "Download" to keep this file for educational purpose.

acknowledge : to accept or admit that something exists, is true or is real - ยอมรับ

adjust : to change something slightly, especially to make it more correct, effective, or suitable - ปรับ

attraction : something that creates interest and brings people to see it - การดึงดูดความสนใจ

came up with : suggested or thought of an idea or plan - คิดขึ้นมา

charcoal : a black substance made from burnt wood - ถ่าน

crispy : food that is a little bit hard to bite, that makes a sound when you bite it - กรอบ

deplete : to reduce something by a large amount so that there is not enough left - ทำให้หมดสิ้นหรือลดน้อยลงมาก

experiment : to try or test new ideas, methods, etc. to find out what effect they have - ทดลอง

focus (verb): to aim onto a particular point - เล็ง, เพ่ง

fossil fuel : a fuel such as oil or coal made from decayed material from plants and animals that lived thousands of years ago -

frame (noun): a structure of plastic or metal that holds the lenses in a pair of glasses - กรอบแว่นตา

grill : to cook something by direct heat, especially under a very hot surface in a cooker - ย่าง

honorary degree : a degree given to honour someone, although they have not earned it the usual way - ปริญญากิตติมศักดิ์

it occurred to him : he thought of something good; he solved a problem -

junction : a place where roads, lines, etc., join or cross each other - สี่แยก

mirror : a piece of glass that you can see yourself in - กระจก

natural resources (noun): things such as water, coal, trees, wildlife and oil that exist in nature and can be used by people - ทรัพยากรธรรมชาติ

panel (noun): a flat piece of metal, wood, glass or other material that forms part of something such as a door, wall or solar equipment - แผ่นกระดานสี่เหลี่ยม, ไม้กระดานที่ใช้ปิดผนัง

place : to put something in a particular place - วาง

pollute (verb): (of water, air, land) to cause to have dirty or harmful substances so that it is no longer pleasant or safe to use - ทำให้เป็นมลพิษ

proud : feeling pleased and satisfied about something that you own or have done, or are connected with - ภูมิใจ

reflect (verb): to throw back light, heat, sound, etc. from a surface - สะท้อนกลับ,ส่องกลับ

savoury (adj): having a pleasant taste or smell - มีรสชาติ, รสอร่อย

skin : the outside covering of the body - ผิวหนัง

stall : a large table or a small building that is open at the front, used for selling things (or for giving people information) - รถ หรือแผงขายของ

sustainable : able to be successfully continued for a long time - ยั่งยืน, ถาวร

temperature : a measurement of how hot or how cold a place or object is - อุณหภูมิ

wisdom : the knowledge that a society or culture has gained over a long period of time - ปัญญา