Udom Sirisorn, 54, and his wife Daeng, 51, of Non Sa-ard village in Kalasin’s Huai Mek district, arrive at the Kalasin provincial court to hear the Supreme Court’s ruling on Tuesday morning. The court sentenced them to five years in jail each, reducing their terms from 15 years. (Photo by Yongyuth Phupuangphet)

Off to prison for 5 years for elderly couple told to confess to illegal logging to get mercy of the court, reduced from 30 years in prison.

The Supreme Court on Tuesday reduced the prison sentences given a mushroom-picking couple from 15 years to five years each for forest encroachment.

Earlier the elderly couple had been set free pending an appeal of their prison sentence, read previous article here & watch video of their emotional release from prison below.

The imprisonment of of the elderly couple poses a dramatic contrast with mega-wealthy Red Bull heir "Boss Yoovidhya" who has been able to avoid trial and any form of justice for killing a police officer (see here & here).

WHAT EXACTLY HAPPENED SEVEN YEARS AGO?

The elderly couple named Udom and Daeng were arrested on July 12, 2010 after they rode their motorcycle to Dong Ranang National Park to collect wild mushrooms.

In the same area, authorities were moving in on a group of illegal loggers, who got away.

Udom and Daeng also fled in fear upon learning of the raid, leaving behind their motorcycle. 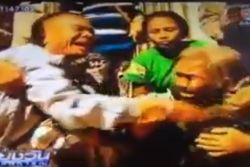 An emotional reunion after a difficult time in prison

Officials found their motorcycle and traced it back to the couple, who were apprehended soon after on charges of illegal logging.

Forestry officials accused them of felling about 700 trees over a 72-rai area of the protected forest.

30 YEARS IN JAIL, HALVED TO 15 YEARS BECAUSE THEY CONFESSED

The sentences were halved after they confessed.

They were released on bail and appealed the ruling.

They insisted they had not felled any trees, and had gone into the forest reserve solely to collect mushrooms.

The case grabbed media headlines after the couple sought justice from several agencies.

The court was widely criticised for its judgement.

The elderly couple had earlier said they confessed to the charges, even though they had done nothing wrong, after being advised by their lawyer and neighbours that doing so would mean the penalty would be reduced and they would not have to spend time in prison.

In Thailand, punishment in criminal cases can be reduced by huge amounts if the accused confesses to the crime they are accused of committing.

Unfortunately, this also sometimes provides an incentive even to those who are innocent and did not commit crimes to confess to a crime to avoid a long time in jail that seems certain

The couple have already spent about 20 months in prison.

Udom Sirisorn, 54, and his wife Daeng, 51, of Non Sa-ard village in Kalasin’s Huai Mek district, arrived at the provincial court to hear the Supreme Court’s ruling on Tuesday morning.

They said they would accept the judgement.

The court reduced the lower courts' sentences to five years in jail each on forest encroachment charges.