Push for robots in Thailand 4.0 planning

Students of King Mongkut’s International Demonstration School operate a robot they developed to be a teaching medium to help make learning science and maths more fun and, very possibly, to ensure themselves a future job. WEERAWONG WONGPREEDEE

According to the Stock Exchange of Thailand, the new company has registered capital of 200 million baht. Some 60 engineers were selected from its factories and companies to join the development.

Meanwhile, CP Group has teamed up with Panyapiwat Institute of Management (PIM) to offer a bachelor of engineering in robotics and automation.

ThaiBev aims to use the robots in its factories in order to boost productivity and efficiency, as well as supply them to other industries to generate income in the future.

ThaiBev said robotics is playing a more significant role in business and industry worldwide, with average demand growth of 10-15% from the industrial sector.

According to the International Federation of Robotics, 2.32 million robots will be used worldwide this year, 41,600 of them in Thailand. The greater adoption of robots is in line with the Thailand 4.0 policy, which is targeting innovation as a means of fostering development. The scheme is focused on six areas: agriculture, service, small and medium-sized enterprises, devices, internet and creative economy. 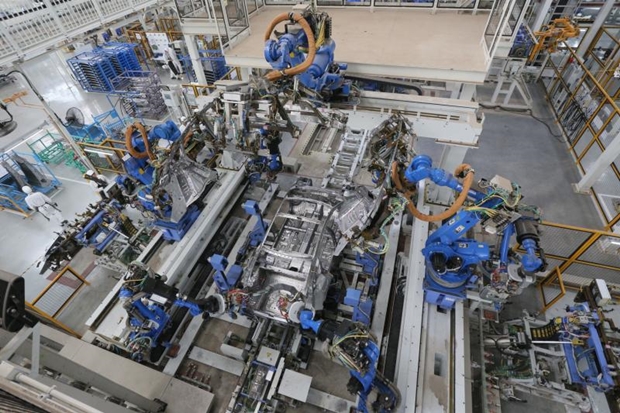 Assoc Prof Sompop Manarungsan, PIM's president, said the institute has welcomed 50 students to study in its engineering and robotics automation programme, which will start this June.

"Robotics is a global trend. Demand for robots will continue to increase, influenced by ageing societies, a shortage of workers and increased productivity and competitiveness globally," said Dr Sompop.

Currently, about 80% of robots are used in the industrial sector and the rest in the service sector.

"Robots may have a slight effect on workers but the latter will also have new employment opportunities, depending on how much we prepare them to be ready for these new sectors," said Dr Sompop.

This includes the company's third factory for Oishi ready-to-drink green tea, which was officially opened last week in Saraburi. The company has invested 2 billion baht in the facility.

"We will use this factory as the springboard to the Northeast, linking up to Laos, Myanmar and Cambodia in the future," he said.

Apart from the Oishi factory, more robots will also be used to make other ThaiBev products, including liquor, beer, drinking water and soda. It is expected to use about 1,000 robots in its network in the future.

"Some ThaiBev factories still rely on semi-automated production systems. The move towards automation won't have an impact on our workers because we do not have a policy to lay them off. Automation will help us double our productivity," said Mr Pisanu.