Flooded roads and heavy traffic is a major inconvenience for pedestrians as well as motorists. (Photos by Patipat Janthong)

It's early in the rainy season, but Bangkok commuters are already fighting through flooded areas of the city and more rain is on the way.

Several major streets were under water, including all of Soi Sukhumvit 33, much of Sukhumvit Soi 22 around Sainampeung School and much of Lat Phrao Road, traffic police said. 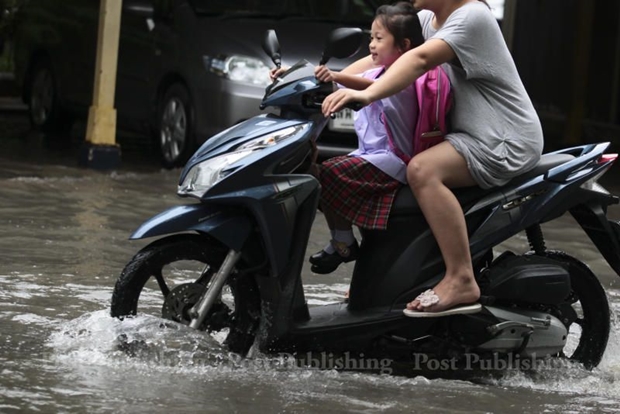 A mother and her daughter ride through a flooded street by to get to school. Many areas of Bangkok were flooded following heavy rain in the early hours.

Motorists reported the water in Soi Ramkhamhaeng 21 came half way up their vehicles' wheels.

The water was so deep in Lat Phrao 64, it was impassable for small vehicles. Pracharat Bamphen Road leading to Ratchadaphisek-Huai Khwang intersection was also flooded, traffic police said.

Traffic was slow on Phahon Yothin Road's inbound lane from Ratchayothin intersection to the entrance to Lat Phrao Road and along flooded Soi Lat Phrao 80. 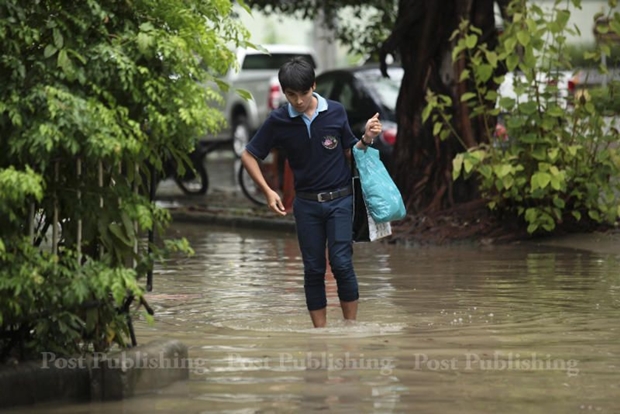 Getting from small sois to the main roads can be a chore.

No relief is in sight, either, as this five-day forecast for the capital region shows.

The Meteorological Department said more heavy rain is forecast for parts of the North and the Central regions until Thursday as an active low pressure cell over the Andaman Sea moves across Myanmar.

Rain is forecast for about 70% of Bangkok and surrounding provinces, with heavy showers in some areas.

According to City Hall's Department of Drainage and Sewerage, 108 millimetres of rain fell on Benchasiri Park in Klong Toey district, 101mm on Klong Samsen in Huai Khwang district, and 94mm on Khlong Saen Saep.

Twitter users said water on several major roads had drained away by 8.30am, but some sois in low-lying areas were still flooded in the aftermath of the storm.