The picture captured from a video by Uber driver Surasak Khukham shows a Pattaya taxi driver standing in front of his vehicle, preventing him leaving.

As tourist husband & wife get into car in Pattaya, five men surround car in threatening manner & block it from leaving. Has also happened to real estate agents mistaken for Uber drivers.

Foreign tourists were forced out of an Uber car by a group of men, allegedly working for a local taxi company, allegedly angry local taxi drivers, who blocked the car from moving.

While the Uber driver, Surasak Kookham, 29, was picking up a foreign tourist couple on Pattaya Sai 2 Road.

The woman entered the car first while the husband was putting the luggage in the trunk.

While this was happening, the car was surrounded by five threatening men (thugs) who blocked the car and prevented it from leaving.

The men ordered the woman to get out of the car.

Frightened, she got out of the car.

Her husband took the luggage out of the car and joined his wife on the sidewalk.

The whole incident was recorded by the owner of the car on video.

The men did not let the car go even after the passenger left, the driver said.

The five men who threatened the driver and tourists were believed to work for a taxi cooperative in the Pattaya beach area. 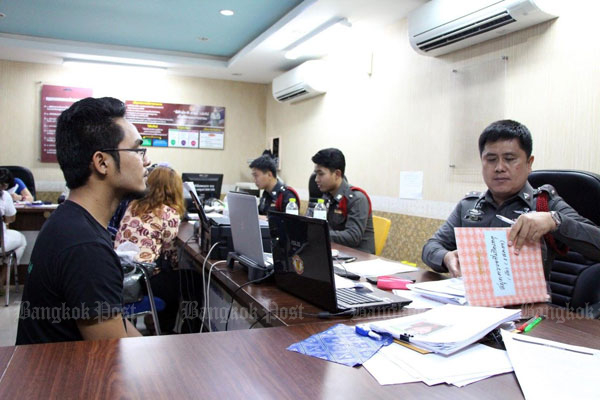 Uber chauffeur Surasak Khukham files a complaint with Pattaya police that his car was blocked and his foreign passenger forcd to leave by a group of local cabbies in the beach resort city. (Photo by Chaiyot Pupattanapong)

The men seemed undeterred by warnings from Pattaya police not to take action themselves against Uber cars they view as stealing passengers from them.

A similar, highly publicised incident occurred earlier this month in Pattaya, when a real estate agent carrying three Chinese clients in her car was chased and stopped by about 20 threatening men, allegedly local taxi drivers from the Loma taxi cooperative.

They had mistakenly thought the real estate agent was an Uber driver with passengers.

UBER'S RISE IN POPULARITY AMONG THOSE FED UP BY TAXI PROBLEMS

The California-based Uber company has expanded its service into Thailand, with Uber drivers using their private cars to carry passengers.

Technically, the ride- sharing service is illegal because the cars are not registered for public transport, but it has become popular with passengers fed up with being rejected by impolite taxi drivers.

Uber puts all drivers through a background check before they are allowed to work with the company and passengers, and whether the taxi driver is rude or not can be reported by passengers on the Uber app.

WHAT TO DO ABOUT VIGILANTE TAXI DRIVERS?

Uber drivers in Pattaya said it is a way to earn much-needed extra income, but the latest incident of vigilante intimidation made them fearful of working.

They want Uber and the government to come to an agreement and solve the problem.

They play down officials' expressed concern over possible risks faced by passengers because their cars are not registered as public vehicles under the state supervision.

The Uber app itself provides a greater level of customer feedback and supervision than the existing government system.