As long as focus is on smartest students in a few select schools, educational inequality & low test scores for the country overall will be the result.

Politicians, policymakers and the public have all recently given much attention to the government's Thailand 4.0 economic model.

Thailand 4.0 aims to make the country ready for a digital economy.

However, there remains a range of challenges that will impede the realization of this lofty goal.

Among the challenges are the overall quality of Thailand's education, which is below the global average, as well as the growing inequality in the education system... 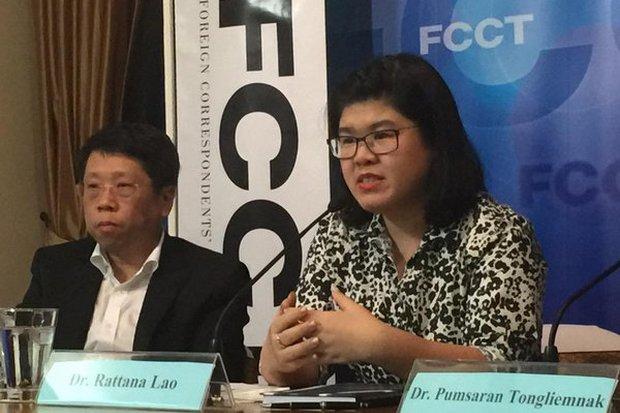 Rattana Lao is the Head of the Thai Studies International Program, Pridi Banomyong International College Thammasat University. She is also an author of A Critical Study of Thailand's Higher Education Reforms: The Culture of Borrowing. (Photo via Twitter/nanchanokw)

How can our education system prepare our students to become skilled and competitive workers?

How can this be achieved for all students rather than focusing on promoting the "brightest students" from a few select schools?

HUGE SPENDING ON EDUCATION, SO THE RESOURCES ARE THERE

It is not that Thailand does not have the resources needed to achieve across the board educational excellence.

Thailand has, in fact, spent massive amounts of money on education.

The government, for example, spent 19.35% of its annual 2.58-trillion-baht budget in 2015 on education -- the largest portion of any item in the budget.

Unfortunately, the huge spending has not translated into improved learning.

The students of Thailand still scored below global averages in key subjects in various international tests.

These test scores show that Thai students are still behind their peers in neighbouring countries when it comes to their performance in maths, science and English.

In the latest Programme for International Student Assessment (PISA) score results in 2016, Thailand is ranked 55th out of 72 countries in the overall results.

In maths and science, Thailand is ranked 54th, and 57th for reading...

HOW THE MONEY SPENT IS USED

..."It is not the amount of money that we are lacking, it is how the money is not efficiently and effectively spent -- this is the problem," said Pumsaran Tongliamnark, a policy analyst from the Budget Bureau, Ministry of Education, speaking at a recent seminar.

While the test results reflect the shortcomings of Thailand's education system, the most worrying aspect of this debacle is the grave inequality that persists at every level of the education system.

Thailand is caught in an education paradox -- should the country focus on pushing the best and brightest students to compete on the world stage?

Or should we be concerned with those who are falling behind?

Is it possible for Thailand to achieve both goals?

Before talking about the digital economy and the fourth industrial revolution, let's get the foundations straight. The elephant in the room is the issue of inequality in our education system.

The problem of inequality is more pressing for small primary schools and secondary schools.

Each small school has less than 20 students in each grade, in rural areas.

There are 15,224 schools that fit into this category.

Although the number of small schools has declined by more than 20% since 1993, they continue to be the majority of schools.

Small schools lack both sufficient state funding as well as the teachers needed to increase the quality of teaching and the performance of students.

Often, one teacher has to teach multiple subjects....

...students from small schools achieved lower scores than their peers from larger schools.

The 2012 international PISA scores revealed that there were greater improvements in scores among students from schools in big cities than those from small schools in small cities.

Big city schools improved at the rate of 21.3% from the last test.

Small city schools fell behind with only a 16.1% improvement.

IF YOU ARE RICH, JUST SEND YOUR KID TO AN INTERNATIONAL SCHOOL

An observation by Stephen Holroyd, the principal of the international school Shrewsbury International School in Bangkok, is more compelling.

While the country laments the tragedy of Thai educational performance, the growing sector of international elite schools in Thailand is "isolated" and insulated from the problem, said Mr Holroyd.

Year after year, these elite schools continue to send their best and brightest affluent students to expensive Oxbridge and Ivy League universities in the UK and the US.

When these internationally educated students come back to Thailand they are better positioned to get the top jobs, not only from the higher quality education they received but also by the networks of other elite foreign university students in Thailand.

The problem of education inequality goes beyond basic education.

It transcends to the level of higher education as well.

While the media has reported much on the low ranking of Thailand's top universities compared to international counterparts, a more serious problem lies in the disparity between different educational institutions in the country.

With more than 173 higher education institutions, only a handful of institutions continue to capture the imagination and aspiration of Thailand's top students.

This leaves a huge gap in student quality among different institutions.

While the competitiveness of higher education institutions is important, attention and resources should also be given to lower-ranked ones including Rajabhat universities.

As things stand, the state's budget allocation for limited admission universities is 10 times higher than that given to Rajabhat universities.

The different level of resources that go into different types of universities ultimately creates inequality in students' performance.

THE IDEA OF 'EDUCATION REFORM' HAS BECOME A CLICHE

Thitinan Pongsudhirak, director of the Institute of Security and International Studies at Chulalongkorn University, has pointed out that education reform has become a cliche, but this makes it also imperative.

While education is a challenge in all countries, it has become critical in Thailand.

If reform is not undertaken to better educate the Thai workforce from a young age, Thailand may well enter a period of long-term decline and economic stagnation, he said.

If Thailand is committed to achieving Thailand 4.0, it needs to get the basics right. It needs to give greater and more serious attention to the inequality spanning the education system.