Preeyanuch “Preaw” Nongwangchai, the key suspect in the murder and dismemberment of a karaoke bar worker, is tightly escorted by police as she takes them through the crime, in which Warisara Klinjui was picked up by car before being murdered in Khon Kaen. JAKRAPHAN NATANRI

Three female suspects, including accused killer Preeyanuch "Preaw" Nongwangchai, on Monday led police through a re-enactment of the murder and disposal of the body of karaoke bar worker Warisara Klinjui.

KHON KAEN – Three female suspects, including accused killer Preeyanuch "Preaw" Nongwangchai, on Monday led police through a re-enactment of the murder and disposal of the body of karaoke bar worker Warisara Klinjui.

Ms Preeyanuch, 24, and two accused colluders – Kawinta "Earn" Ratchada, 25, and Apiwan "Jae" Satayabundit, 28 – were taken to eight spots linked to the grisly murder on May 23.

These included the store where they bought a saw, a resort where 22-year-old Warisara was cut up and bagged, and the field where her dismembered body was then buried.

Two companies of police also escorted the trio to an intersection on Nadi road where they picked up Warisara in a car and later drove her to the resort.

"When the suspects realised the victim was dead, they bought the equipment [to dispose of the body] and drove to the resort," he said.

Warisara's dismembered body, stuffed in plastic bags in two plastic containers, was disinterred from a shallow grave on land owned by Ms Preeyanuch in Khon Kaen's Khao Suan Kwang district on May 25.

Ms Preeyanuch and her two companions crossed the border to the Myanmar town of Tachilek, opposite Chiang Rai's Mae Sai district, the same day.

A wall of police kept hundreds of angry villagers at bay during the re-enactment at the grave site.

One woman said she just wanted to see with her own eyes the "beautiful face, but cruel mind". 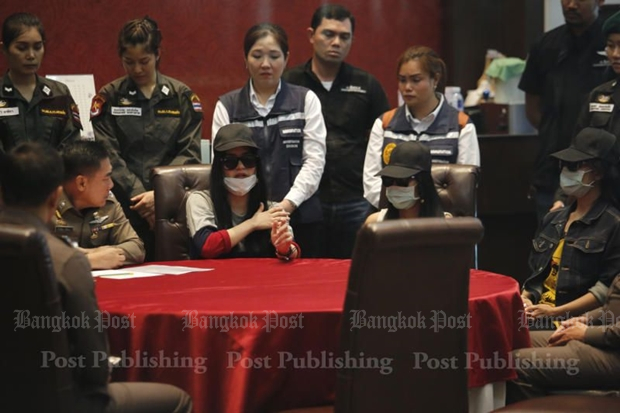 The three female suspects in the karaoke bar girl murder case have confessed to the charges laid against them, with one of the suspects, Preeyanuch "Preaw" Nonwangchai, insisting she had no intention to kill the victim.

Speaking at a press conference Sunday following their arrests, national police chief Chakthip Chaijinda said the death of 22-year-old Warisara Klinjui is not linked to any organised drug ring. A personal feud and an unpaid debt were the motives, he said.

The police called in the media Sunday afternoon in Bangkok, several hours after the arrests of Ms Preeyanuch, 24, Kawita "Earn" Ratchada, 25, and Apiwan "Jae" Sattayabundit, 28, were confirmed on Saturday night. 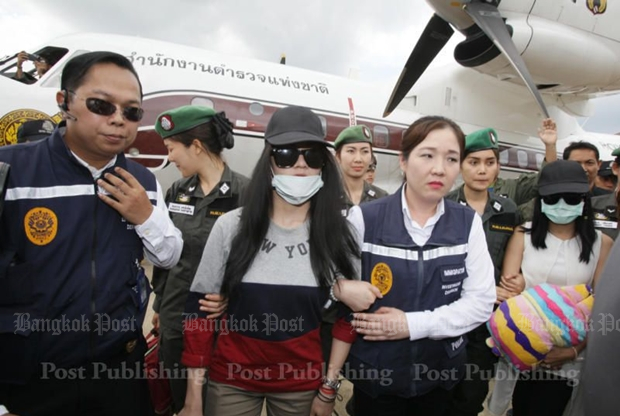 The suspects, formally under arrest, are escorted by immigration officials upon their arrival at Police Aviation 3 at Bangkok's Don Mueang airport on Sunday. APICHIT JINAKUL

The three have been charged with cooperating in premeditated murder, concealing a body and theft. A crime re-enactment is expected to take place Monday at 7-8 locations in Khon Kaen.

The trio are among a group of five who allegedly killed Warisara, dismembered her body and buried the body parts in Khon Kaen's Khao Suan Kwang district late last month. The female trio fled across the border to Tachileik on May 25, the day Warisara's body was discovered.

Two other detained suspects are Wasin Namprom, 25, who was arrested in Laos and his girlfriend Jidarat Promkhun, 21, who was nabbed in Ubon Ratchathani.

Thai authorities sought help from their Myanmar counterparts to hunt down the suspects, who hid in a vacant house in Tachileik. The trio were detained by Myanmar authorities on Saturday night and delivered to the Thai police Sunday morning.

According to Pol Gen Chakthip, who questioned the three suspects by himself for an hour, the suspects have confessed to all the charges and Ms Preeyanuch has implicated Mr Wasin as being involved in the dismembering. 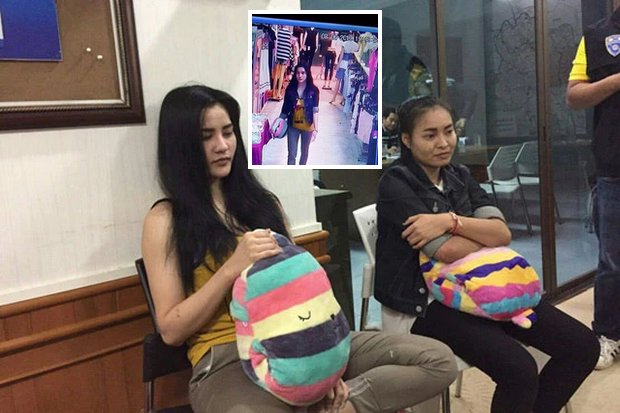 Apparently aware the end was near, the wanted women went shopping in Tachilek for pillows and blankets – where they were instantly spotted on CCTV (inset). (Photo supplied)

Pol Gen Chakthip said Warisara's murder stemmed from a personal conflict as the victim had given police information leading to the arrest of Ms Preeyanuch's husband in a drug-related case. Her husband is now in prison. In addition, Ms Preeyanuch claimed Warisara owed her up to 40,000 baht for more than a year.

Quoting Ms Preeyanuch, the police chief said she had no intention to kill Warisara but wanted to teach the victim a lesson.

"She insisted she met the victim by chance about 1am of May 25 after not having seen her for a year. So she asked her to get into the car to teach her a lesson but they had a row in the car and she strangled the victim in a fit of rage. The victim died in the car.

"The suspects thought about concealing the body by dumping it into the water but knew it would turn up. So they dismembered and buried the body," he said.

According to Pol Gen Chakthip, the suspects contacted authorities to surrender under pressure.

"They gave themselves up to authorities because we put a lot on pressure on this case. We asked Myanmar to help hunt them down. The suspects said they didn't want other people to get in trouble," he said.

"At least they had the conscience to turn themselves in," he said. 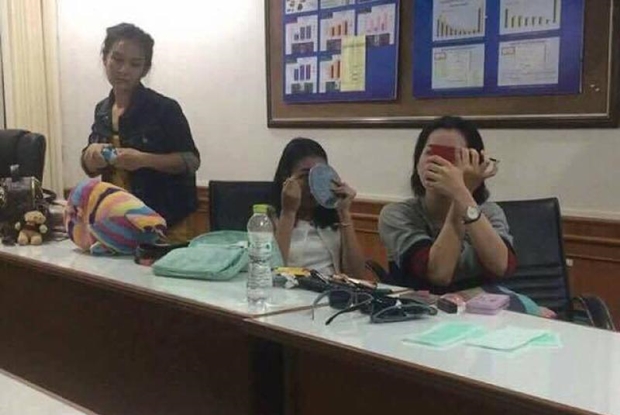 Two of the suspects tend to their make-up to prepare for their appearance before the media. POST TODAY

Commenting on social media calls that the trio faces the death sentence, he said sentencing is a judicial matter and said the harshest penalty in a murder case is death.

Pol Gen Chakthip also defended police treatment of the suspects, who were seen in several photos released on social media as "relaxed" and not handcuffed, saying authorities were confident the suspects would not flee.

He also claimed it was "normal" for police to let female suspects apply make-up while in detention.