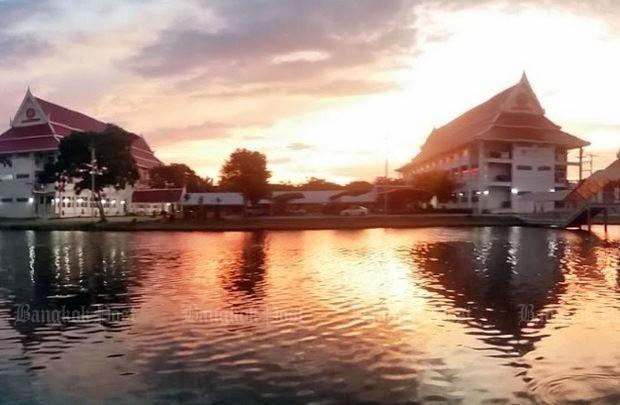 Insiders at the National Office of Buddhism at Phuttha Monthon (above) are allegedly involved in corruption involving 60 million baht at 12 temples. (Photo via Google Maps)

The police Counter - Corruption Division (CCD), an agency under the police Central Investigation Bureau (CIB), will forward the case to the National Anti-Corruption Commission (NACC) this week.

Lack of proper accounting systems, financial procedures, use of banks, auditing and monk accumulation of wealth from temple donations are current ongoing issues of the reform of Buddhism under scrutiny (see here, here, here, & here).

WANTED: FOUR OFFICIALS OF THE NATIONAL OFFICE OF BUDDHISM

The four state officials are said to include a former director-general of the National Office of Buddhism (NOB).

The four officials had reported to answer the charge but the four civilian suspects have not shown up.

This is according to CCD chief Kamol Reanracha.

Police investigators detected alleged irregularities in the transfer of money from the maintenance funds to temples' bank accounts.

After the money was transferred, temples had to return up to 80% of the money to the embezzlement gang. The money returned was referred to as "change" .

This is according to Pol Col Wiwat Chaisangkha, a CCD deputy chief.

For example, if one million baht was transferred to a temple, the temple had to give 800,000 baht in "change" back to the gang, while the temple actually received only 200,000 baht, Pol Col Wiwat said.

It is not clear how they were able to compel the temples to hand over the money.

A source said the NOB allocates between 400 million-500 million baht for maintenance of temples nationwide annually.

12 TEMPLES LOCATED ALL OVER THE COUNTRY, VICTIMS OF FRAUD

A total of 12 temples nationwide are suspected of involvement in embezzlement of maintenance funds worth 60 million baht dispensed by the NOB, according to Pol Maj Gen Kamol.

Of the 12 temples, six are in the North, three in the Northeast, two in the Central Plains region and one in the South.

An investigation was conducted based on an examination of the state budget dispensed to temples across the country during 2012-2016.

A raid was launched last Wednesday as part of the government's first operation to suppress corruption in temples.

FAILED ACTION AGAINST EMBEZZLEMENT IN 2015 AFTER AUDITOR-GENERAL TIP-OFF

The three houses belong to people in the networks allegedly involved in embezzlement.

In 2015, the Office of the Auditor-General tipped off the CCD that it had uncovered corruption at one temple in Phetchaburi.

State officials allegedly pocketed part of maintenance funds allocated to the temple by the NOB.

SUSPECTS ALLERTED TO OPERATION, DID NOT APPEAR AT TEMPLE

However, the CCD at that time failed to arrest them as the accused had been alerted to the operation and did not appear at the temple.

The first group is in the North, Central and South and the second network is based in the North.

The other two networks operate in the Central and Northeastern regions.

MONKS CONSIDERED AS VICTIMS OF FRAUD

The CCD will not take legal action against monks allegedly embroiled in the case as investigators considered them victims of the fraud.

Instead they will be treated as witnesses, Pol Maj Gen Kamol said.

The four officials had been released because the CCD will have to submit an investigation report to the NACC first.

If the anti-graft agency finds there are grounds to the charge, it will send the report back to the prosecution or the CCD for action.

By that time, the officials will have been summoned again and placed in police custody, Pol Maj Gen Kamol said.

The suspects will have the right to seek bail.

NOB director Pongporn Pramsaneh said Sunday that he will meet Prime Minister's Office Minister Ormsin Chivapruck, who oversees the NOB, today to report details of the case and will seek the government guidelines on the matter.

The NOB will wait for the NACC's decision on the case, Pol Lt Gen Pongporn said, adding that any NOB officials found guilty will face disciplinary action.

A police source said the four state officials include a former director-general of the NOB and two officials from that office.

aiding and abetting : the crime of helping other people commit a crime -

allegedly : claimed to have done something wrong, but not yet proven - ที่ถูกกล่าวหา

Auditor-General (noun): a high-ranking government official responsible for auditing (checking the use of money by) government departments - ผู้อำนวยการสำนักงานตรวจเงินแผ่นดิน

based : where the main work of an organisation, business, etc. is done or controlled - ซึ่งเป็นศูนย์กลาง

budget : an amount of money able to be spent on something - งบประมาณ

case : a matter that is being officially investigated, especially by the police - คดี

change : the money you get back when you buy something (and give a note higher than the value of what you bought) -

decision (noun): a choice or judgement that you make after thinking and talking about what is the best thing to do - การตัดสินใจ

detect : to notice, to discover or find out - พบได้, สังเกต

disciplinary action : punishment of people who do not obey the rules - การลงโทษเนื่องจากการฝ่าฝืนวินัย หรือระเบียบ

dispense : to give out something to people - จ่ายยาให้

division (noun): one part of a large company or organisation - แผนก

embezzle : to secretly take money that is in your care or that belongs to an organisation or business you work for - ยักยอกเงิน, ฉ้อโกงเงิน

examination (noun.): inspection, investigation, looking closely at the facts and details in a case in order to make a decision or judgement - การตรวจสอบ, การพิจารณาอย่างละเอียด

fraud : something (or someone) that deceives people by not being what it seems to be; bogus - ไม่แท้ การโกง การหลอกลวง

funds : money needed or available to spend on something - เงินทุน

gang (noun): a group of criminals who work together; a group of young people who spend time together causing trouble - แก๊ง, กลุ่มโจร

grounds : reasons for saying or doing something - เหตุผล

guidelines : official instructions or advice about how to do something - สิ่งที่ช่วยแนะแนวทางให้ปฏิบัติ

in office : serving in government after being elected or appointed -

investigators (noun): people whose jobs are to officially find out the facts about something - ผู้สอบสวน, ผู้สำรวจ, ผู้ตรวจสอบ

involved (verb): taking part or having a role in something - เกี่ยวข้อง, มีบทบาท

legal : relating to the law or lawyers - เกี่ยวกับกฎหมาย

maintenance : work that is done to keep something such as a building, machine, or piece of equipment repaired and in good condition - การซ่อมบำรุง

malpractice : careless or criminal behaviour by someone with a professional or official job - การประพฤติผิดต่อหน้าที่

nationwide : throughout a whole country - ทั่วทั้งประเทศ

officials : people who have the power to make decisions or enforce the law - เจ้าหน้าที่ผู้มีอำนาจ

oversee : to watch something in order to check that it works or happens in the way that it should - ตรวจตรา

pocket : to take or keep something, especially an amount of money, that does not or should not belong to you - เก็บเข้ากระเป๋า

raid : to use force to enter a place suddenly in order to arrest people or search for something such as illegal weapons or drugs - บุกเข้าจับ, เข้าตรวจค้น

scam : a dishonest plan, especially for getting money - กลโกง, แผนร้าย

shown up : caused to feel embarrassed because someone has done better - ถูกตีแผ่

similar : like somebody/something but not exactly the same - คล้ายกัน

summon : to officially order someone to come to a place - ออกหนังสือเรียกตัว

target (noun): an object, person, business, building, area, etc., that someone intends to attack, deal with or find - เป้าหมาย

transfer : to officially arrange for someone else to receive money or be the owner of something - โอน

treat : to behave in a particular way towards somebody/something - ปฏิบัติ(ต่อ)