It's official: Ariya is number one (Updated)

Ariya's Facebook page has been busy, full of praise from her many fans.

Ariya Jutanugarn took over top spot in the world rankings yesterday after winning the Manulife LPGA Classic title in Cambridge, Ontario on Sunday.

Ariya Jutanugarn took over top spot in the world rankings yesterday after winning the Manulife LPGA Classic title in Cambridge, Ontario on Sunday.

The 21-year-old from Bangkok dethroned New Zealand's Lydia Ko who had held the top ranking for 85 consecutive weeks.

She won praise from her compatriots including Prime Minister Prayut Chan-o-cha.

"The prime minister praises her for her success, which was a result of her determination," government spokesman Sansern Kaewkamnerd said.

He quoted Gen Prayut as saying that Ariya was not discouraged by a ranking miscalculation last week that saw her fail to take top spot.

"Pro May is an inspiration for Thai children to take up sports," Lt Gen Sansern quoted the premier as saying.

A large number of fans congratulated Ariya on her Facebook page using words such as "amazing" and "the best".

"You have written a new chapter in Thailand's sporting history," said one. "You have won the hearts of all Thais."

Ariya is still the first and only Thai to have won on the LPGA Tour.

The victory in Ontario is her first of the year and sixth of her career. 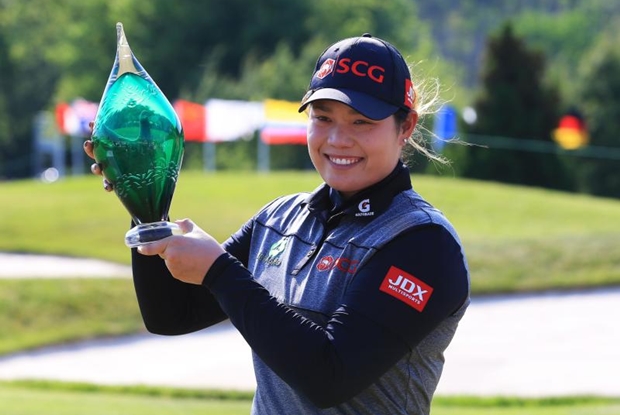 Ariya Jutanugarn of Thailand with the trophy after sinking her birdie putt on the 1st playoff hole to win during the final round of the Manulife LPGA Classic at Whistle Bear Golf Club on June 11, 2017 in Cambridge, Canada. /AFP/Vaughn Ridley

Golf: Brilliant Ariya on top of world with win in Canada 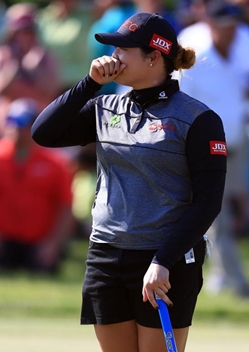 Ariya Jutanugarn of Thailand gets emotional after sinking her birdie putt on the 1st playoff hole to win during the final round of the Manulife LPGA Classic at Whistle Bear Golf Club on June 11, 2017 in Cambridge, Canada. The win ensures she will be the women' number one golfer. /AFP

Her dramatic win at Whistle Bear Golf Club in Cambridge, Ontario came after rival Lexi Thompson stumbled with four bogeys on the back nine which saw a four-shot lead evaporate.

On the first playoff hole, Thompson looked to have recovered her composure when she crushed a long tee shot 50 yards further than Ariya and South Korea's Chun In-Gee.

Ariya, who had underhit her tee shot into the fairway rough, hit her second onto the green.

Both Chun and Thompson then missed long birdie putts leaving Ariya with her shot at glory which she duly converted.

The result capped a rollercoaster week for the 21-year-old from Bangkok, who had wrongly been informed by the LPGA last week that she had taken the world number one ranking.

The LPGA later revealed she had not in fact taken the top spot from New Zealand's Lydia Ko because of a rankings miscalculation.

Thompson meanwhile was left reflecting on her third defeat in a playoff this season after she looked to be cruising to her second title of the year.

But back-to-back bogeys on the 12th and 13th holes gave her rivals hope before Thompson recovered with a birdie on the par-four 15th.

However a three-putt on the par-three 17th set up a tense finale with Thompson one shot clear.

After making the green in regulation, the American was left with two putts to win.

But her birdie putt rolled up short, leaving her with a four-footer for victory which she then missed, setting up the playoff drama.

Ariya had entered the playoff after a three-under-par final round 69 while Chun forced her way into contention with a two-under-par 70.