A tighter law on foreign workers has been announced with massive fines for employers who employ illegal workers.

The private sector says local companies, particularly small and medium-sized enterprises (SMEs), are likely to be hurt by this new law.

Thailand's ageing population, consequent labour shortages and hiring of migrant workers to cope with labour shortages means that the new labour law could cut Thai SMEs' competitive advantage at a time when the Thai economy has yet to fully recover.

WHAT IS THE NEW FINE?

The fines are imposed at progressive rates: the more migrant workers the employer has, the higher the fine the employer faces.

"We have got many complaints from our members that many companies, especially SMEs, were badly affected by the implementation of the Royal Decree on Recruitment of Foreigners [as it is called]," Mr Chen said, adding that the law took effect on June 23.

The new law is unlikely to harm giant companies because they have the resources to recruit foreigners in compliance with the new law, Mr Chen said.

Big fines fines could cause a huge burden for smaller SMES and reduce the competitive advantage of Thai SMEs, which are struggling to survive.

Chanintr Chalisarapong, the president of the Thai Tuna Industry Association (TTIA), said the new law will hurt not only employers but also employees, particularly migrant workers with lesser skills.

"And the lack of those migrant workers at a time that SMEs still need cheap labour to operate could mean disruptions to the Thai economy, which is on the recovery path," Mr Chanintr said.

The definition of "recruitment of foreigners" covers migrant workers and cheap labour brought in from the neighbouring countries of Cambodia, Laos, Myanmar and Vietnam.

Those labourers play a crucial role in production at Thai SMEs.

COULD CAUSE LABOUR SHORTAGE & INCREASED COSTS IN CONSTRUCTION SECTOR

"The new regulations may cause a labour shortage," Mr Thirapat said.

"Costs will also be higher because we rely on 80-90% alien workers."

Thai Chamber of Commerce (TCC) chairman Kalin Sarasin said his group and other private associations are brainstorming solutions and have sent word to the government demanding a quick response.

"At this stage, hundreds of TCC members are trying to evaluate the impact of this new law on their business," Mr Kalin said.

Chen Namchaisiri, chairman of the Federation of Thai Industries (FTI), said the FTI sent an open letter to the Labour Ministry requesting that related state agencies seek solutions and policies to reduce the adverse impact of tighter labour regulations.

According to the new law, the aim is to raise the standards of recruitment and management of labour and avoid accusations of abuse or even human trafficking by the international community.

The new law is the latest in a series of potentially greatly disruptive new policies and laws launched by the military regime without public consultation. The changes slated for the universal healthcare system is the latest example. Public hearings were only held at the end of the policy creation process which only allows for public rubberstamping of policy, not actual input making new laws responsive to public needs.

If the practice of informally employing illegal workers from neighbouring Burma, Laos and Cambodia is widespread, as it seems to be (even at local noodle shops), the law may simply be unenforceable or, as some have pointed out, merely provide opportunities for bribes and corruption for local officials selectively enforcing the law.

MORE THAN 2 MILLION MIGRANT WORKERS, MOST NOT PROPERLY REGISTERED

According to the TTIA, there are more than 2 million migrant workers in Thailand and most have yet to properly register and are likely in violation of the law.

"We demand that the government seek some rescue measures to reduce the adverse effects on the real sector [businesses, private  sector], which still badly needs those migrant workers, especially the SMEs," Mr Chanintr said. 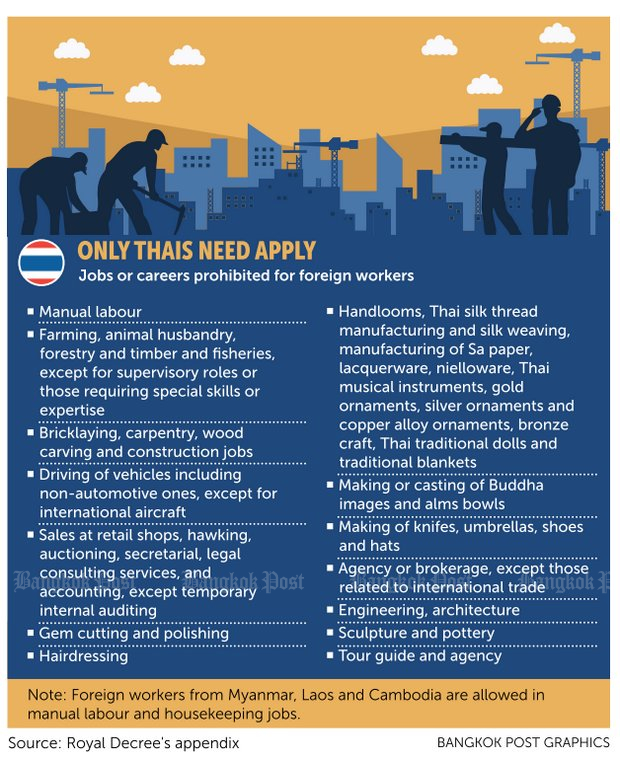 Thailand to get Russian, Pfizer vaccines