Online prankster Nathan Bartling has escaped with a 5,000 baht fine for placing coins on rail tracks, but he still faces a charge of animal cruelty. BENJAPOL AMORNJIRIASAK

Police on Wednesday fined online prankster Nathan Bartling and his friend 5,000 baht each for their stunt of placing coins on rail tracks for trains to run over – and a much higher fine for alleged cruelty to animals may follow.

Police on Wednesday fined online prankster Nathan Bartling, 24, and his friend 5,000 baht each for their stunt of placing coins on rail tracks for trains to run over – and a much higher fine for alleged cruelty to animals may follow.

At the Prawet station, police fined the American and his Thai friend Nat Veerothai, 22, for breaking the traffic law by placing obstructions on a transportation route in an unsafe or inconvenient manner, and violating the Railway and Highway Act by trespassing on the State Railway of Thailand's land and damaging its property.

At the station, Mr Bartling again apologised for their actions, saying he would continue to make video clips for his YouTube channel "My Mate Nate" -- but they would no longer "affect the feelings of Thai people".

Regarding his video clip of a cat fighting a scorpion, he said he bought the scorpion from a man who ate such animals on Khao San Road. He happened to notice the scorpion fighting the cat, he claimed, and just recorded them.

The scorpion's stinger had been removed, and he brought the cat to a veterinarian, who pronounced it healthy, Mr Bartling said.

Pol Col Alongkorn Sirisongkram, chief of the Prawet police, said on Tuesday Nathan Bartling would be charged with trespassng under a 1921 law on railways and highways and with cruelty to animals.

Mr Bartling has been told to report to Prawet police at 2pm on Wednesday to acknowledge the charges, the station chief said.

The trespassing charge carried a fine of 100 baht, he said.

He would ask the State Railway of Thailand if it also wanted to accuse Mr Bartling of damaging state property, as there were scratches left on the rails. 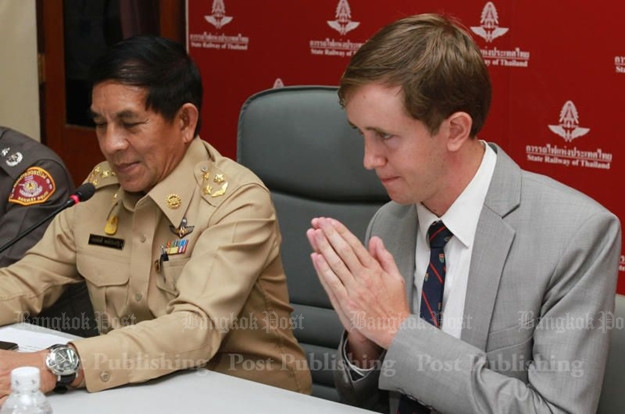 American Nathan Bartling, sitting next to deputy director of the State Railway of Thailand Tanongsak Pongprasert, makes a formal apology for his latest prank video in which he placed coins on a rail track for trains to run over. SOMCHAI POOMLARD

Police on Monday briefly detained and charged YouTube prankster Nathan Bartling, aka "My Mate Nate", with trespassing on railway land and damaging railway property by placing coins on a rail track for trains to run over.

The legal action came after Mr Bartling posted a video on his YouTube channel My Mate Nate on July 16 in which he claimed he set out to test the durability of coins from several countries by placing them on railway tracks so trains would run over them.

He specified he did not use Thai coins, which could have resulted in lese majeste charges. 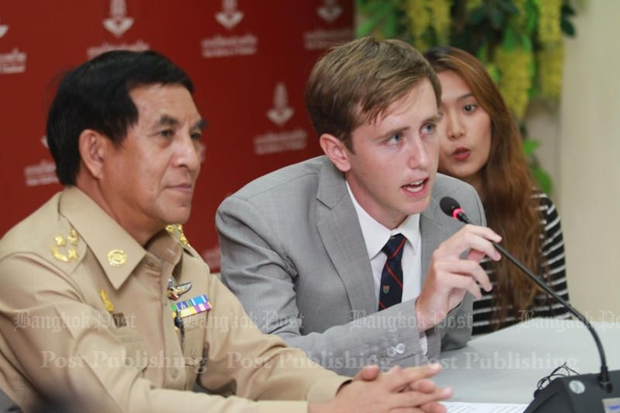 The video sparked widespread criticism accusing Mr Bartling of reckless behaviour, setting a bad example for youngsters and showing no regard for train passenger safety. He later removed the video.

On Monday, Mr Bartling visited the headquarters of the State Railway of Thailand, and formally apologised. He claimed his only intention was to test the coins' strength. Authorities are considering pressing more charges under the Criminal Code.

The stunt with the coins was not the first time the American has found himself in the spotlight. Among his videos have been one making fun of the English skills of Thai students and another showing a cat being made to fight a scorpion.

Mr Bartling's detractors are many and vociferous. Their latest act is a petition to the government to remove the visa of the American, and throw him out of the country. 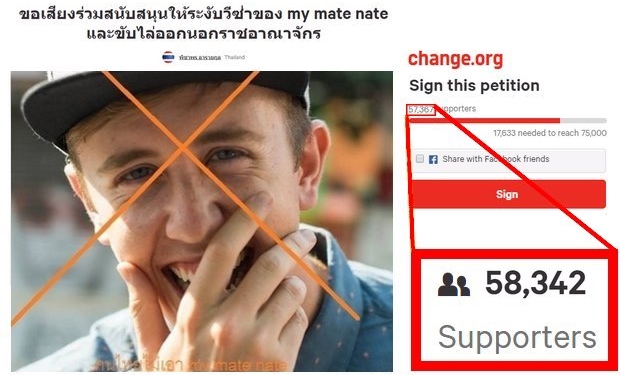 The Change.org petition calling for Nathan's visa to be revoked.


The Change.org petition at http://bit.ly/2vqtUBz had attracted more than 58,000 supportive signatures by midnight Monday.

He is impervious to criticism, his "apologies" are weaselly and arguably insincere "explanations" of offensive actions, and even his comments on his undeniable law-breaking with the railways are far more smart-aleck than smart. He posted the SRT's statement on the coins on the track with this bland reply: "Good to know. Thanks for helping us understand."

The frequently offensive American has turned a part-time gig of YouTube video-making into a job, already earning handsome profits at YouTube alone.

He has 3.3 million followers on the Google-owned service, and his videos attract up to 10 million viewers each.  Viewing a video one time triggers up to 17 adverts – each resulting in a small payment to Mr Bartling. If a viewer clicks on an advertisement, it's a much bigger payoff.

Thai law requires internet-based workers to have a work permit, which he has never had. He said he is seeking a work permit to work at My Mate Nate Studio and expects to get it soon.

But in addition to his apparently illegal online work, Mr Bartling also runs a "souvenir" business from his various websites including YouTube, where he advertises and sells "My Mate Nate merchandise" such as caps (400 baht) T-shirts (350 baht) and, weirdly, a branded drone model that has his cartoon image on the top. It costs 1,990 baht.

Mr Bartling admits he has never had a work permit. But, merchandise sales aside, he has a non-trivial income from his online activities.

It is impossible to pinpoint that income. Industry watchers Tubefilter.com figures that the 1,000 top-earning YouTube channels in the world receive an annual average income from Google of $23,000, or more than 800,000 baht. Mr Bartling's viewers, subscribers and commenters are well above the average required to earn that figure.

But there's more. Mr Bartling's Facebook account has nearly a million followers (997,137, as of midnight Monday). He receives advertising commissions on that site, and he also uses Facebook to sell his merchandise.

An actual website touts his YouTube-Facebook sites and – no surprise – sells his merchandise. It also promotes his original business ideas such as for-hire video production. And his merchandise.

So far, the 24-year-old YouTuber has been legally charged with two offences under the SRT Act – illegal entry onto State Railway of Thailand (SRT) premises and causing damage to the rail track and SRT property.

If he is charged and found guilty, he could face up to seven years in prison and a fine of 14,000 baht.

In a press conference Monday, Mr Bartling said  "I could have got a flight home, but I'm not running from the problem. I'm taking responsibility, and I'll continue to make videos."

Monday evening, immigration police took Mr Bartling to the Immigration Bureau to check his entry documents. They found he holds a Non-B visa and is seeking an extension to his stay.

The authorities later released him.